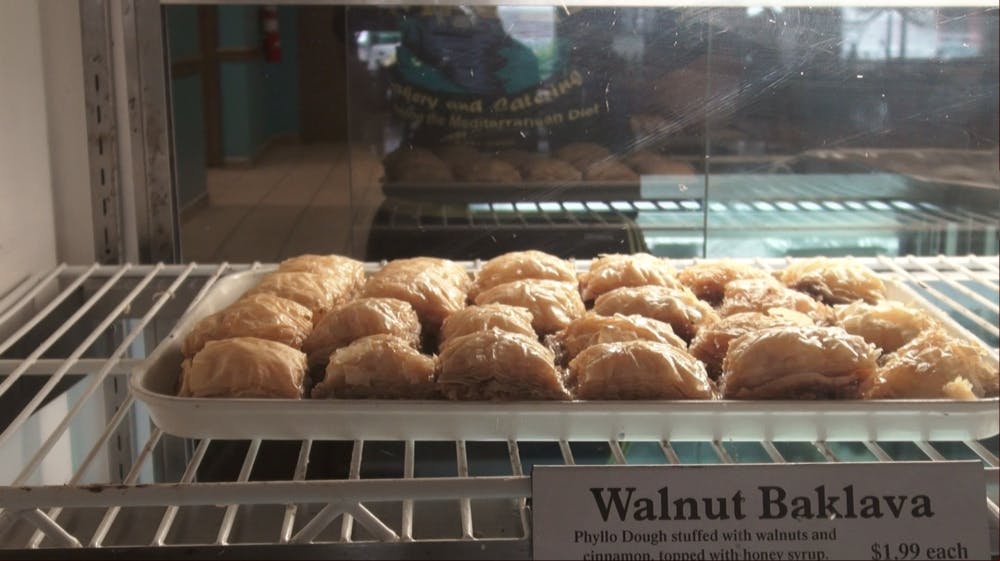 
Walnut Baklava on display in the West Franklin Street location of Mediterranean Deli. The deli will open its second location in Downtown Elon in the coming months.

Jerusalem native Jamil Kadoura came to the United States in 1978 to fulfill his American dream and learn business management. Now, the owner of Mediterranean Deli, Bakery and Catering in Chapel Hill is bringing his business to downtown Elon.

“I started as a dishwasher actually when I was a student,” Kadoura said. “I started getting promotions to assistant cook then assistant chef and sous chef. I became a dining room manager. And I worked everywhere in the house — the back of the house, the front of the house.”

After college, Kadoura was transferred from Minneapolis to the Sheraton Crabtree Hotel in Raleigh. He became the director of food and beverage, which is the highest position in the food industry.

“I wound up at a nice hotel called Hotel Europa in Chapel Hill,” Kadoura said. “After that, I wanted to go on my own and I opened the deli.”

His deli began as a 12-seat restaurant. He has expanded the West Franklin Street location five times as his company has grown over the years. Elon will be his second location.

Kadoura said there’s more to restaurants than just food, such as cost controls.

“At the end of the day, you have to make money to survive. Otherwise, you are not going to survive. It’s a very dangerous business; it’s not easy to run.”

Management and consistency are the two elements Kadoura believes a business needs to be successful.

“This is the most difficult thing in restaurants — to be consistent in your food first and your service,” Kadoura said. “When a customer tastes the hummus here, he likes it. He wants to come back for the same hummus. If it’s not the same experience, you’re going to lose that customer.”

For 26 years, Kadoura has maintained consistency with his products, including hummus, tabouleh, cheese pies, falafel, chicken shawarma, baklava and more.

The general manager of 16 years at the Chapel Hill location will run the Mediterranean Deli at Elon. Kadoura knows he will sell all these products and more with consistency.

His location in Elon will have 6,300 square feet. After his five expansions in Chapel Hill, he has 8,000 square feet. The dining area will remain the same size, but the market will be smaller.

“We cannot afford to be smaller in our kitchen,” Kadoura said, “Our kitchen, we can’t compromise on that, so we are going to get our grocery a little smaller.”

But size of the location doesn’t impact his excitement.

“I wanted to be very successful at Elon because I love the challenge first, and I see it’s going to do really well, and sometimes I tell myself it’s going to do better than this one here,” Kadoura said.