Charlotte Smith has evolved as a coach while evolving Elon's program over the last six years. 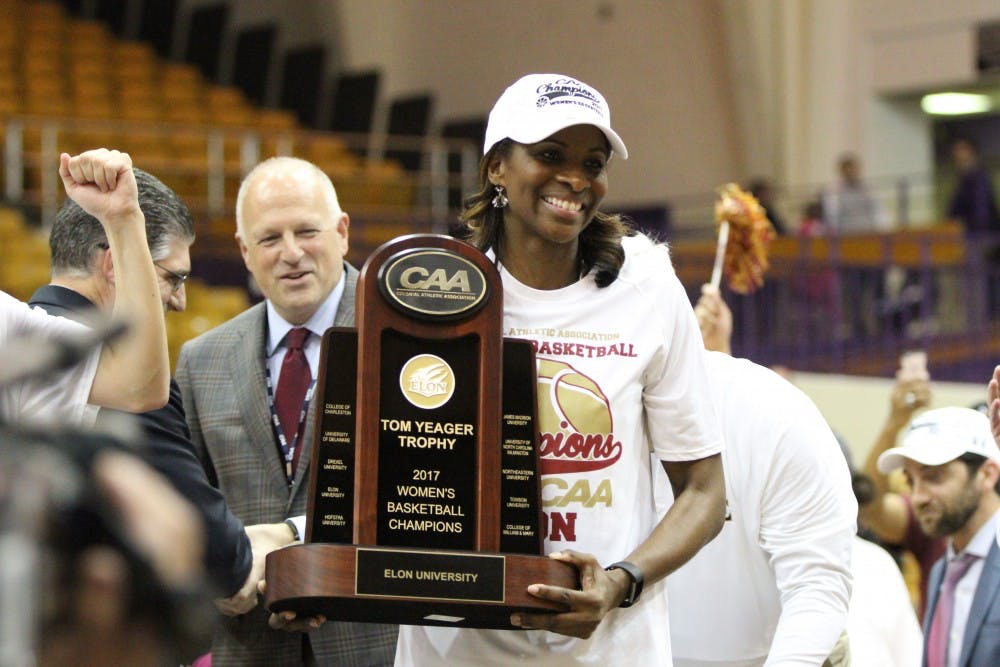 It’s the last day of summer workouts for the Elon University women’s basketball team, and the coaching staff wants to do something fun.

They play some competitive three-on-three games before assistant coaches Tasha Taylor and Josh Wick and head coach Charlotte Smith team up and hit the court.

Smith, the former All-American at the University of North Carolina at Chapel Hill, turns her already high level of competitiveness up a notch, and that team dominates.

They’d lose all but two games, maybe, that day. Total.

“She made sure of that,” Wick said.

Thus is the norm for Smith, in her sixth year leading the Phoenix. It’s not uncommon for her to grab her shorts and basketball shoes and start playing with the team, going through rebounding drills or forcing them to guard her.

She arrived at Elon in 2011 with a clear vision of where she wanted to take the program, and she's now fulfilled that vision. The Phoenix won the Colonial Athletic Association Tournament on Saturday with a commanding 78-60 victory over three-time reigning champ James Madison University, a performance rife with the foundation of Smith’s philosophy — defense and rebounding.

Her competitive drive has brought her here, as she prepares for her first NCAA Tournament game as a head coach.

But she’s been at this stage before. To see the coach Smith has become, it’s necessary to look back at a career that began with a high schooler who could jump, then catapulted into the spotlight with the greatest shot in women’s college basketball history and now, finally, has led to long nights in the film room at a place where she found peace.

This is her path.

Sylvia Hatchell’s father had heard of this player from Shelby, North Carolina, not far from her hometown of Gastonia, that was as impressive as anyone.

Hatchell was a few years into her tenure as the coach at UNC Chapel Hill, and she couldn’t resist the intrigue of someone that good from a place so close to her home. She went to Shelby High School to see her.

Smith went up for the jump ball to start the game, and Hatchell was sold.

“The referee tossed the ball up, and Charlotte jumped center. I was like, 'Is this kid ever going to come down?'” Hatchell said. “She was only about 5-11, but she could dunk the ball, jump out of the gym.”

Soon enough, Smith was in Chapel Hill playing for the eventual Hall of Fame coach, who this year completed her 31st season coaching the Tar Heels. And as a junior, Smith would make the shot that’d change her life and thrust her into stardom.

Smith led the Tar Heels to the national championship game. With UNC down two to Lousiana Tech University and just seven-tenths of a second remaining, Hatchell did something uncharacteristic — she called a play where Smith, a forward, was going to shoot a 3-pointer.

Smith started out on the left block, cut through the lane and found herself wide open on the right wing. She took the pass, calmly loaded up and buried the shot.

“I knew, as competitive as she was, if anybody would make it, it’d be Charlotte,” Hatchell said. “She made a shot that changed my life.

Smith also grabbed 23 rebounds that game. She’s since watched the film of that game, and she’s not satisfied — she thinks she could’ve pulled down five more.

It’s that drive and hunger that she’d carry over to her coaching days, which began as an assistant under Hatchell in 2002. Smith wants her players to strive for excellence, and be thinking about championships. That’s why she mentioned winning one when she was introduced as Elon’s head coach in 2011.

“That’s the mentality that you have to have in order to be a champion,” Smith said. “You always have to want more and try to look for ways to be the best you can be.”

Junior guard Shay Burnett has heard it once or twice.

Burnett knows Smith won the national championship. She knows she played in the WNBA. And she knows she coached under Hatchell and with USA Basketball.

“She reminds us of it all the time,” Burnett said. “She’s like, ‘I’m the champion.’ Now, we’re the champions. Now we know the feeling.”

But that didn’t come easy.

Smith has always connected with her players in a special way, particularly because she can directly relate to what they’re going through. She played collegiately, so she knows the struggles. That’s something she’s used to her advantage since she started at UNC.

“Her coaching style has evolved over the last six years or so,” said Wick, who was a video coordinator for three years at UNC while Smith was an assistant there. “She’s always been a great teacher and great developer of the game and the skills to play the game.

“To see her grow in that area to where, OK, let me try to convey this in a way that’s conducive for you to grasp it and understand it a little bit more, has really helped.”

Smith credits the strides Elon has taken to successful recruiting. In her six years, she’s won more than 100 games and taken the Phoenix to the WNIT twice — and now the NCAA Tournament.

The program is at heights it’s never seen before. This season, the Phoenix shattered program records for overall wins and conference wins, won a regular-season championship for the first time in 35 years then went on to earn the school’s first NCAA Tournament bid.

Smith said it was an adjustment from playing to coaching, navigating the different schedules and learning from Hatchell how to manage a program.

Then, after nine years at UNC, she was looking for head coaching positions. She interviewed at a number of schools, but the people she met while at Elon sold her.

“After I left from my campus interview, I felt a sense of peace,” Smith said. “I knew leaving here that this would be the job for me.”

She made an impact on her players from the start. They know she’s never satisfied, but they’ve bought into the idea that they should trust what she’s saying because of all she’s accomplished.

Back when Smith was still at UNC, current Elon senior forward Lenaira Ruffin would attend Tar Heels games, and met Smith while on a tour with Hatchell. Something about Smith stuck with Ruffin.

Years later, Ruffin is now a key part of Elon’s rebounding force. The Phoenix has been successful this year largely because it’s executed Smith’s two pillars of basketball, defense and rebounding, exceptionally well.

The players respect Smith, who shared bear hugs, selfies and dance moves with her in celebrating the CAA Championship victory at James Madison.

“Her energy, just being around her just gave me this glow,” Ruffin said. “Coach Smith has been very encouraging, very inspiring. She’s tough, but tough in a good way. She helped me grow into a better athlete, but most importantly, a better woman.”

Smith’s coaching progress faces its latest test Friday in College Park, Maryland, when the 11th-seeded Phoenix squares off with sixth-seeded West Virginia University in the first round of the NCAA Tournament.

It’s a match-up familiar to Elon — it’s lost to the Mountaineers in two of the last three years, including a 67-57 defeat in December 2015.

Smith will have some anxious fans watching.

“Like a peacock with its feathers out, I’ll be proud of her,” said Hatchell, whom Smith refers to as a second mother. “When that ball is tossed up, that girl is all in. 100 percent focused, competitive. I would not want to play them. They will be ready. She will make sure they will be ready.”

Smith said her time with USA Basketball last summer was perhaps when she grew the most as a coach. That experience opened her eyes to different systems to run and how others coach the game.

She’s grown, too, from her time as a film rat. She couldn’t wait to get her hands on the tape of Elon’s rout of James Madison on Saturday.

“Her vision is so great,” said Cristy McKinney, an assistant under Smith who remembers her as a player and coached against her when she was at Clemson University and Smith was at UNC. “That’s the key thing for me. The vision she had coming in, the way she was just so determined to make that vision become reality.

“She just approached every task, every day with the vision of being a champion.”

Smith has made sure after winning the regular-season and tournament titles this year, alumna of the program had a chance to cut down the nets. She thought Elon had the capability to win the championship last year.

But this group has the confidence, she said. They saw Towson University and College of William & Mary beat James Madison and wondered, why isn’t that us?

That’s just what Smith has been teaching, coaching, preaching since she arrived at Elon.

So what will she tell her team before it plays in the biggest game of their careers?

“Don’t get in over your head,” Smith said. “Take it all in. Enjoy it. Take a lot of pictures. Create a lot of memories. But at the same time, remember it’s a business trip and not a field trip.

“You don’t have to do anything extra special to be competitive, to win. … Go in and be your authentic selves. Continue to do what we did in the CAA Tournament, and let everything else fall into place.”

Elon will take the advice to heart. Smith’s been here before.

And she’ll likely be back.