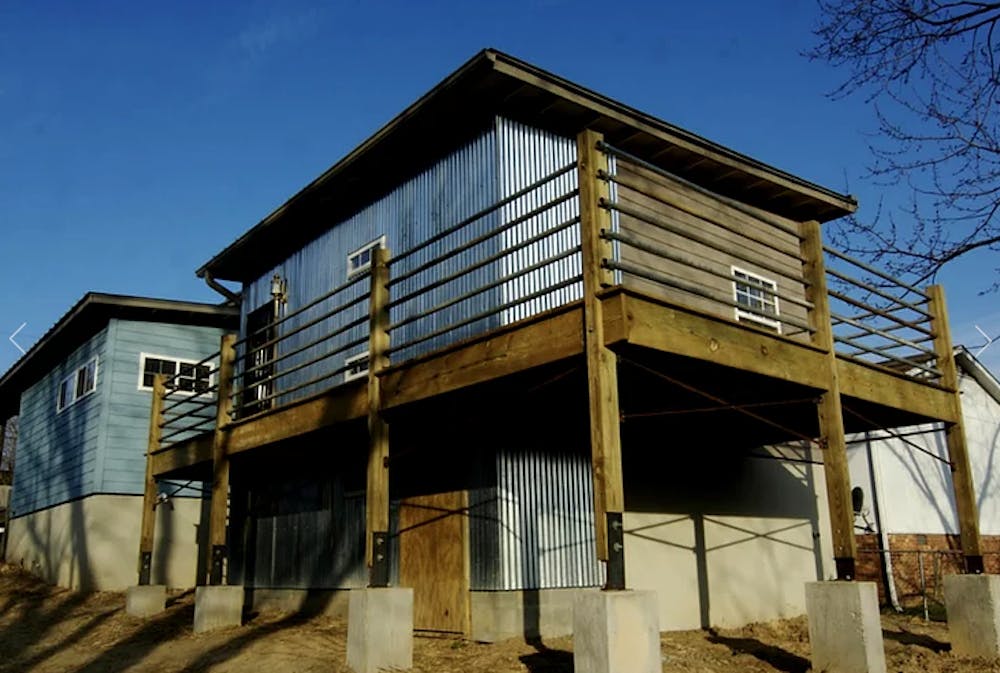 Robert Charest designed this home at 909 Dillard St. as part of a housing replacement project. Photo courtesy of Robert Charest.

Robert Charest, associate professor of environmental studies, has known since he was young that he wanted to be an architect — and was especially interested in the aspect of sustainable design.

“I was always interested in small tiny houses and reclaiming materials,” Charest said.

This interest lead him to study design at the Université de Montréal, where he pursued a Bachelor of Architecture. He also earned a post-professional Master of Architecture in History and Theory from McGill University in Montreal.

Charest studied design at the Universite de Montreal, where he pursued a Bachelor of Architecture.

He brings these aspects to the classes he teaches, such as “Sustainable Architecture” and “Humans and Nature.”

Charest has been involved in sustainable agriculture for the majority of his life, continually looking to use reusable and the most durable resources when building. Before coming to Elon, he lived in Canada, where he built a tiny house that he lived in for six years.

“I built my first tiny house when I was in my late teens,” Charest said. “I still own a tiny log cabin in the mountains of Quebec. My father was a builder, as were my grandfather and great-grandfather.”

He picked up on this passion of building and designing by watching his grandfather, who Charest said was always interested in improving the quality of buildings, and who was a consultant for Hydro-Quebec, an energy company in Canada.

While teaching at the University of North Carolina at Greensboro in 2005, Charest founded and directed the Urban Studio, a community-oriented design-build effort where projects are created to combat housing issues. He was a part of the organization until 2011.

He has since brought the program to Elon University, renaming it the NEW Urban Studio with the Container Space at Elon’s Environmental Center at Loy Farm, its home base built by him and his students. The idea is for students to have a deeper connection with architecture, design and the environment.

During his time at Elon, Charest was one of the various faculty members who helped found the Environmental Center at Loy Farm. He co-wrote many of the grants that went toward the funding of Loy Farm, and penned the initial “EcoHub Manifesto,” which is a living-learning model for responsible design.

Jessica Bilecki, assistant director for education and outreach in the Office of Sustainability, leads tours at the Loy Farm. Charest’s designs are one of the major stops on the tour.

“From my perspective, the most powerful contributions of Professor Charest’s design contributions to the campus community are not the structures themselves, but the experiential learning that results,” Bilecki said. “His work pushes students from any major to think about designing things smarter so that they are affordable, have a low environmental impact and have a positive impact on the people involved in and with the structures.”

The skills that Charest’s students learn can be applied to all aspects and fields of life.

Outside of Elon, Charest is the principal of Atelier Charest & Associates LLC, an architecture company with a focus in sustainable design and affordable housing projects.