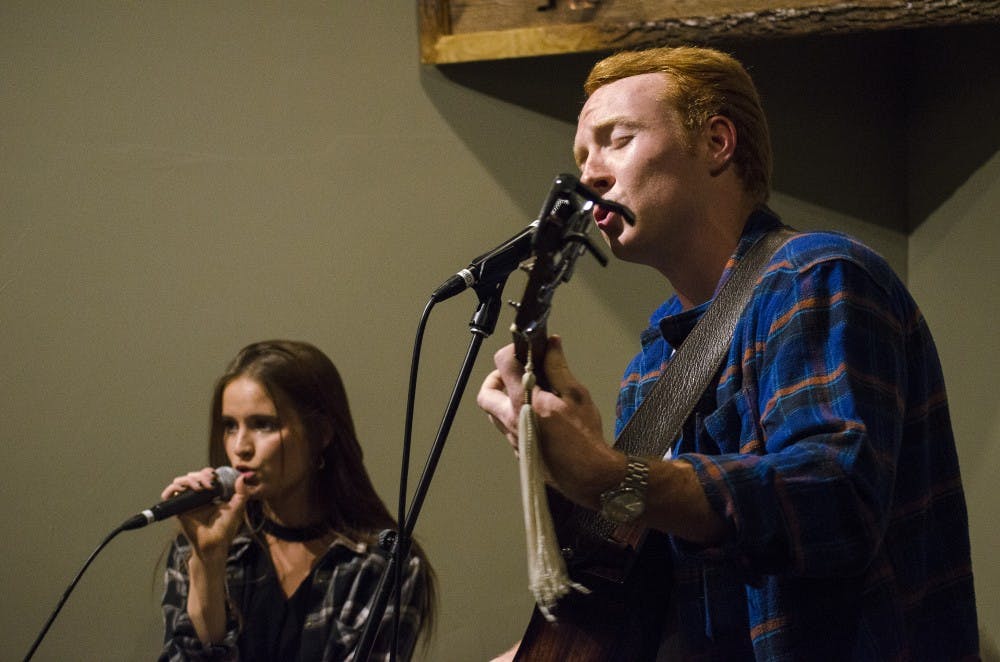 With a keen passion for music, especially for acoustic guitar, senior Eason Warren made his musical dreams a reality 9 p.m. March 10 at The Oak House. He and junior Rosie Darling performed in front of a crowd of more than 50 people.

Warren was first introduced to the guitar at 10 years old and said he immediately fell in love with the instrument and its beautiful sound.

“The acoustic guitar is where my heart lies,” Warren said.

Further pursuing this musical passion 11 years later, Warren has performed in public only six times: once in high school, once at a coffee shop in Chapel Hill and four times at The Oak House.

Since Phil Smith, owner of The Oak House, told Warren his last performance was the most profitable flight night the coffee house has had, he asked Warren to share his musical talent with his customers again.

Warren said he happily agreed and asked Darling to accompany him.

The performance comprised 18 songs with four original pieces that Warren and Darling composed together. Among these musical numbers, they played songs by Justin Bieber, the Chainsmokers and other well-known bands and artists.

At the venue, Warren mainly played the guitar while Darling sang, but both musicians shared their singing and guitar-playing abilities with the crowd throughout the performance.

While working during Warren and Darling’s performance, Jacob Schmiederer, shift manager at The Oak House, said listening to the songs was an enjoyable experience.

“I thought they performed fantastically,” Schmiederer said. “Every time we have them perform, they always pull in huge crowds and crowds that seem to really enjoy their performance. People come just to see them.”

As one of the audience members, junior Jenaye Alston said the performance was engaging and entertaining.

“Eason is awesome on the guitar,” Alston said. “You can tell he puts his heart and soul into playing and that he has a real passion for it.”

Before Warren presented his songs to the coffee shop in Elon, he practiced every day for two weeks with Darling.

Without a mentor guiding him, Warren said he and Darling initiated, scheduled and organized these practices on their own.

But Warren acknowledged that these practices and performances would not be possible without Elon, its community and its opportunities.

With connections in the School of Communications, Warren said performances such as the one at The Oak House become more well known with the assistance of public relations students sharing his videos and helping him get publicity.

Other communications students helped Warren with the filming aspect by shooting and editing videos of him performing.

Elon has also provided Warren with support and talented musicians, which he said enhances his love for music and his commitment to continue performing.

“The culture and people here have been so awesome,” Warren said. “Just finding random talent here in random places has been a really awesome experience.”

As a senior pursuing a major in international business and finance, Warren said he will continue pursuing his passion for music while at Elon. In the next couple of months, he is playing in a sound show in Raleigh, shooting videos for his original songs and applying for the MTV Cover of the Month.

With a future that includes additional performances and music, Warren said he wants to continue sharing his love of music with others.

“Music is a really beautiful thing that brings people together,” Warren said. “I write songs to be enjoyed by others, and a lot of the time, that doesn’t happen unless they’re sitting there listening, so putting on these performances is a chance for everyone to share in the music.