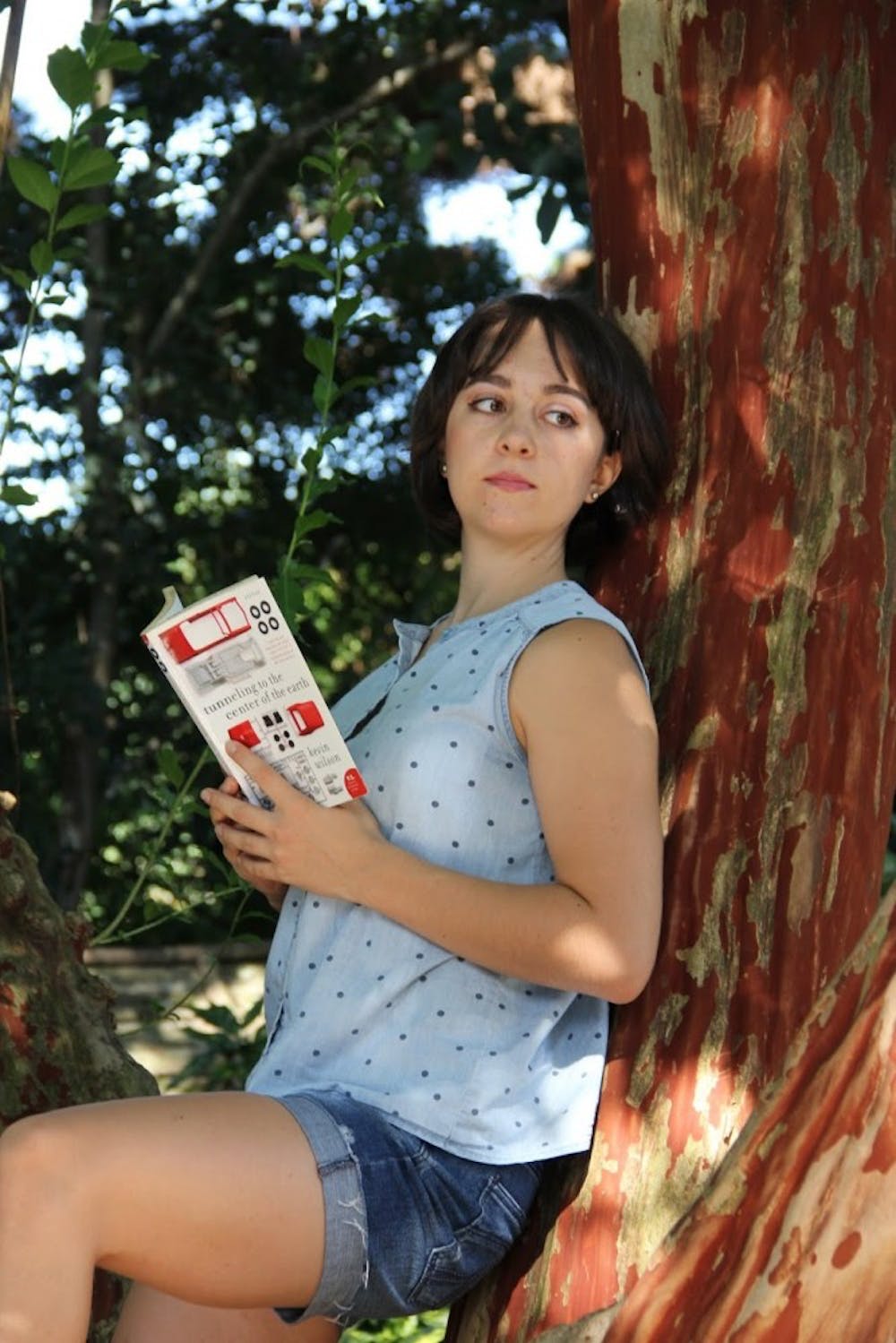 Junior Emily DeMaioNewton has been reading books since she was little. And today, she has become the author.

DeMaioNewton, a Lumen Scholar, has been researching the influence that storytelling has on resilience to shame. Initially, she proposed traditional research, she decided to speak with various individuals about their lives in order to understand experiences other than her own.

From there she plans to write her own work of fiction.

“If you can come up with a theory that works, that’s really good to know, but I’m interested in how that plays out into other peoples lives,” DeMaioNewton said.

Her research was inspired by her own relationship with reading.

DeMaioNewton grew up around stories and writing. When she was younger, she was raised by a reading specialist mother and storytelling father. She said always being surrounded by books drew her to writing.

“Reading books is what kept me a hopeful person,” DeMaioNewton said. “When I think about how literature has influenced my own life it really is what has kept me hopeful and has helped me understand the world in a realistic way.”

Now that she’s older, she wants to contribute to the literary community by writing fiction.

The goal of her project is to help people start a conversation about the difficult parts of their lives.

“When people shared their stories about what they felt ashamed of about themselves it opens up the opportunity for other people to say, ‘I feel that too,’” DeMaioNewton said.

She believes that stories are easy for people to connect with and hopes that people will read her work and feel less alone.

The subject matter of her stories is not always easy — commonly delving into issues of loss and family dynamics. But she said looking at the heavy material through writing helps her see it in a different light.

“I think I need it to be in the context of beauty, so I can stay sane and happy,” she said.

DeMaioNewton often focuses on the most difficult moments in people’s lives, but her passion for the project helps her continue.

“Emily is the sort of student everyone should aspire to be — endlessly curious and with a fierce, formidable work ethic,” said Drew Perry, associate professor of English and DeMaioNewton’s project advisor.

Her project is not limited to just writing. DeMaioNewton is also recording the interviews, which she will turn into a podcast.

The idea behind the podcast is to ask others how they get out of bed on the days that are the toughest. She believes these feelings are universal and relatable and wants to learn about other people’s experiences besides her own.

“I’ve only had my experiences of going a traditional route of going to high school and going to college, so I don’t have those very strange or unique experiences that some people have,” DeMaioNewton said. “That’s why I need to talk to other people to see these other parts of the world that I haven’t gotten to yet.”

While she plans to compile the interviews separately, the stories she hears still influence her writing, allowing her to understand experiences she’s never had herself.

“I have never been divorced personally,” DeMaioNewton said. “I have nowhere to start to think about that, but if I talk to somebody who has been and learn all the emotions that go into that, it gives me more of a chance of writing that accurately.”

DeMaioNewton hopes to find more people to interview soon, and one of her stories will be featured in the upcoming issue of Colonnades, Elon’s literary magazine.

“It doesn’t have to be that you get a bestselling book,” DeMaioNewton said. “It would just be important to me if maybe two people read something that I wrote and felt a little more comfortable in the world because of it.”