Journey has Elon on cusp of CAA title

The Phoenix has bought into Charlotte Smith's system, and will play James Madison on Saturday night for the CAA Championship. 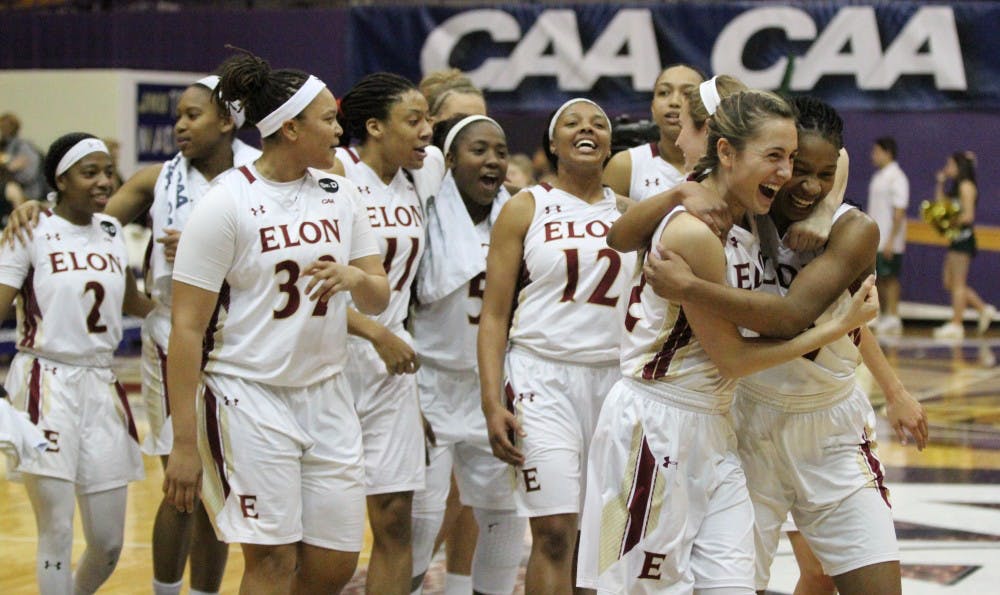 HARRISONBURG, Va. — Each morning Jenifer Rhodes wakes up, the reality sinks in even more, with the Elon University women’s basketball team progressing through what’s already been a historic year.

The senior forward needs her roommate, senior guard Essence Baucom, to calm her nerves a bit.

The journey of how Elon arrived here begins with the hiring of coach Charlotte Smith, continues with the recruiting of championship-minded, well-rounded players and culminates tonight, when the Phoenix looks to dethrone the three-time reigning CAA Tournament champion James Madison University on its home court.

It’s a tale of camaraderie, buying into the system and a group of veteran players who have been in similar situations, but never accomplished this end goal.

Now is their shot.

“It’s just exciting,” Rhodes said. “We have five seniors on the team, three juniors. We know what it’s like to want it so bad. It’s been so long. We’re fighting for the so many people that want it.”

Smith was hired in June 2011 away from her alma mater, the University of North Carolina at Chapel Hill, where she served as an assistant for nine seasons under Hall of Fame coach Sylvia Hatchell.

She was groomed with a winning mentality. Not only did the Tar Heels win four Atlantic Coast Conference titles and make the NCAA Tournament all nine years she coached in Chapel Hill, but Smith is also the most decorated player in North Carolina history.

She’s best known for hitting the buzzer-beating 3-pointer to give the Tar Heels the 1994 national championship over Louisiana Tech University.

So when she came to Elon, she knew the formula. And she professed a hunger for championships from the get-go, mentioning it at her introductory press conference.

“We want to bring a championship-level of basketball to Elon University,” Smith said then. “Winning isn’t everything, but I can tell you from experience, it sure does feel good to win.”

Smith referenced that moment after the Phoenix clinched the CAA regular-season title with a victory over the University of North Carolina at Wilmington last week.

But this year’s been special. The Phoenix has already surpassed the mark for most wins in a season, both overall and in conference play, in its Division I era. Smith was named CAA Coach of the Year for leading Elon to the top seed in the CAA Tournament.

“We really just reiterate over and over the importance of being a team,” she said. “We’re better together. They’ve bought into that. That’s stemmed into a lot of success for us.”

Rhodes fit the bill of the player Smith wanted to recruit to Elon.

She helped lead Pinewood Prep (North Charleston, South Carolina) to three South Carolina Independent School state championships while setting school records for blocked shots and rebounds. In addition, she was on the Headmaster’s List and the Faculty Honor Roll.

Senior guard Lauren Brown was in the same light. She was MVP of the region tournament her senior year at Alpharetta High School outside Atlanta, and led her team to a first-place region finish as a junior. Off the court, while at Elon, she’s conducted research with Elon BrainCARE on concussions.

In short, Smith wanted players already in a championship state of mind who were good people on and off the court.

“When you’ve been there and done it before, you know what it takes,” Rhodes said. “You know the urgency that’s needed, and the focus and teamwork that’s needed to make a championship team.”

Four years ago, Rhodes and Brown became the foundation of the team that’s now one win away from taking Elon to the NCAA Tournament. They landed at Elon with fellow senior guard Lenaira Ruffin, who’s from Burlington and helped River Mill Academy to three conference regular-season and tournament titles.

Rhodes and Brown started for the Phoenix during their freshman year. They’ve since been joined by Baucom, a transfer from the University of Alabama-Birmingham, and guard Maddie McCallie, a transfer from Miami University, to form a five-member senior class laden with experience.

Then there’s the junior class. Guard Shay Burnett has transformed into one of the CAA’s best players, and forward Malaya Johnson has been a consistent force in the post beside Rhodes since day one.

Meme Garner has made an impact in her first season with Elon after transferring from the University of North Carolina at Charlotte, developing a knack for 3-point shooting (40 percent from beyond the arc).

Don’t forget freshman guard Jada Graves, who’s excelled at the point in a back-up role for the Phoenix.

Put that all together, and it’s an experienced team that isn’t fazed by the spotlight.

The Phoenix played UNC and Duke University tight this year, losing by five and seven, respectively, in consecutive games in December. Elon beat Rutgers and Hall of Fame coach C. Vivian Stringer at home in November.

“It starts with the character of the players,” Smith said. “I have some great players, some outstanding people. That’s one of the things we wanted to focus on in the recruiting process. We wanted to make sure we’re not only bringing great players, but great people.

“We have players that are capable of stepping up every night and just taking over a game. They don’t have to because we are so balanced.”

It’s easy to see how much Elon enjoys playing with each other.

There are always smiles after big 3-pointers, or drives through the lane that end in a trip to the free throw line.

As the Phoenix was thumping College of William & Mary in the CAA semifinals Friday, Brown drove to the paint, pump-faked then went up and scored, drawing the foul. She chest-bumped Rhodes and Baucom in celebration.

Through all the honors and recognition of the past weeks, Elon’s been sure to note the importance of buying into Smith’s system and everyone being on the same page with one another.

Smith has always preached defense and rebounding as the two things a team can control during a game. She makes it a goal for the Phoenix to hold the edge on the boards and to hold the opponent under 40 percent from the field each game.

This team does both of those well. Elon’s held its opponent under 40 percent in 20 of its 32 games, and out-rebounded them 23 times.

“I truly feel there's not a better time to be a Phoenix,” Brown said. “It’s unbelievable to be on a team where everyone is buying in and everyone wants the same thing and really has the mentality that the team is more important than themselves. It’s a phenomenal feeling.”

Elon’s shown that thus far in the CAA Tournament, with dominant victories over Hofstra University and William & Mary. The Phoenix had four players in double-figures in both those games, but it was a different pair leading the way each game.

Against Hofstra, Baucom was efficient from the field, making all three of her 3-point attempts and scoring 15 points. Rhodes added 14 while grabbing seven rebounds.

Brown opened up on a tear against the Tribe. She made her first eight shots en route to 19 first-half points and 25 overall. Burnett was crisp from the field with a sharp eye, pouring in 20 points while dishing out five assists.

“I think that’s due to the fact that we’ve played with each other,” Rhodes said. “It’s a great feeling to be in sync with everybody. I’m so happy it’s coming together right now.”

The last test blocking the Phoenix from a guaranteed spot in the Big Dance is a familiar one, and one that hasn’t been so kind.

James Madison is the CAA’s benchmark in women’s basketball. The Dukes have won three straight CAA Tournament titles, and five of the last seven. They’re led by senior guard Precious Hall, the two-time CAA Player of the Year.

And Elon has never beaten them.

The Phoenix has lost all seven meetings with the Dukes since joining the CAA. The last five have all been by seven points or less.

Thanks to the CAA moving the tournament back to predetermined campus sites, Elon will have to beat the Dukes on their home court, one known for its raucous atmosphere and lively pep band.

Rhodes acknowledged while watching James Madison come back to edge Drexel University in the semifinals that there will be some butterflies during the day Saturday. That’s understandable. It’s the biggest game Elon has played in since joining the Division I ranks.

But they likely won’t be there once the Phoenix takes the court.

These players have played in these situations before. They’ve bought into the system, and can execute it flawlessly. More than anything, they’ll enjoy being out there together — and will show it.

That embodies this year’s team, distinguishing it from a group that was bounced from its first game of the CAA Tournament last year and one that lost a tight one to James Madison two years ago in the semifinals.

This is its moment.

“We’ve had the talent,” Rhodes said. “We didn’t have the leadership and the veterans that we needed to come forth. Now we have five seniors that are great players. I’m not afraid to say this, but I think we have the best talent on the team in the CAA.

“With that, and the veterans we have, and the leadership, this is our time. This is our year. We need to focus and get it done.”