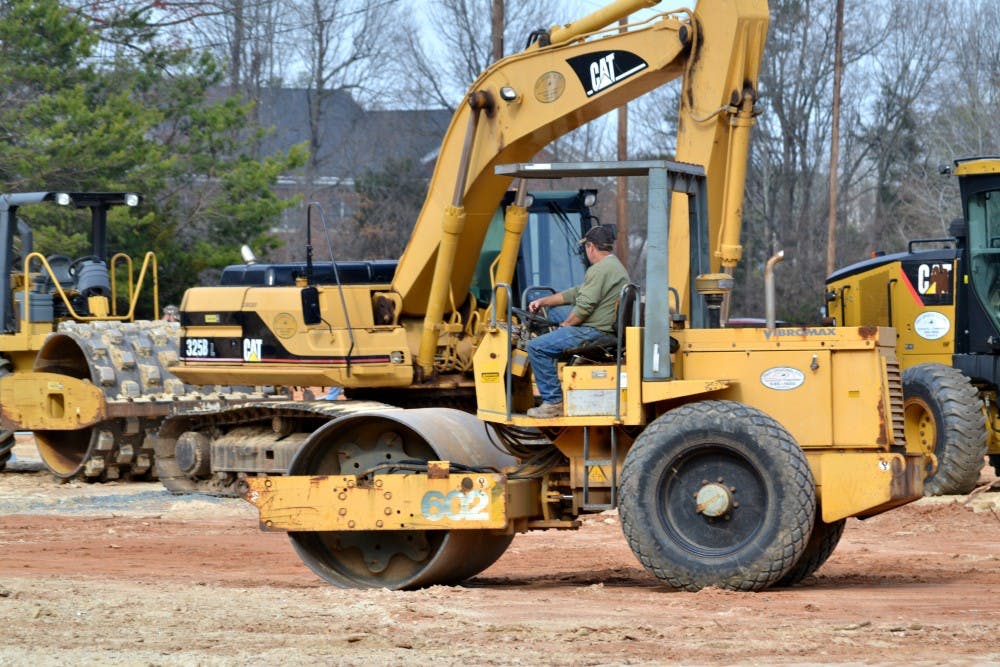 
Construction workers pave the ground to make way for a parking lot.

As Elon University continues to expand its campus, trees are being cut down to make room for new buildings and facilities.

Last month, the university began construction of a new parking lot next to the McMichael building. This new parking lot will add 165 parking spots for faculty, staff and visitors, Dan Anderson, vice president of University Communications, said in February. And construction is set to begin on Sankey Hall this summer. This new building will take the place of many parking spots in the existing visitors’ lot.

For many, physical expansion is of great value to the university. According to Paul Moersdorf, adjunct assistant professor of physics, it is often easy to overlook the value that trees have on campus as well.

“However, if you are the squirrels that rely on the nuts from those trees, or the birds that put a nest in the trees, or all of the thousands of species of life that lives in the bark, on the bark, on the leaves, in the root system of the tree — to those, the value is infinite.”

Over the past few decades, Elon has expanded its campus significantly, adding more than 100 buildings in less than 20 years. With each new building on campus, more trees are being cut down.

According to Tom Flood, assistant director of Physical Plant and director of landscaping and grounds, the university recognizes this issue and continuously adds more trees during construction.

“Construction inevitably has to remove some trees sometimes,” Flood said. “But we are very cognizant and careful to go back with a large number of trees in the planting.”

Flood offered many examples, saying that before beginning the construction of the Global Neighborhood, Physical Plant had to remove around 100 trees. But after construction was completed, 313 trees were added in the new neighborhood.

Similarly, construction for Schar Hall caused about 10 large oak trees to be cut down, but through landscaping, Physical Plant added 54 new trees — 28 percent of which were oak trees.

Though the plans have not yet been finalized, Flood said the construction team plans to add more trees in and around the new parking lot near the McMichael Building.

“We will probably have, I imagine, in the range of 40 to 45 smaller, new trees go back in on that project,” Flood said. “So we will line the street on Haggard Avenue with them and also adjacent to the elementary school. There’s a bioretention base for storm water management on the north side of the parking lot that will have trees in it and around it. And then in the landscape buffer between the parking lot and the McMichael Science Building, there will be more trees in there as well.”

Flood also added that more trees will be planted around Sankey Hall. Regardless of upcoming construction, he said that Elon is still committed to making sure that trees remain across campus.

“It’s part of the ethic of who we are — Elon means ‘oak,’ our logo is an oak leaf, and so that sets the standard for what our campus will be,” Flood said. “We have always envisioned and designed this campus as sort of a ‘southern garden,’ if you will, set in a grove of oaks — so that still guides the landscape architecture that we do today in all of our projects.”