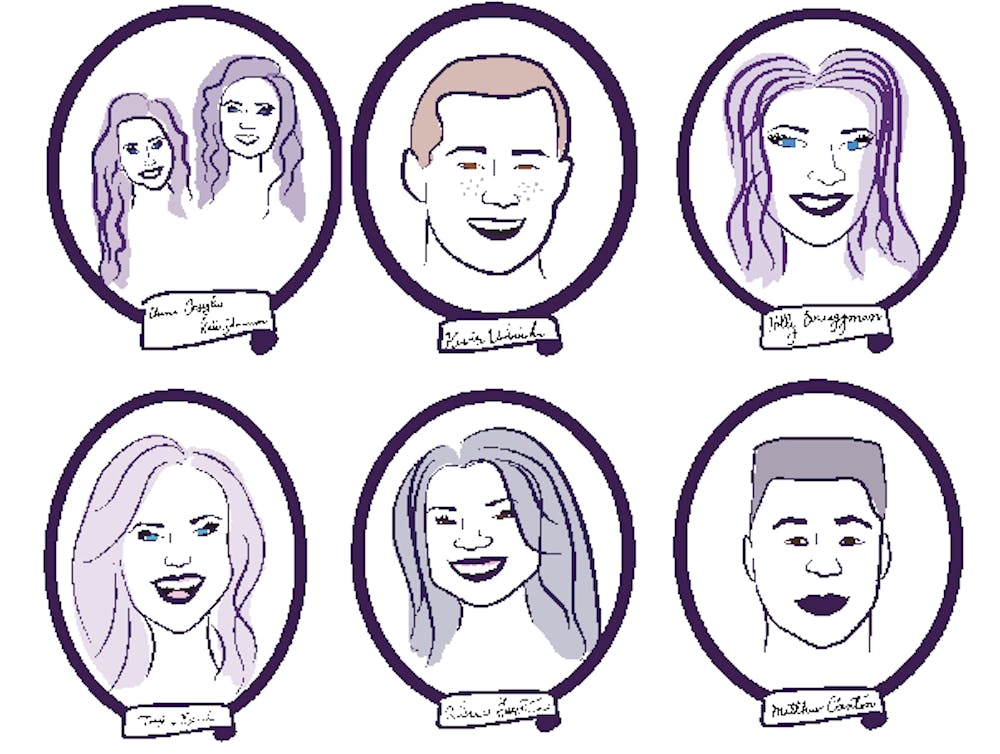 Sophomore Anna Corsiglia almost didn’t go to her a cappella auditions freshman year because of her nerves. But today, she is arranging a version of “Greedy” by Ariana Grande as music director for the Shirley Tempos, an all-female a cappella group.

“Over the summer I arranged a song by Panic! At The Disco to dip my toes in the water and see how it goes,” Corsiglia said. “But this is my first one for real — for actual voices to sing into microphones on a stage.”

Leading up to the weeks before a cappella concert season, music directors for each group are busy scheduling rehearsals, helping members learn songs and arranging last minute music for the group.

Most of the job involves leading rehearsals and guiding the group in a musical direction.

“I have a lot of non-a cappella music experience, which is really important for the job, to know what you’re talking about from a music standpoint,” said senior Adria Gunter, music director for Twisted Measure, a co-ed a cappella group. “I wanted to kind of push the group in a different direction and kind of try it out, and I’ve loved it ever since.”

For Corsiglia, watching her co-music director junior Katie Shannon and having her own ideas about the direction Shirley Tempos was going, prompted her to apply for the role.

“Having my own thoughts as a group member like, ‘What if we focused on this?’ or, ‘I feel like we need to work on this dynamic,’ or, ‘This moment could be way more intense if we focus on it’ led me to want to get my input in exec,” she said.

Though any member can arrange a song, music directors often take the lead.

Senior Holly Brueggman, music director for the Sweet Signatures, an all-female a cappella group, has arranged around 10 songs, since her freshman year. Her first arrangement of “I Can’t Help Falling in Love” took her much longer than expected, but now she can arrange a song in about a week.

Each arranger has a different process, but most begin the same way: listen, listen and listen.

According to junior Kevin Wehrhahn, music director for Smooth Progressions, an all-male a cappella group, after listening to the original, he will make sure the basics are covered before playing with effects or “big moments.” For example, with “So High” by John Legend, Wehrhahn is adding in mash-ups from other songs to give it a unique sound.

Brueggman also said it’s easier to alter a more popular song because the audience will recognize they’re doing something interesting to it.

“If it’s a song people don’t really know, you don’t want to mess with it too much because less people will recognize it off the bat anyway, much less recognize you’re doing something cool with it,” she said.

In addition to having “plunky stuff” added to the song, Corsiglia also makes sure to add sustained notes for each part, so the arrangement doesn’t have an empty feeling.

The amount of freedom depends on the song as well.

Hagood has arranged “Sandcastles” by Beyonce and “Hard Love” by NeedtoBreathe. But because “Sandcastles” was more basic, she had more creative ability to add in parts to make it more compelling.

“It was interesting to go from that artistic, do-what-I-want ‘Sandcastles,’ to being very structured and having a clear repetitiveness to ‘Hard Love,’” Hagood said.

To arrange each song, the a cappella members rely on software such as Noteflight and MuseScore, which allow them to break up the song into different sections as well as set up the score.

But it’s still a work in progress.

“I kind of arrange in chunks of time,” Gunter said. “I never arrange anything in one sitting. It’s more of when I’m feeling inspired in a way. I can dedicate from 30 minutes to three hours in those chunks.”

“It’s one of the songs I arranged super quick before our fall concert and I wasn’t expecting it to turn into the fun jam it is now,” she said. “Each section has so much fun singing it.”

Though it can be difficult to arrange music as well as run two to three rehearsals each week, seeing the end result is rewarding to each music director.

In addition to getting ready for the concert, Wehrhahn wants every member to improve in some way as a singer and musician.

“Everyone says I’m kind of like a dad, which is completely true,” Wehrhahn said. “I kind of enjoy that aspect of being able to take care of everybody and make sure everyone has what they need. Be that person that makes sure everyone gets from point ‘A’ to point ‘B’ and grows in the process.”

This is especially true for when a song finally clicks for the group.

“It’s been super interesting seeing them from day one when the sounds are all over the place, and we don’t mesh as a group, and it’s your job to try and mold that,” Brueggman said.