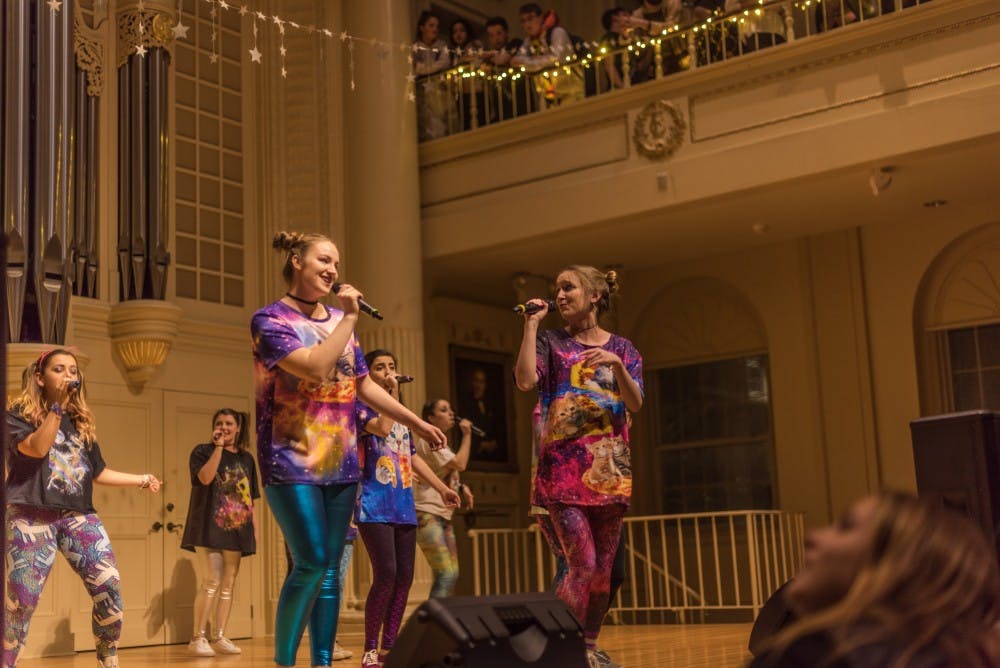 Despite the smaller than usual crowd, all of the a cappella groups cheered each other on and spent the night singing their hearts out.

“I am really just excited for the energy in Whitley during Acappalooza,” she said. “I think a lot of people would agree that it is different than just a normal a cappella concert because people are really supportive of each other.”

Whether it was supportive shouts for space cat costumes worn by the Shirley Tempos, an all-female a cappella group, or the voices of those singing along, the balcony of Whitley was crowded with other a cappella members cheering each other on.

Harn said the energy and involvement of the audience has always been her favorite part of the event. For example, at Acappalooza two years ago, those in the front row painted their chests to spell “SIGS” as a way to support Sweet Signatures.

Sophomore Jess Pusch, a Sweet Signatures member, said she felt really good about the event, regardless of the audience size.

“The performances by all of the groups were incredible, and I think that everyone that took part really enjoyed it,” Pusch said. “Sweet Signatures hosts Acappalooza with the intent of it being an exciting concert that lets all of the groups show off all the hard work and effort that is put into their pieces.”

There was a visible energy around Whitley after the visiting groups had the crowd cheering with their performances. To help out the visiting a cappella groups, Harn said she collected six air mattresses for some people to stay in her apartment.

“It’s a great crowd, and the other groups are always really supportive of each other, so it’s always a good time,” he said.

For Harn and senior Brooke Greenberg, vice president of Sweet Signatures, it was a bittersweet night.

Harn said music has been a big part of her life, and Saturday night was a sad reminder that her music career at Elon is coming to an end.

“I get to spend six-plus hours a week with people I call my best friends doing what we are passionate about,” Harn said. “I will definitely miss that when I am working nine-to-five next year.”

Greenberg said that for her last Acappalooza, she looked forward to the theme, the visiting groups and the glitter.

“A lot of other groups have other concerts like this now where a lot of groups perform, but we were the original ones to start it,” Greenberg said. “It is really cool to have people know about this event and come every year.”

Despite the stress of putting the event together, Greenberg was glad to be a part of it for her last semester.

“We had a great time and heard great feedback from the audience after the show,” she said. “I’m really happy with how everything went.”

Audience member sophomore Sara Smith said she has been coming to this show every year, and this was the best show she had seen so far.

“You could tell that the groups were having fun,” she said. “I can’t wait for the event next year.”