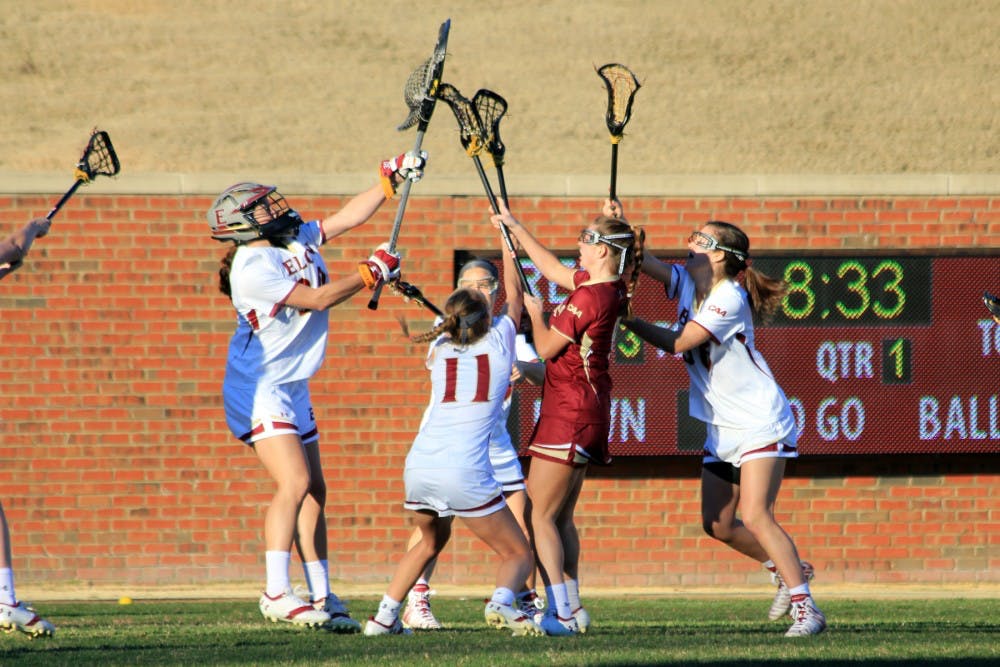 A softball careened toward her waiting lacrosse stick, which acted as a catchers’ mitt — going wide — and after a quick lunge and miss, the ball smacked the plastic frame and spun off sideways. Luckily for Ramirez and the pitcher, her sister Amanda, it missed the house.

Rachel Ramirez has always identified as an athlete. Blame it on genetics, routine or passion, Ramirez can’t imagine who she would be without sports.

“It’s just our life,” said Ramirez, senior goalie for the Elon University women’s lacrosse team. “We’ve been doing it forever. My mom played softball, and my dad was a football player and a wrestler. It’s a lot, but it’s my family dynamic. It’s how we work, and it’s what we do. It’s part of who I am.”

And Ramirez has continued that commitment to athletics as Elon’s ever-present force in goal, playing all but 47 minutes and 27 seconds of the fourth-year program’s 54 matches in net.

Growing up as the oldest of three — alongside her sister Amanda (now a sophomore pitcher for the women’s softball team at Concordia College) and brother Steven (now a freshman midfielder for the State University of New York at Albany men’s lacrosse team) — Ramirez played three school and two travel sports. By her senior year at Lindenhurst Senior High School on Long Island, New York, she was competitive at the college level in volleyball and lacrosse. Despite efforts to continue both, she was eventually forced to make a choice.

“When it came down to it, lacrosse is my love, and I wanted to come to Elon,” Ramirez said.

Ramirez was one of the first players recruited for Elon’s women’s lacrosse team. Head coach Josh Hexter arrived to his new position while the search for athletes was in progress.

“When I got the job, finding a goalie was the first priority, and luckily she was still around,” Hexter said. “Rachel was a Division I volleyball prospect and hadn’t made a decision yet. We got lucky, to be totally honest with you.”

The young program has evolved under Hexter, but Ramirez has continued to be Elon’s strength in the back. She currently ranks eighth in the country in saves, with 33, and 15th nationally in save percentage, at .579. In Elon’s matchup against the then-13th ranked University of Virginia, the Cavaliers took 16 shots on goal and Ramirez saved six of them, helping Elon to an 11-10 win.

Senior defenders Olivia Fernandez and Bridget Graef have worked with Ramirez to guard the cage since the beginning of the program, and both have lived with her over the course of their four years together.

“She’s literally like an eighth defender,” Fernandez said. “Half the time, she’s not even in the goal, and even if she is out of the goal and someone shoots, she’s somehow right there and makes a stop.”

Most college goalies play more conservatively, but Ramirez stands out from the competition by playing with an aggressive style. Graef can always trust Ramirez to execute a big play, whether it’s an interception of a breakaway or abandoning the goal for a ground ball.

“She’ll make her biggest, most crazy saves when it’s one person going down the field and there’s not a defender on her,” Graef said. “It’s just her, and she’ll just start moving all crazy.”

Push her lacrosse IQ and quick feet aside, and Ramirez is also a natural leader to the underclassmen.

“Her criticism is very constructive,” Fernandez said. “She’ll instruct on how to do something better, and then … she’ll add a compliment to it. So it’s the good, the bad, the good.”

Mentorship is as natural to Ramirez as clearing the ball. She pays particular attention to the up-and-coming goalies, junior Tori Cipollone and freshman Cassidy Nozemack, who will fill Ramirez’s position in the 2018 season and beyond.

“We play for each other,” Ramirez said. “We’ve established this trust and this friendship throughout four years. We all know how we play, what we do and how to communicate with each other. They’re mostly the reason I come out and play. I don’t play for me. I play for them.”

While communication between all players is key, Ramirez is clearly a standout.

“Even though it is a team effort, she has saved us,” Fernandez said. “In more than one situation, we would have lost more games than not without her. She really is definitely one of the top three goalies in the nation, I would say.”

“Rachel Ramirez might be the best goalie in the country,” Hexter said. “She’s just not getting that recognition.”

Her academic accomplishments are equally important to her as seeing success as a goalie.

Ramirez is a management major with a concentration in human resources and a minor in human services. Hexter credits the same dedication she has on the field as the key to her success in the classroom.

“What she does is she works so hard, every day,” Hexter said. “She has worked really hard in the classroom. That’s probably been for me the most impressive part of Rachel. It’s how much she has improved, in everything in that regard, as far as the academics goes.”

Regardless, Hexter doesn’t worry about how much attention the players attract. He prioritizes community building and focusing on collective improvement.

“Our culture is becoming such that we don’t have any fear,” Hexter said. “We just play. We just really try hard to do the little things, and support each other, and love each other, and if we can do all that stuff, then we typically play pretty well.”

“Pretty well” might be an understatement. The team has four wins under its belt, and is receiving votes in both prominent national polls, just a few votes outside the Top-20. Elon could jet up into the rankings for the first time in program history if the Phoenix can defeat 11th-ranked University of Notre Dame on Thursday. But no matter who she’s facing in goal, Ramirez is happy with the way the season is going.

While unsure of her post-season plans, she hopes her final season is her best yet.

On a blustery February afternoon, between the wind chill and the sun barely peaking over Rhodes Stadium, it’s possible to see the shivers from the group of maroon-, black- and gray-pennied players waiting on the sidelines and watching from the front risers. Individual calls are impossible to distinguish, except the occasional panted, “Got ball!” and, “Recover!” which sound up from the 25-yard line where Hexter is leading an offensive drill. Hardly any of the shots make it past the circle.

For sure, it’s a far cry from catching softballs in the backyard. But one thing is clear — Ramirez no longer has to worry about hitting the house.