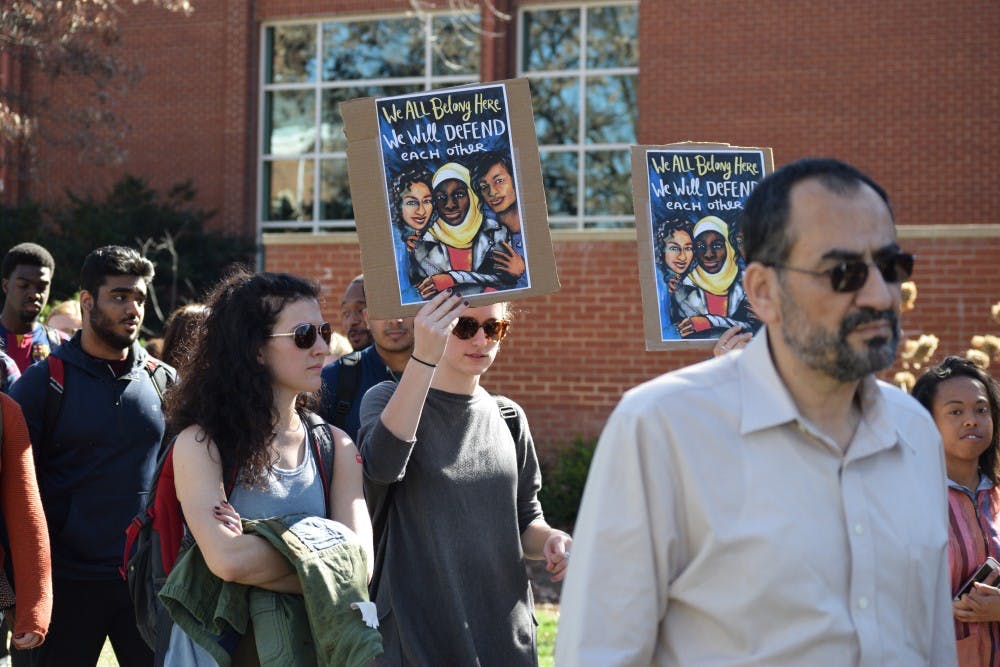 
Students and faculty gathered together for a solidarity march at Elon University Feb. 6. They walked from Speakers’ Corner to the Global Neighborhood in support of Elon’s international population.

Elon University presents itself as an inclusive campus protective of all of its students.

After President Trump signed an executive order suspending all refugee admission for 120 days and banning travel from seven Muslim-majority countries for 90 days, Elon President Leo Lambert was quick to issue a statement. He criticized the order, saying it “has spurred deep concerns for many members of the Elon community.”

Though talk about the executive order has focused on the implications it would have for those on student visas, it also poses significant challenges for university administrations.

Elon must remain in compliance with federal laws requiring it to disclose immigration statuses while simultaneously working to provide students with a sense of safety and security. It must also prepare for the uncertainties that lie ahead. This clashing of demands has put Elon in a vulnerable position.

Elon will comply with federal law

As Elon seeks to reassure its students that it will keep them safe, it also recognizes the legal responsibilities it must follow. These demands do not conflict with one another, according to Woody Pelton, dean of global education.

“We need to report that the students that we invite to be a student are in fact a student, and they all are. … Not only are we required to do it by law, but we want to do it,” Pelton said.

Pelton says students do not need to be worried about ongoing reporting.

DSOs report this information, along with other student demographic and performance variables, into the Student and Exchange Visitor Information System (SEVIS).

The Department of Homeland Security, specifically the U.S. Immigration and Customs Enforcement (ICE), uses this information to track foreign students in the United States.

Elon’s DSO, Francois Masuka, declined to be interviewed. Lambert, who was unavailable to be interviewed, wrote in his initial statement that the university does not release “any confidential data about its students, faculty, and staff, including immigration status, unless required by law.”

Pelton confirmed the university will continue to adhere to federal laws and update SEVIS. But Elon’s peer institutions have been more openly antagonistic toward Trump’s immigration ban.

Nondisclosure not an option

In a statement, Duke University President Richard Brodhead wrote that Duke would not share confidential student records with law enforcement agencies unless the university were subpoenaed.

The university later clarified that it would still comply with SEVIS.

If universities violate federal law by not reporting immigration statuses, which Duke had initially suggested as a possibility, they run the risk of losing their SEVP certification. A loss of certification could lead to ineligibility to enroll foreign students.

Elon is required to disclose student immigration statuses to the Department of Homeland Security.

“Schools that fail to comply with these requirements may be deemed ineligible to enroll foreign students or their existing certification to enroll non-immigrant F or M visa students may be withdrawn, as appropriate,” said an ICE spokesperson.

Pelton said students should not worry about their immigration information being in the government’s hands.

“There is nothing students need to fear about that ongoing reporting,” Pelton said. “That’s been happening all along. Nothing new.”

Suad Ibrahim, a senior from Kuwait, and Kahlil Osman, a freshman with dual U.S.-Sudanese citizenship, said they trust that Elon is making the right decision in disclosing records.

Ibrahim and Osman still fear Elon cannot protect them from some of the consequences of Trump’s executive order.

Though Elon has just one student from one of the seven banned countries, the ban’s impact extends much further.

“There are five people that I know that it’s going to have a direct impact on — either the student or faculty person themselves or the family,” Pelton said. “Plans are changing probably because of this.”

Ibrahim is expected to graduate this spring but will not be able to have her grandmother in attendance because she is from Sudan — one of the seven countries banned from entering the United States.

“I haven’t seen my grandma in two or three years,” Ibrahim said.

Osman hoped to have his father visit Elon in the spring, but those plans have come to a sudden halt since he only has Sudanese citizenship.

The immigration ban is temporary, and its constitutionality has been questioned by the court system. On Friday, a Seattle federal judge granted a temporary restraining order blocking Trump’s ban on seven countries.

The White House responded later that night with a statement calling the judge’s ruling “outrageous” and stating that the order is intended to keep the United States safe.

Trump took to social media the next morning, tweeting “the opinion of this so-called judge, which essentially takes law-enforcement away from our country, is ridiculous and will be overturned!”

The opinion of this so-called judge, which essentially takes law-enforcement away from our country, is ridiculous and will be overturned!

The Department of Homeland Security released a statement Saturday announcing it had suspended implementation of the travel ban.

Ever-changing news is creating confusion among Elon’s international population, leaving universities with the task of supporting them in an uncertain time.

Kristen Aquilino, assistant director for Global Student Engagement, sent an email to members of Elon’s international community on Jan. 30 expressing the university’s commitment to protecting their safety and well-being.

In the email, she said she recognizes “there are many questions and a great deal of anxiety,” but reassured them that they are “legally authorized to work or study in the U.S.” She also announced there would be a meeting for people to ask questions and voice their concerns regarding the executive order.

"I don’t think there’s a reason for any of our students to feel threatened about their ability to continue as a student at Elon."

Pelton said he is unclear what Trump’s actions will look like three months from now. The university is essentially in the same position as many of its students: confused, waiting to see what happens and searching for guidance.

As Elon looks to the future, it takes comfort in knowing the past hurdles it overcame.

9/11 rattled the U.S. population, shaking many people’s sense of safety and security.

Out of the Sept. 11 attacks, government agencies developed an interest in better understanding foreign students on college campuses. Pelton recalls an instance where they physically came to Elon’s campus.

Pelton doesn’t foresee a similar situation occurring at Elon in the near future.

Despite rumors, Elon is not going to become a sanctuary campus. By definition, part of being a sanctuary campus is not disclosing immigration statuses of students. Though Elon has sought to support and reassure its international community, it has also said it will remain in compliance with existing laws.

The university administration itself, along with specific departments, has consistently expressed its commitment to keeping students safe. For the time being, legal and social responsibilities do not appear to be clashing with each other.

The larger implications of Trump’s executive actions are what appear to be causing the greatest concern. Lambert has signed a letter with 597 other college presidents advocating Homeland Security to craft policies that keep the nation safe from harm while also welcoming potential international students to the United States.

Pelton worries the order could lower Elon’s ability to recruit international students and faculty members. He also fears the foreign talent pool will have a more negative perception of the country.

But at a time when the country is deeply divided politically and ideologically, Pelton believes there is a window of opportunity where values can meet in the middle.

“I think you can be fiercely patriotic — as I believe I am — but do that through a global lens,” Pelton said. “That’s what we need to continue to promote.”

Pelton fears Trump's immigration ban will have a "chilling effect" on ability to recruit international students. He hopes people can come together to support strong national security and global engagement.