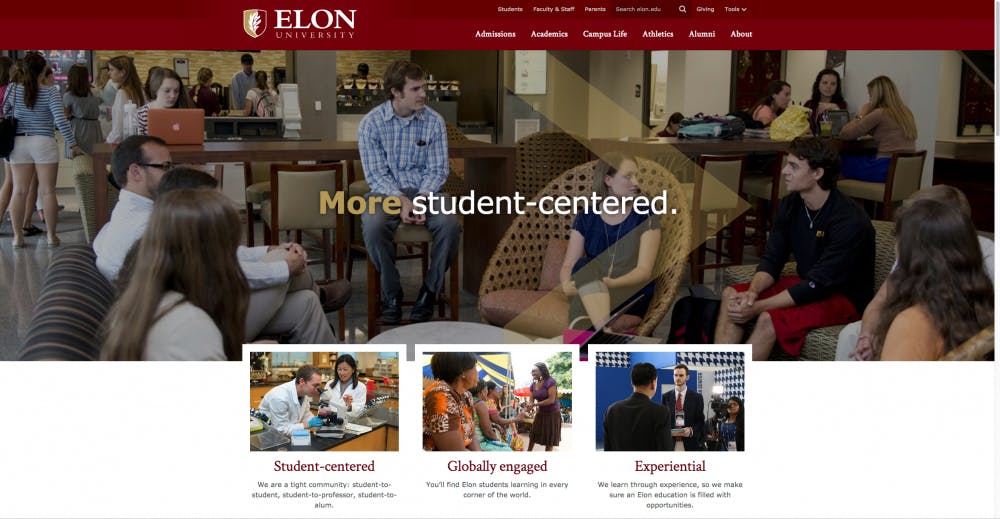 This article is the first installment in a three part series: Examining Elon's Social Climate.

See the second part about campus resources here and the third part about inclusivity here.

Smiling faces of groups of people in coffee shops greet new and prospective students on Elon University’s website, printed brochures and admissions materials. These are the images the school projects to its incoming class, and the seemingly perfect pictures attract many students to Elon — where the campus itself takes over the marketing campaign.

“I visited the campus in high school, and it was just so pretty I fell in love and wanted to apply,” said freshman Heather Pastore.

Elon markets itself as a student-centered, globally engaged, ambitious and academically rigorous private institution. With endless photos of immaculate brick buildings and pristine green lawns, the school of nearly 7,000 combined undergraduate and graduate students currently represents 49 states and 50 nations. Its 78 percent four-year graduation rate and esteemed study abroad programs are ranked among the best in the nation.

But once visitors get past the marketing phase and onto campus as enrolled students, they have to see if their expectations live up to reality.

Elon said it is aware of the way it works to portray itself to incoming students.

“In regard to recruiting students, we strive to provide fair and accurate information about Elon’s academic and student life programs so that they can make the college choice that best suits their educational goals,” said Dan Anderson, vice president of university communications.

Though the university wants to assist students during their transition, there are some limitations as to what it will say.

Jon Dooley, assistant vice president for student life and former co-chair of the Presidential Task Force on Social Climate and Out-of-Class Engagement, said it would be unrealistic to expect the university to state all of its problems and portray itself in a negative light.

“‘Here’s all the ways that you may find yourself disconnected,’” Dooley said. “Institutions just don’t do that, right? I think that the admissions materials and the students who are giving tours and talking at orientation are talking about their experience and are talking about the things that make this place great.”

Hints to those potential feelings of disconnection make their way into tours and admissions materials, as Pastore found out after she went on a tour.

“On the tour, they said Greek life was a big part of the school,” Pastore said. “Now that I’m here, I think that it really is because everyone is always wearing their Greek letters or has their letters on their laptops. It can kind of be intimidating because you feel like you have to join one. I mean, I want to anyways, but I think a lot of girls feel a lot of pressure to join one because of that.”

Jenny Fukunaga is a senior tour guide at Elon. Guides have sometimes been criticized for downplaying the prevalence of Greek organizations on campus, but as an affiliated member herself, Fukunaga wants to be honest in sharing her experiences. She feels a realistic portrayal of campus best serves the university and its students.

It’s not just involvement in Greek organizations that worry incoming students. Sophomore Ryan Wells identifies as a gay male and said he was anxious about coming to a Southern school that initially seemed homogeneous.

“Coming in over the summer, I was super nervous with House Bill 2 being passed,” Wells said, referring to a law passed by the North Carolina legislature requiring people to use the bathroom of the gender on their birth certificate.

“I have a boyfriend, so I wasn’t sure how North Carolinians would respond in general to seeing two gay people together,” he said.

Wells was then comforted by an email from Elon President Leo Lambert reaffirming the university’s commitment to protecting LGBTQIA rights.

“To me, coming in here, they really showed their support for the LGBT community and all communities in general,” he said.

Wells is hoping to get more involved with Spectrum, Elon’s queer-straight alliance, and SPARKS, Elon’s student health organization. Though organizations will play an important role in his future, it is the friends he has met in his hall that have been most influential in Wells’ transition to college.

Dooley said the biggest priority for the university is to encourage people to be open about their experiences and offer advice to help those who could be struggling.

“Those stories are sometimes not told, and so, one of our responsibilities then becomes during that orientation process after you’ve made the decision to come, to be able to be as clear as we can about what you may expect when you come here and what your experience may be.”

“Those stories are sometimes not told, and so, one of our responsibilities then becomes during that orientation process after you’ve made the decision to come, to be able to be as clear as we can about what you may expect when you come here and what your experience may be.”

In fall 2015, Elon assembled a 29-member task force to examine the campus social climate and out-of-class engagement. Dooley served as the group’s co-chair and helped compile a comprehensive report.

According to the university’s website, the task force’s goal was to “examine the student experience and recommend ways for all students to be fully connected to the university’s academic, intellectual, and social opportunities in a manner that is healthy, engaging and meaningful.”

The task force administered a survey to poll students, faculty and staff on their satisfaction with different aspects of Elon’s social climate. The survey also encouraged people to make recommendations about how to enhance the campus environment.

“There was certainly a pretty strong theme of some of the kinds of messages the institution sends about what your experience is going to be and what that will look like and some students feeling like they had a different impression when they arrived of what might happen than what happened in their actual experience,” Dooley said.

Dooley said the survey also revealed a strong desire among current students to have access to the types of meaningful, engaging and inclusive experiences the university promoted to them.

Sophomore Kenneth Brown is someone who has chosen to take full advantage of these experiences. As a highly involved student in the Odyssey Scholar program, he was aware of the difference between himself and the majority of Elon students. He came from a lower socioeconomic background than the majority of the student body. Knowing what to expect when he arrived, the transition still proved to be a challenge.

“Starting out, it can be difficult,” Brown said. “You know, first year, sophomore year, you’re trying to find out what you like, trying to find out who you are, and sometimes you can be trapped inside of these boxes that not only just Elon, but also other students, place around you mentally and unknowingly.”

By being a leader on campus as class president, Brown has tried to break out of the box people might have tried to place him into as a black student at a predominantly white, upper-middle class institution.

Wells took on the transition challenge, too, though he was apprehensive of coming to Elon as a gay student. He is proud to have begun developing a strong support system here.

“It’s not all just rich white kids that go to this school. There are other types of people that attend this school as well,” he said.