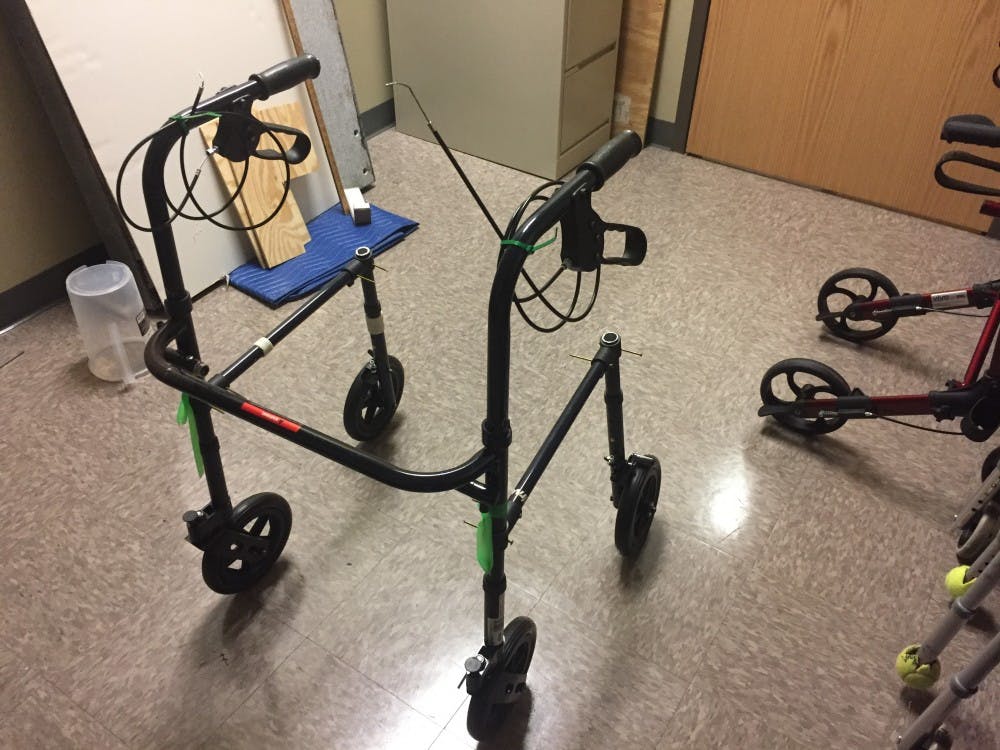 Watching her great aunt struggle to grip the breaks on her walker, Elon University senior Beth Lester decided to create a design that would enhance the accessibility of this mobility aid.

Lester witnessed her great aunt’s loss of mobility from multiple sclerosis and her feelings of frustration with being dependent on a faulty device. She described the response as painful to watch and even more painful for her great aunt to experience.

“My great aunt was too weak to grip the brakes, so the walker would roll too fast for her," Lester said. "I thought this was ridiculous. What’s the point of having a walker then?”

Her great aunt’s battle with the walker introduced Lester to the inconsistency between the current design and its purpose of assisting the user. Taking matters into her own hands, Lester decided to create a more appealing and manageable walker prototype with improved technology and a better appearance.

Her new invention has sensors that help correct the user’s position and that apply automatic breaking. With an emphasis on producing a more user-friendly design, she added a seat to the walker and made it easier to fold up and transport.

Currently in the design process of her research, Lester is putting the finishing touches on her walker in a laboratory in the McMichael Science Center.

“Design is a process of trial and error, and sometimes, there are more errors than I expected,” Lester said.

By learning what features enrich and detract from the device, Lester designed her “smart walker.” The smart technology includes sensors on the handles that beep and light up whenever the users lean too far forward or backward while using the walker. With this, the users’ posture will improve along with their strength and mobility. Other sensors measure incline, so when the user walks down a hill, friction will be applied to the wheels to slow down the device.

The idea to include smart technology arose while Lester worked with her mentor Scott Wolter, associate professor of engineering.

“She is very bright, and she is an independent worker, but she also works well with others. She is bright-eyed and interested in what is going on,” Wolter said.

With this advanced technology, Miller said he was impressed that Lester’s invention recognizes the older generation’s limitations and incorporates features that make these people feel more independent and capable.

“The assisted device makes life easier and better for the user, which is a positive contribution. People face physical challenges in society everyday, so anything we can do to push along and help people function better is something we should be thinking about,” Miller said.

Before applying the smart technology to her device, Lester asked 75 of the 673 residents at Twin Lakes Retirement Community in Burlington for their opinions on how walkers could improve. She collected data from her prototype’s intended population and integrated that into her design. With the residents’ advice, Lester sought to create a safer, more affordable and more aesthetically pleasing device to reduce the stigma associated with old age.

After introducing her new walker design to these residents, Charity Johansson, professor of physical therapy education and a board member of Twin Lakes, said the community members were ecstatic about the improvements.

“The residents enjoy having their expertise valued and sought out. They were really intrigued by the design, and I think some of them wanted to know when it was going to be in production,” Johansson said.

Lester was able to work with Twin Lakes and participate in undergraduate research after receiving the Lumen Prize her sophomore year. As one of 15 recipients of the prize, Lester received a $15,000 scholarship to initiate her project. This prize acknowledged her as an intelligent and creative scholar with a compelling research question and a meaningful contribution to her field of study.

As the chair of the Lumen Prize committee, Ann Cahill said Lester’s application stood out. Cahill described Lester as a determined worker who took an innovative approach at solving a problem that would positively influence those who tend to be overlooked in society.

“Her level of commitment and ownership over this project were palpable," Cahill said. "She was passionate about it. She had the motivation. She had the discipline to actually pull it off. That’s what we’re looking for in Lumen Scholars."

As an independent major in design and engineering, Lester is the first student from Elon’s engineering program to receive the Lumen Prize. Lester designs her own curriculum, which includes engineering and art courses. These classes have taught her the computer, design and technical skills needed to approach her research.

The summer before her senior year, Lester spent more than five hours a day constructing the walker while participating in the Summer Undergraduate Research Experience (SURE) at Elon. This program gave her $300 to help build the design.

In the future, Lester intends to apply for a patent for new technology and sell the design to walker companies. She has dedicated a majority of her college career to designing a product that will make technology accessible to an older generation and that will increase their wellbeing.

She said she does not regret the amount of time and effort spent and is thankful for all that she has learned during the process.

“The most important thing I learned while doing research is in order to get something done, I have to put myself out there. Other people are not going to do things for me," Lester said. "As the leader of the team, I have to be actively engaged. To have people work for me, I have to work with them.”