The Phoenix was scheduled to leave Philadelphia at 11:30 a.m., but after several delays and a diversion, the team finally arrived on campus at 9 p.m. 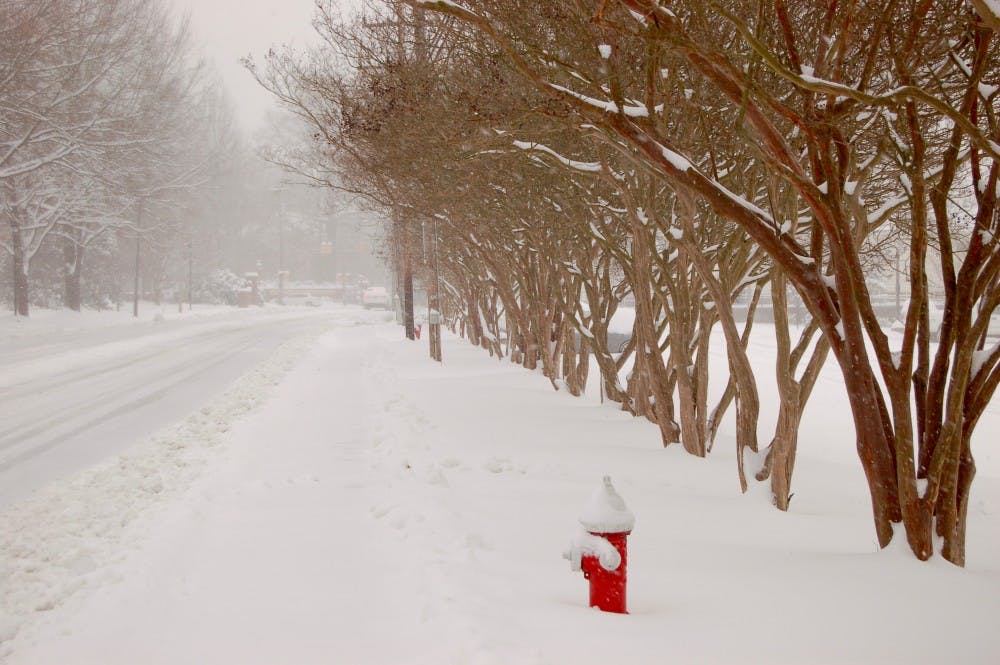 While most Elon University students were outside enjoying the eight inches of snow Saturday afternoon, the women's basketball team was stuck on a plane.

What should've been a simple, hour-long flight from Philadelphia to Raleigh-Durham International Airport turned into a 12-hour process from the time the team left its hotel to when it arrived back on campus, making the day between Colonial Athletic Association games just a tad more stressful than usual.

Elon left its Philadelphia hotel at 9 a.m. Saturday after beating Drexel University the night before. The team's flight with American Airlines was scheduled for 11:30 a.m.

The flight was initially delayed because the catering arrived late. The plan left the gate around noon, at which point the pilot said the wait for the de-icing process was about 90 minutes.

Then, a Frontier plane was disabled on one of the de-icing pads, so the team's plane had to swerve around it.

They took off around 1:55 p.m. and hit loads of turbulence on the way up — some players said they waved their hands in the air as if they were on a roller coaster.

Around 2:45 p.m., the plane slowed down. The pilot made an announcement saying they were waiting for RDU to open its runway, and that they might be diverted to Greensboro or Charlotte.

Ultimately, they were diverted to Charlotte, where they landed around 3:30 p.m. They arrived at a gate, but the gate agents wouldn't let anyone off the plane because of increased crowds at the airport.

As they landed, RDU's runway opened.

The plane sat at the gate in Charlotte for two and a half hours.

"You have to keep it light," said Elon coach Charlotte Smith. "Every time they would announce something that was not going our way, we'd just laugh it off."

There, the pilots mentioned flying back to RDU. But there was a technical issue involving whether the flight was in American Airlines' system.

Per Department of Transportation regulations, if a plane is on the tarmac for more than three hours, they have to let passengers deplane. With about 10 minutes to spare, the plane received clearance and took off yet again, this time bound for RDU.

After a 30-minute flight there, the plane waited on the tarmac another hour and 15 minutes because of a disabled plane on a sheet of ice that couldn't move. The airport was full, so no other gates were available.

Finally, they pulled in at a gate when another plane left.

"We had fun talking to each other while sitting there waiting for the next call," said junior guard Shay Burnett.

Elon returned to campus around 9 p.m., more than 12 hours after leaving the hotel and about eight hours later than expected. The team still had practice, albeit a slightly different one than intended.

Still in street clothes, they walked through some defensive plans, watched film and left about 30 minutes later.

Ultimately, it paid off. On Sunday, Elon beat University of Delaware 69-42.