Report: Elon's socioeconomic divides among the highest in the nation 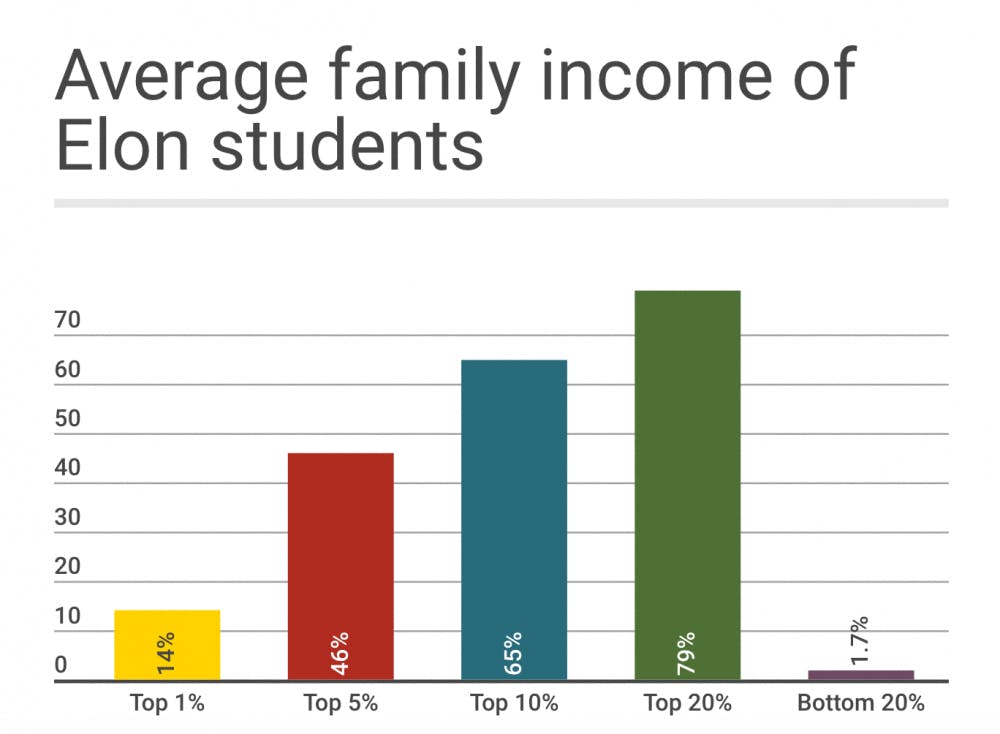 A new study from the Equality of Opportunity Project shows a major socioeconomic divide at Elon University.

The study also revealed Elon had one of the worst mobility index scores in the United States. The overall mobility index represents the likelihood a student moved up two or more income quintiles by the time they were about 35 years old.

Results were drawn based on millions of anonymous tax filings and tuition records for 30 million students born between 1980 and 1991.

The project gained national attention on Wednesday after the New York Times reported on it. For Elon students coming from financially disadvantaged upbringings, the findings came as little surprise.

Sophomore Kenneth Brown is an Odyssey Scholar at Elon and often recognizes the economic divides on campus. He constantly sees other students go off campus for meals and spend money excessively. As someone who does not have that ability, he becomes isolated from wealthier students.

“It reinforces the things that we already know,” Brown said. “The reason these numbers don’t surprise me is because I see students who don’t take the time to reach out to people who come from different backgrounds.”

As an Odyssey Scholar, Brown receives thousands of dollars in financial aid from the university. He is appreciative of the opportunities an Elon education has afforded him and hopes more people will have the ability to get a quality university education.

Carl McPherson, pre-doctoral research fellow for the Equality of Opportunity Project, said Elon could help bridge its socioeconomic divides by admitting more students from lower income backgrounds and helping them get into higher income brackets after they graduate.

The study sought to address the issue of socioeconomic divides in higher education. It did not focus on the root causes of the divides. Instead, it aimed to begin a conversation about the current socioeconomic climate on college campuses.

"The focus of our research is not why this happens, but what the landscape looks like,” McPherson said.

How Elon measures up

Though Wake Forest admitted fewer students of lower socioeconomic backgrounds than Elon, the lower income students it accepted fared better economically after college than those at Elon. UNCW scored better than Elon because it had a higher proportion of low income students.

Socioeconomic divides have only worsened at Elon over the last decade and a half. Data shows Elon is continuing to attract wealthier and wealthier students. The share of Elon students born between 1980 – 1991 from the top 20 percent, 10 percent and 1 percent has steadily increased, while the share of those from the bottom 60 percent has gradually declined.

Tackling this issue is no short-term task, but Elon is taking measures to solve some of its gaps in access.

The Board of Trustees recently approved its 2017–2018 budget. Though tuition increases by 3.46 percent next academic year, financial aid will go up by 7.7 percent.

Greg Zaiser, vice president of Admissions and Financial Planning, said much of the 7.7 percent increase will go to scholarships.

"For Presidential and Elon Engagement alone, the university is adding over 175 scholarships," Zaiser said in an email.

Though the numbers show Elon has a large socioeconomic divide, the university notes a small portion of its students are from the top 1 percent. Zaiser added that the results reflect Elon's modest endowment.

"Elon is not on the list by virtue of the top number (14 percent in the top 1% percent, which is much smaller percentage than the other top schools), but by virtue of the bottom number, with only 9% in the bottom 60% of the income bracket," he said. "This is a function of our modest endowment, which limits the ability to provide financial aid."

Zaiser also stressed the importance of putting the report into context and recognizing that the numbers may not reflect where Elon is today. In essence, some of the statistics in the report are not indicative of the university's growth over time, according to Zaiser.

"While it appears that Elon students do not do well on the 'mobility index' and the median graduate income, it’s important to point out that these data are for students born between 1980 and 1982. That means these were students who entered Elon between 1998 and 2000. Elon was a very different school then. Today’s Elon students have different earning potential or mobility opportunities."

Of the 2,137 colleges analyzed in the report, Elon ranked 2,118th in the mobility score. Zaiser said this figure was not indicative of Elon's current performance.

"Few schools have changed so radically as has Elon in the past two decades, so the mobility score might be valid for many schools," Zaiser said. "It is not for Elon."

Admissions and University Advancement officials responded to a request for comment but did not offer an official statement at the time of initial publication.