Phoenix gets out to fast start, cruises by Hofstra

Steven Santa Ana had 29 points, while Tyler Seibring had 22 and Dainan Swoope had 18. 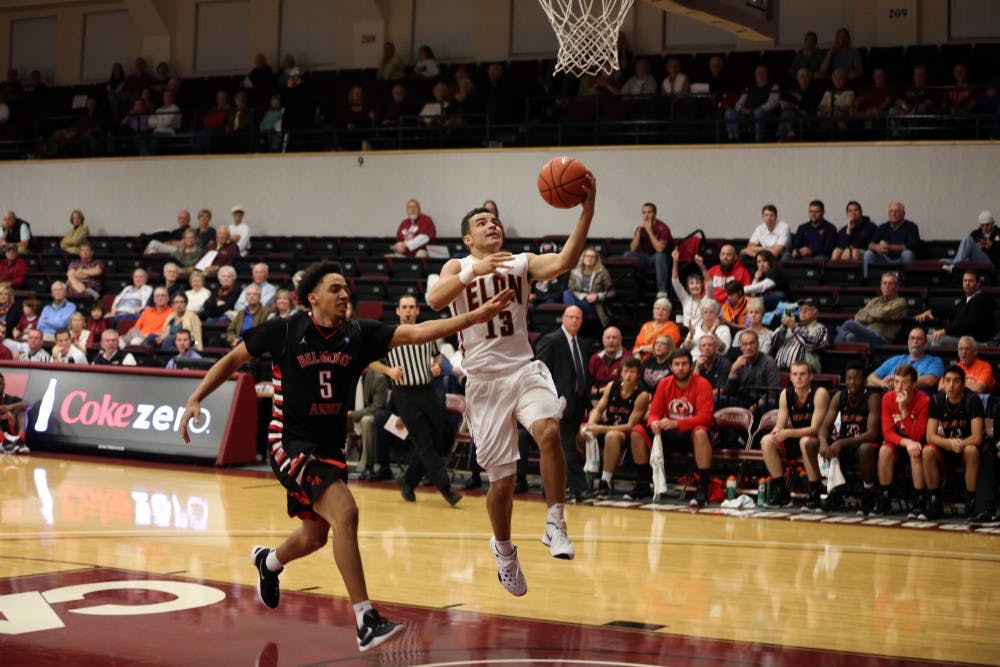 Elon guard Dainan Swoope goes up for a layup in a win over Belmont Abbey. (Andrew Feather/ELN)

It was clear early on that the Elon University men's basketball team was well rested.

The Phoenix delivered its best shooting performance of the season and its highest scoring output in three seasons in the Colonial Athletic Association (CAA) as it romped past Hofstra University 96-80 on Thursday night at Alumni Gym.

The victory comes after four days off for the Phoenix, which played four games in eight nights culminating with a Jan. 7 victory over Towson University.

"When we came into the huddle before tip-off, we said 'This is the game we're going to start off strong,'" Swoope said.

The lead was assembled by way of a flaming start for Elon, which, after missing its first two field goal attempts, made eight straight from the field to go up 21-11.

After the third of those, the Pride burned a timeout. But that didn't stop Santa Ana, who drove in and scored on two of the next three possessions.

"You talk about the moment where you know things are rolling," Seibring said. "When [Santa Ana] hit that third one in a row, I thought, 'Here we go again.'"

By halftime, Elon had constructed a 16-point advantage and was shooting more than 50 percent from the field.

"I loved the way we started," said Elon head coach Matt Matheny. "More so than just the technical start — offense or defense. It was the mindset. ...

"I thought we were fresh coming into tonight's game."

The shooting display — at times reminiscent of a 3-point shooting contest — carried into the second half. The Phoenix made its first seven shots coming out of halftime, including its first six 3s.

Swoope connected from 3, then Santa Ana, then Swoope again, before Seibring made a couple plays in the post to give Elon a 25-point lead.

Sure enough, it was Swoope again who drained a 3-pointer for a 71-45 lead. which would be the largest of the evening.

"Our offense was flowing pretty well," Seibring said. "We move the ball all the time, and sometimes the shots don't go in like that. This was a pretty good night in terms of that."

Hofstra, which lost its fourth straight CAA game, cut the deficit to single digits in the final minutes after a 3-pointer by senior guard Brian Bernardi, but would come no closer than seven.

"I like our confidence right now," Matheny said. "I think the confidence can survive not shooting the ball as well as we did tonight. I feel pretty good about that. The mindset is right. The confidence is right. I think we're getting better."

NOTES...: Swoope, Thompson and Santa Ana all left at various points during the game to tend to minor injuries. Swoope cut his lip open on a transition play, Thompson rolled his ankle and Santa Ana dealt with cramps. All returned, and Matheny said none were serious situations. ... Hofstra junior forward Rokas Gustys, who came into Thursday ranked second in the nation in rebounding, grabbed just four rebounds, a season low. He grappled with foul trouble all night. ... Elon moves to 10-8 overall and 2-3 in CAA play with a game at James Madison University scheduled for 4 p.m. Saturday. ...