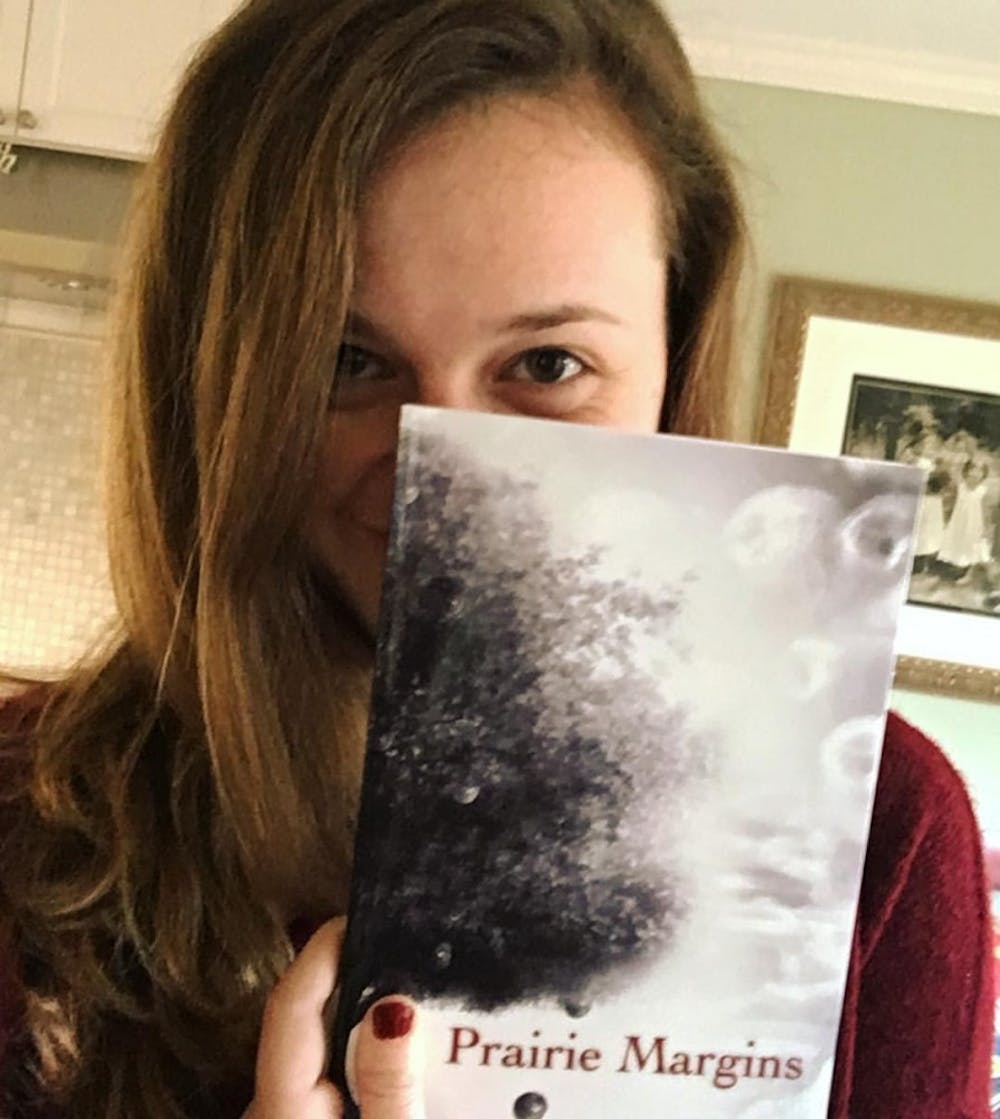 Maggie Miller's '16 nonfiction essay “Why I No Longer Bake Apple Pie” was published in the latest Prairie Margins. Photo courtesy of Maggie Miller '16

Beckah Porter ’16 was sitting in a coffee shop one May weekend in 2016. She had come there to write, a routine she’d formed since recently graduating from Elon University.

But that day, she didn’t get any writing done.

It was the day she got the email that her poem “Vignette” was going to be published in The Prairie Margins, Bowling Green State University’s undergraduate literary journal.

“I had to step outside, do a little dance. I was so excited,” Porter said. “But then, of course, I had that moment of freak-out, being like, ‘Oh my gosh. Other people are going to read my work. Oh no.’”

Hearts on their sleeves

But it was the first time it had been published outside of Elon, so all of a sudden, strangers had her words in front of them. And as much as she wanted to be published, that made her feel vulnerable.

“When you’re sharing your work with people, you’re sharing a little piece of yourself,” Porter said. “Even if it’s fictional, even if it’s a fairy tale, fantasy, something, it’s still a piece of you that’s in your mind that you’re writing and then sharing to an audience. It’s a little bit scary because you don’t know how they’re going to react to it.”Listen to Beckah Porter '16 read "Vignette":

Ultimately, Porter said the national stage for her work was more encouraging to her than anything else.

“It brought my confidence up a little bit just to have someone say, ‘Hey, you can actually do this. You can become a writer,’” she said. “It just gave me that confidence to keep going.”

And she did keep going.

Though Porter said she received her fair share of rejection emails, she also had nonfiction pieces published in the Rain Party Disaster Society and Susquehanna Review, both literary magazines with a national audience.

Maggie Miller’s ’16 first published piece — a nonfiction essay called “Why I No Longer Bake Apple Pie” — also found its home in Prairie Margins. Like Porter, Miller said she was nervous to think about her work being read beyond her fellow students at Elon. But she was more worried about someone a little closer to home.

“[‘Why I No Longer Bake Apple Pie’] is a creative nonfiction piece about some family drama that went on the summer after my freshman year between my family and my mom’s parents,” she said. “I hesitated to submit it because it is very personal, and it’s very explicit about the family tragedy that was going on.”

In the end, Miller said she found it therapeutic to write about such a dramatic time in her life. But she was confident in the result — so confident that she brought it into her senior seminar for her classmates to workshop.

“And after being encouraged by each of those audiences in succession, I feel like that gave me the final push to actually send it out and maybe say that maybe this is something that other people could enjoy reading as well, even if it is a little more vulnerable than I’m used to being with my writing.”

Listen to Maggie Miller '16 read "Why I No Longer Bake Apple Pie":

For Miller, it was worth it. She said she’s gotten emails about her essay from women at her church at home after Miller had given her mom a single print copy of Prairie Margins.

They’ve told her that they went through similar experiences with their own families, and they thanked her for writing about it.

Professor of English Cassie Kircher regularly teaches senior seminar for creative writing majors, so she tutors each batch of young writers as they march toward the graduation stage.

She said that guiding students in their journey to getting published is an important consideration in how she structures the class. She builds in scaffolded assignments that require students to compile lists of literary magazines they think would be good fits for their work.

While professional writers know the process for submitting to a literary journal well, young writers can be stumped by the complicated process. The terminology can be intimidating, as can the giant list of requirements provided for submissions.

Kircher understands how hard it is. Though her name has been in print for some time, she said she keeps sending out work—not just because she loves writing, but also because she wants to make sure she knows how the publishing scene is changing.

Even as a professor and professional writer, she can feel some of the stress and uncertainty of undergraduates who submit creative work beyond Elon’s brick walls.

“Sending work out is, in fact, work,” Kircher said. “It takes time and thoughtfulness. Getting rejected can be hard. I try to tell students how I deal with these little hurdles, and I hope I remember to tell them to celebrate their publications and successes.”

Miller remembers how tedious the process of submitting was. She said she sat in The Oak House with other students in her senior seminar, copy and pasting the same cover letters and purpose statements into emails and forms to send to different literary magazines.

“Each submission requires the story to have a different name, so I have the same story saved under like eight different titles,” she said.

Despite how annoying it was to go through the steps of submitting work, Miller and Porter agreed that making submission a part of their senior-level class set them on the right path.

Miller specifically recalled the list of literary journals she had to compile for her senior seminar class, co-taught by Associate Professors of English Drew Perry and Tita Ramirez. She said the accountability of that assignment gave her both encouragement and autonomy.

“Other than [the submission assignment], we were sort of on our own,” Miller said. “Which was kind of cool. Because then I had to go seek out a bunch of different literary magazines, and my classmates and I had to proofread each other’s little cover letter.”

That autonomy has followed both young alumnae past senior seminar. Neither Miller nor Porter is in a creative field at the moment, but after being published, they’re still working to find time to write, though it’s a difficult balance. But they agree it’s worth it.

“Your words are potentially affecting them, in a positive way or just in a way that just shifts their perspective, which I think is why words and texts mean so much.”