Trump to supporters at Fayetteville: ‘Reject the failed approaches of the past’ 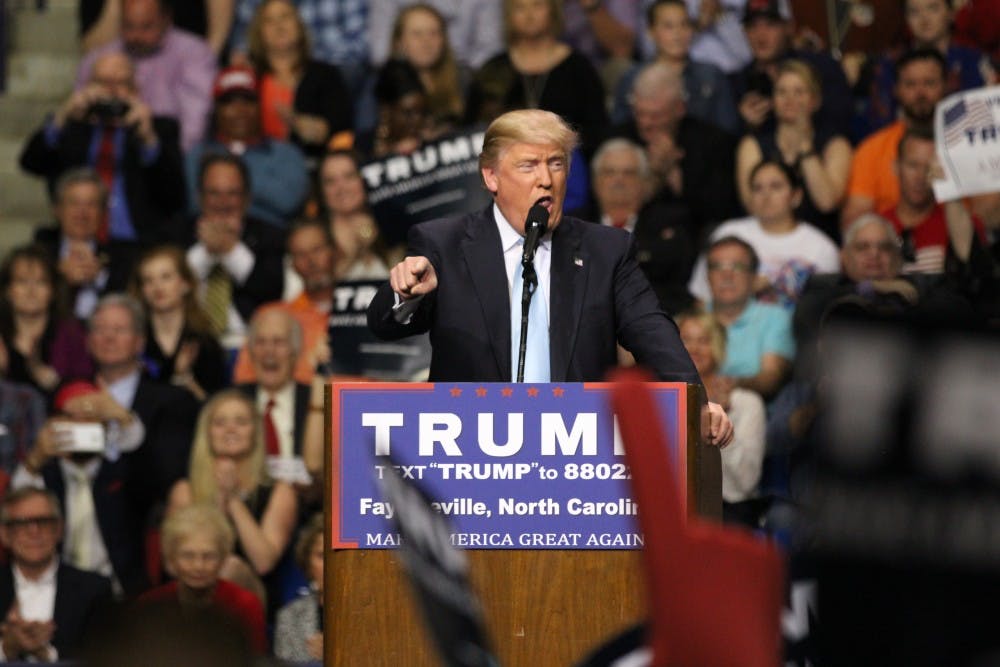 The Fayetteville rally marked his first trip to North Carolina since winning the election and the second stop on his tour of states he won in the general election that secured his presidential victory — dubbed the “USA Thank You Tour.”

Speaking to about 4,000 people at the Crown Coliseum, Trump thanked attendees for their continued support.

“You went out and pounded the pavement,” Trump said. “You organized your fellow citizens and propelled to victory a grassroots movement the likes of which nobody, nobody, has ever seen before.”

Though Trump talked about his victories in swing states like Ohio, North Carolina, Pennsylvania and Michigan, he spent much of his time highlighting his commitment to strengthening the economy and military.

"The military families in North Carolina are a national treasure, and it will be the duty of my administration to ensure that we protect those who protect us,” Trump said.

Mattis thanked Trump for the opportunity to serve, and Trump put pressure on Congress to approve his nomination.

“If he didn’t get that waiver, there’d be a lot of angry people. Such a popular choice.”

Drew Spaulding, 21, who is stationed at Fort Bragg, said he liked Trump’s picks for his cabinet so far, especially Mattis.

“I like what he’s doing with the military. I think he’s going to keep our troops safer,” Spaulding said.

Trump, a Republican real estate mogul and first-time candidate who was widely considered an underdog in the race, was active on the campaign trail in North Carolina. While Democratic candidate Hillary Clinton largely spoke to crowds in the state’s largest cities, Charlotte, Raleigh and Greensboro, Trump traveled throughout the state. In September, he even campaigned in Kenansville, N.C., a town 60 miles east of Fayetteville with fewer than 1,000 people. He visited Fayetteville two previous times, once in March and once in August.

North Carolina was considered a must-win battleground state for Trump. No Republican has won the presidency without North Carolina since Dwight Eisenhower in 1956. In the end, Trump won the state by 173,000 votes, more than 3.6 percent of votes cast in the race.

Robert Brake, a 56-year-old a mechanic raised in Fayetteville, made a 3 1/2 hour drive from Virginia to see Trump. He said Trump would be a champion for the working class and help lower taxes for the middle class.

Not all attendees were as enthusiastic about Trump, though. Pembroke resident Carson Mounce, 20, voted for Clinton but decided to come so he could see the next U.S. president.

“Honestly, I didn’t even vote for Mr. Trump,” Mounce said. “This is a once-in-a-lifetime experience to see a president.”

Similar to previous campaigns, Trump returned to theme of being an outsider able to shake up traditional politics.

“To accomplish our goals, we must reject the failed approaches of the past,” Trump said. “We must move past the tired, conventional thinking of Washington, D.C.”