"Food brings everyone to the table” 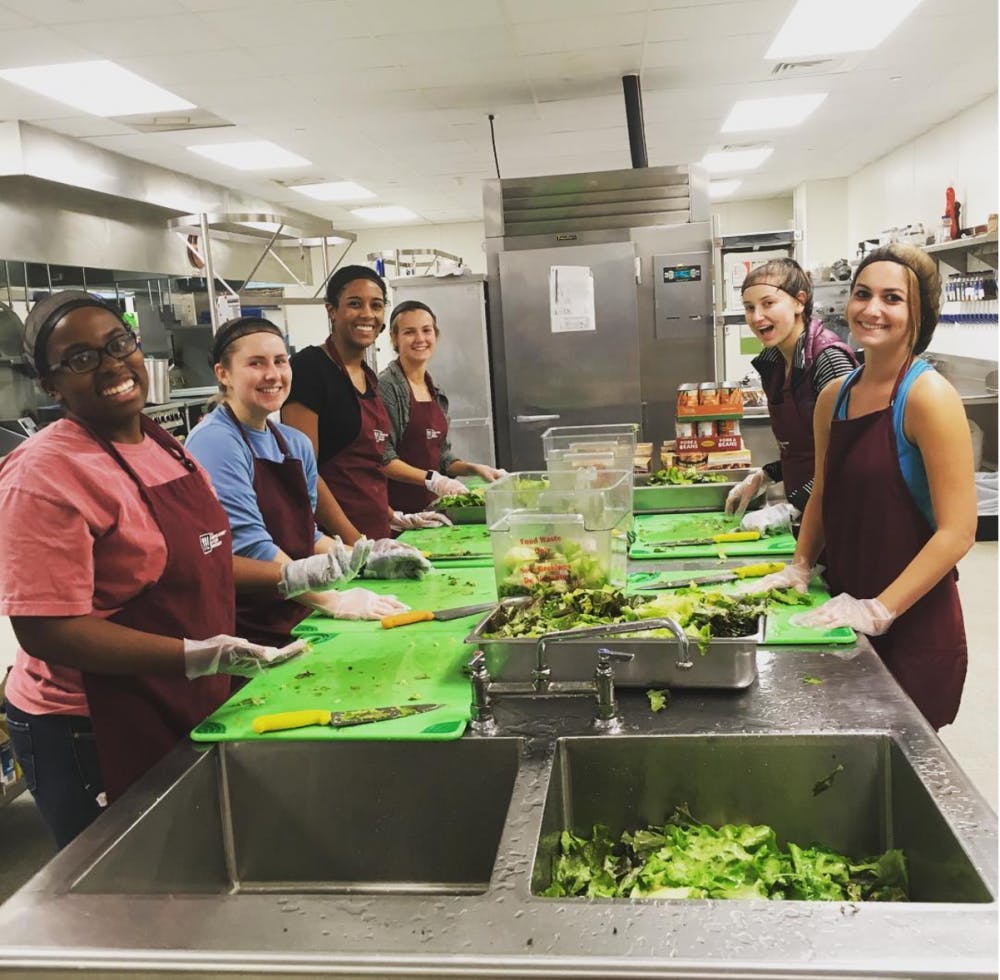 A small bumper sticker of a mason jar pinned on a bulletin board above the desk of Elon University alumna Felicia Cenca ’16, reads “First we eat, then we do everything.”

Cenca, the coordinator of Campus Kitchen at Elon University (CKEU), said she believes the quote by M.F.K. Fisher captures her commitment to addressing the issue of hunger in Alamance County.

“No matter who you are, where you’re from or what you believe — you have to eat,” Cenca said. “So, as a social issue, food brings everyone to the table.”

With selfless, community-based dedication as the key ingredient in their work, Cenca and other community members have been working across diverse platforms to address the issue of hunger in Alamance County.

From Monday to Sunday, from fall to spring, fighting hunger in Alamance County holds different meanings to the students at Campus Kitchen, the university’s student-driven hunger relief organization.

On some Sundays, it means food resourcing at Elon’s Loy Farm. Sometimes — such as in the case of a couple week ago — it involves harvesting more than 450 pounds of produce at Loy. On some Mondays, it means preparing the harvested produce in cooking shifts.

On some Tuesdays, it means delivering more than 150 nutritional meals to Allied Churches and 100 meals to two senior sites. On a monthly basis, the CKEU leadership team also conducts nutritional programming at the John Robert Kernodle Center. Throughout the week, Elon Dining also partners with Campus Kitchen by donating dried food and supporting their five-for-one canned food donation drive.

In between their weekly and monthly programming, students also plan campus-wide awareness initiatives including the annual Homelessness and Hunger Awareness week.

The task on each day of the week may change sometimes but the commitment stays the same: stop hunger — not tomorrow, but now.

“Hunger doesn’t just go away because it’s a problem based on larger social issues,” Cenca said. “So while we are trying to create a more just food system, we can’t just stop feeding people. Someone has got to do that work.”

For junior Amy Mullan — who has served as a Campus Kitchen student leader for almost two years — addressing the issue of hunger in the county is a matter of human rights.

“Good nutrition is a basic human right,” she said. “If people don’t receive enough healthy food at all times in their lives, they can experience a wide range of health issues and struggle to succeed academically and in their career, further continuing the poverty and hunger their family is experiencing.”

Mullan added that hunger rates in the community are much higher than the national average.

The United States Department of Agriculture defines food security as “access by all people at all times to enough food for an active, healthy life.” But according to research conducted by University of North Carolina at Chapel Hill School of Government, 18 percent of Alamance County did not have that privilege in 2013. In the same study, they found that 27.4 percent of children in the county live in food insecure homes.

“As college students, we have the privilege, access and education to address food insecurity in our community,” she said. “We grow more than enough food to feed everyone on this planet, yet so many go hungry.”

The same drive to serve the community beyond Elon fueled Cenca’s decision to stay in Elon after her graduation in 2016. The environmental science and philosophy double major has worked on Loy Farm since her junior year and attended the Carolina Farm Stewardship Association Conference that year, prompting her to know she wanted to work with food.

“I realized if I want to do work with food, this is the place I should be doing it,” Cenca said. “I want to take my commitment to the issue and give it back to the community that has given me so much.”

But Cenca added that because of the nature of the Campus Kitchen program, student volunteers are vital to its development. While some days, there is not enough food to involve a large number of students, she encouraged more students to reach out regarding ways to get involved.

“Our work is powered by student volunteers,” Cenca said. “They drive what we do.”

Beyond volunteers, religious groups have come together to fight hunger.

Shar Sayed, president of the Board of Trustees of the Burlington Masjid, fondly recalls the time a member of the community thanked him for his service initiative with, “I’m going to ask Jesus to pray for you.”

For Sayed, the statement was testament to the masjid’s goal of serving the greater community.

“I smiled for that because I knew it came from someone’s heart,” Sayed said. “It means I made a difference.”

The dedication to give back to the community has played a central role in the establishment of the first masjid in Alamance County.

After opening in 2015 to serve a growing number of Muslims in Alamance County — which Sayed estimates is more than 250 — members of the masjid have made their intent known publicly: They are an open community for anyone who wants to receive good and do good.

Days before their opening, they worked with Life’s Journey United Church of Christ, to host a open day of free, hot meals and health screenings to the public.

Working jointly with other organizations including the Pelham Community Center and NAACP, they have also serve food pantries and homeless shelters on a monthly basis. They have also helped serve refugee communities through campaigns to provide food and clothing.

In January, they also plan to begin a free community clinic at the masjid that will provide free health screenings for a variety of health concerns, including issues that arise from hunger.

“Community members who don’t have insurance can walk in and get basic medical screening, and we can refer them to specialists if needed,” Sayed added.

Joel Harter, associate chaplain for protestant life at Elon, said the masjid is doing excellent work in the community and that students should join them.

“They are an excellent example of a good neighbor, and more importantly, are seeking to do this in cooperation with other groups and faith communities,” he said. “In this particular case, cooperation signals that we welcome and appreciate the Burlington Masjid as part of our larger community. This is an important message within the context of rising incidents of hate towards Muslims in America.”

“My heart is not closed for Muslims,” he added. “It’s for everybody.”

To face the issue of hunger, he added that religious lines don’t matter, working in joint-partnership with many faith-based groups including Allied Churches.

The First Baptist Church of Burlington is one of many other churches in Alamance County that also committed on addressing the issue. Donna Harwood, who works with their service initiatives, resonates with the issue closely.

As an elementary school teacher in North Graham, she recalls times when she would collect and save crackers and juices to give to students whose learning was affected by hunger.

“Many of the times, they would be more easily distracted — they had their mind on snack time,” Harwood said. “They were just hungry.”

Working with other members of the First Baptist Church of Burlington, Harwood addresses the issue head-on through their bag ministries program with Hill Crest Elementary School. Through donations, the church began preparing boxes of food — including canned vegetables, rice, jars of peanut butter — for 26 students in the school. Social workers at the school place the boxes into the bags of students who may require additional nutritional support, especially over the weekend.

Donna said she believes faith creates the opportunity to bring people together for common good.

“I think it would be interesting if the faith based groups could come together and learn from each other,” she said.

“We are all communicating on how to be better and how to do better,” he said. “We all serve the same role of being helpful for others.”

More work needs to be done

When Carol Willaird, a retired member of the Burlington community who often volunteers at food service organizations, including Southern Alamance Family Empowerment Food Pantry (SAFE), was asked why she does what she does, her answer was unwavering: “Because I was there.”

“I know how people feel and think in these situations,” she said. “And I have a passion because I’ve been there.”

She added that in order to truly understand the issue, volunteers must immerse themselves in the communities they help.

“I don’t think you can truly understand until you put bags of groceries in peoples cars and have them cry and hug you,” she said. “And you can’t find that experience in your classroom — an experience of that magnitude can only be found when you walk outside your own comfort zone and meet someone else in their own place in their need.”

But for Willaird, serving the community by working in food pantries is only one of many steps required to eradicate hunger.

She noted the ways in which government assistance programs — including the Supplemental Nutritional Assistance Program (SNAP), formerly known as Food Stamps — are a limited benefit.

“You either qualify for it or you don’t,” Willaird said. “It also places limitations on people who work during the weekends. How can we sit in offices to collect and access these resources when we work Monday through Friday?”

A report released in April 2015 titled, “The State of Senior Hunger in America 2013: An Annual Report,” ranks North Carolina in the Top10 states for the number of seniors (60 and older) who are food insecure.

It estimates that in 2013, more than 18 percent of seniors in North Carolina experienced the threat of hunger. Those at greatest risk for food insecurity among seniors are the poor and near-poor, people of color, the unemployed, the disabled and those residing in the South or Southwest. Among age categories of seniors, the people at highest risk are the “youngest old,” defined as age 60-69.

“Greater change will happen when someone outside the government decides to try to fix the problems with social securities or food stamps,” Willaird said. “Until someone who has lived it and done it raises awareness that those entitlement programs will never work for people who are struggling.”

She encouraged Elon students to get involved and place the topic of hunger in the context of real lives.

“I would guess that, in my opinion, a large majority of Elon students have a car and a nice apartment and a credit card,” she said. “But all students need to understand that people you might consider to be ‘normal people,’ are hungry.”