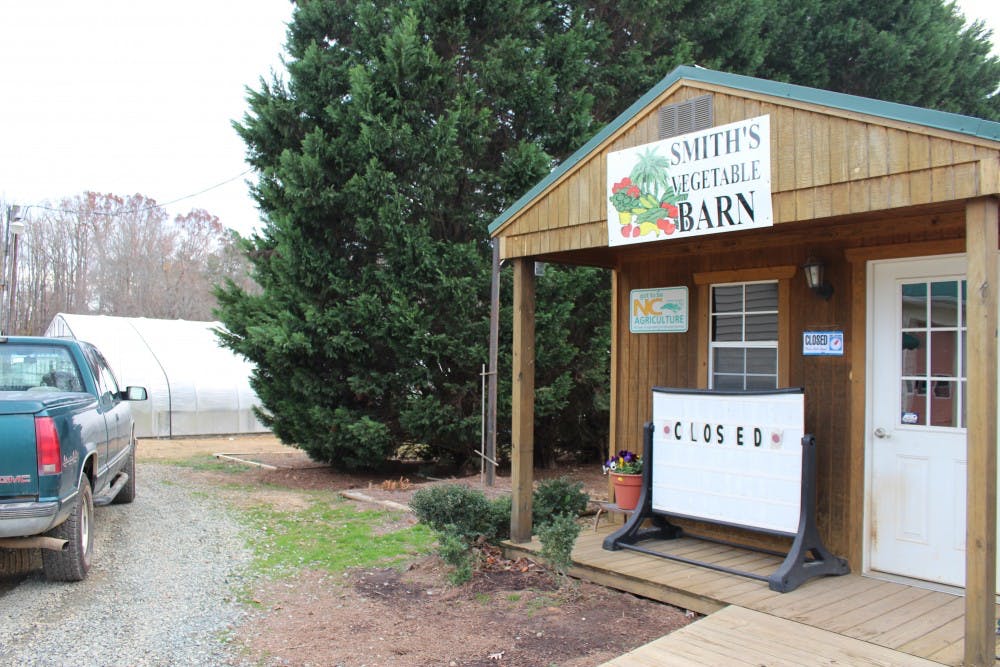 
The Smith Farms produce stand closed in mid-November after the fields were harvested. Currently, the fields are given time to replenish their nutrients before the harvest season picks up again in early April and they sell at various farmers markets, including the ECC Farmers Market.

Every Thursday from mid-April to mid-November, the lawn next to Elon Community Church is filled with a vibrant variety of fresh produce, meats, cheese, pastries and flowers.

But after Nov. 17, the lawn is bare again as the Friends of ECC Farmer’s Market closes for the season, and the farms begin to shut down too.

According to Sandra Sarlinga, coordinator of the ECC Farmers Market and owner of Piemonte Farm, the market runs during these times because of weather and what would be available at the market.

“We don’t have farmers that can bring produce year-round to the market,” she said. “We have a lot of people who are church member[s] and a lot of them are seniors. I can’t imagine how many customers we would have in the winters.”

At the market, none of the produce farmers grow during the winter — despite having greenhouses — so there wouldn’t be enough products to sustain the market.

“The farmers market is mostly farmers, so the farming component has to be there,” Sarlinga said.

One of the main factors that got Tamara Smith, of Smith Farms in Gibsonville, involved with the ECC Farmers Market is that it matches with her harvest season.

“Our sales coincide perfectly with the market being open,” Tamara Smith said. “Once we get into the coldest of nights, there’s nothing that will grow. Our fields have been turned.”

According to Tamara Smith, their farming begins in February when the crops that take 60-90 days to fully grow are planted in the greenhouse. Then, they are moved to the field and are ready to be harvested around March. These crops include broccoli, cabbage and onion.

The farming will continue until the summer months where seasonal laborers will work 60- to 70-hour weeks, harvesting and tending to the plants.

“During the summer when things are busy, you’re ordering seeds for next year,” Tamara Smith said. “You’re deciding what your vegetable crops are going to be. Now it’s just not the stress, not the running up the road, not the harvesting, the washing, the prep — it’s a different kind of work.”

At Redbud Farm in Burlington, co-owner Clay Smith is able to continue to sell his sweet potatoes to the Company Shops Market, but the farm otherwise takes a break during the winter months.

“We plant a cover crop on our fields as soon as our fields aren’t in use,” Clay Smith said. “It protects the field from the winter, and it increases fertility quite a bit. We also get things like tomato stakes out of the field and close things down.”

Though by mid-January, Clay Smith said they begin the early transplant of seeds in their greenhouses to prepare the crops for the fields.

Despite still being able to make her cheeses at Piemonte Farm, Sarlinga said they don’t make as much money during the colder months. This is because the other farmer’s markets they attend have shorter hours and less clientele.

But tending to the animals takes more work.

“In our case, we make cheese, and we can keep doing that like nothing happened,” Sarlinga said. “You have to be attentive because water freezes, and the daily care of the animals in the winter is a little more rough.”

Sarlinga needs to make sure snow doesn’t cover the animals’ food and water isn’t frozen. Near the end of February, the baby lambs are born, so Sarlinga needs to give extra attention to the moms and newborns.

According to Tamara Smith, her farms make enough during the harvest season to sustain the time when they don’t sell anything. But Clay Smith also relies on additional finances to sustain himself.

The ECC Farmers Market gives them a chance to interact with those located closest to their farms.

“The Elon market gives Smith Farms a weekday outlet to clientele that don’t necessarily come to us,” Tamara Smith said. “It gave us that Thursday opportunity and customers that might not come to our farm.”

The farmers also have a chance to learn through those attending the market. Because of his interaction with customers, Clay Smith has started growing Japanese sweet potatoes, Japanese greens and various hot peppers.

“We really appreciate the interactions with the customers, and we are growing some crops we never thought about growing because a customer said, ‘Have you ever grown so-and-so?’” he said.

Clay Smith believes that it is this connection that keeps the ECC Farmers Market strong and is why they will be back with more produce in the upcoming spring.

“A lot of it goes back to the farmers market because it really creates a community that’s different than selling produce,” Clay Smith said. “It’s about making connections around food and learning recipes.”