Lambert calls Danieley a "beloved and irreplaceable figure in this community" 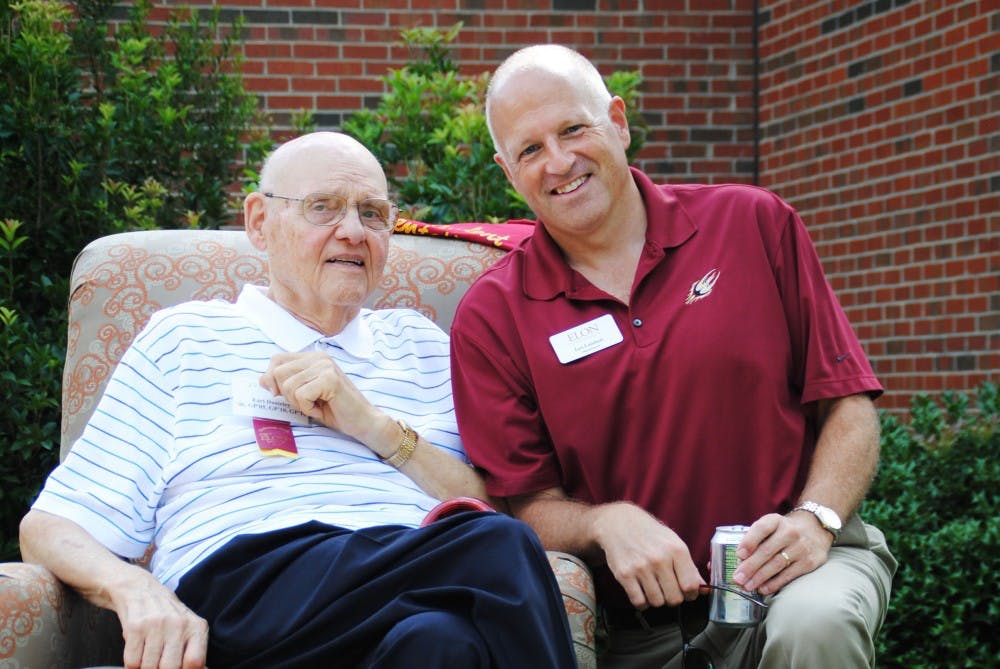 He and his wife arrived at The Village at Brookwood Sunday night expecting to see Dr. Danieley approaching his end. When Elon University President Leo Lambert paid a visit the day before, he saw Danieley was not the same person.

“I think I just said goodbye to Earl," Lambert told his wife after Saturday's visit.

But on Sunday night, there was a glimmer of hope that Danieley would return to his old self.

"He woke up and we had a marvelous conversation," Lambert said. "He was his old self, I mean, it was unbelievable."

Danieley spoke with Lambert about some of his favorite memories, sharing stories of Elon's basketball team and his daughter's wedding.

"It was remarkable," Lambert said. "His memory, the clarity was crystal clear, and I thought to myself, 'Wow, maybe he will get back to another basketball game.'”

Two days later, Danieley died at the age of 92.

"He lived a vibrant, vibrant life right up until the very end," Lambert said.

For Lambert, Danieley was much more than a colleague. He was a mentor and a dear friend.

"To have somebody who has had that experience and be your very good friend and adviser over 18 years just has meant so much to me," Lambert said. "I can’t even begin to form the words to tell you how much I’m gonna miss him."

It was a sunny April afternoon and Lambert was leaning back in his chair. He kicked his feet on top of his desk, sorting through the many memorable moments that came to mind when thinking about the experiences he has shared with President Emeritus J. Earl Danieley.

“He’s just one of the most remarkable human beings I’ve ever met, and certainly a beloved and irreplaceable figure in this community,” Lambert said in an interview earlier this year.

When Lambert was named president, Danieley and his late wife, Verona, invited him to join them at church one Sunday and go out to brunch afterwards.

When Ike Belk wanted to donate a large sculpture, Lambert and Danieley teamed up to try to convince Belk to provide funds for a track instead. Shortly after the three of them had a meeting, the university got both the track and the sculpture.

When Lambert decided to change the nickname from the Fightin’ Christians to the Phoenix within his first six months as president, he received backlash from several people. But during an annual faculty/staff golf tournament, Danieley showed up proudly wearing a Phoenix T-shirt to give his blessing.

These are just a few of the countless memories that Lambert said came to mind when reflecting on Danieley’s legacy.

Lambert feels blessed to have had the opportunity to get to know Danieley, and is saddened by the fact that future students will miss out on some of the experiences he has had. Even so, he said he believes Danieley’s legacy will stand the test of time.

“Future generations of students are not gonna experience Earl’s hugs and his gigantic hands and seeing him at basketball games,” he said. “I already feel it as a loss. Undoubtedly, his name will last around here for a very, very long time to come.”

He also described Danieley’s challenges in building up Elon College’s reputation. The institution was in poor financial shape when Danieley took over as president in 1957 at the young age of 32, and lacked a strong academic reputation.

Lambert remembers the story behind Danieley’s appointment as president. Danieley was at John Hopkins doing the dishes with his wife. He got a phone call and returned to tell his wife that Elon named a new president.

“She said, ‘Oh really. Who did they name?’ Lambert recalled. “And he said, ‘Me.’ The story that he famously repeats is that she had a two-word response, which was, ‘Poor Earl.’”

During Danieley’s time as president, he created a stronger sense of stability, which is how Lambert categorizes the 'Danieley Era.'

“When Earl left the presidency in 1973, and turned the institution over to Fred Young, the institution had moved from this place of struggling financially and academically to a place of balanced budget. He had established a much, much more secure footing for the university,” Lambert said.

But Danieley was a professor at heart and in recent years continued to teach classes as a member of the faculty of the department of chemistry.

“He really loves this community,” Lambert said. “He could’ve gone somewhere else to be a chemistry professor. But he loves Elon.”

Though he lost a "very dear friend" on the day of Danieley's death, Lambert was happy Danieley's last days were as reflective of the passion of his life.

"He was at a basketball game just a short time ago, and you know, we can all only hope for that two days before you die you’re as lucid and as loving as you can possibly be, and that was Earl," he said.