A handshake and a hug: Danieley move-in tradition remembered

President emeritus would sit in a chair in the Danieley Neighborhood, named for him, to greet new students on move-in day 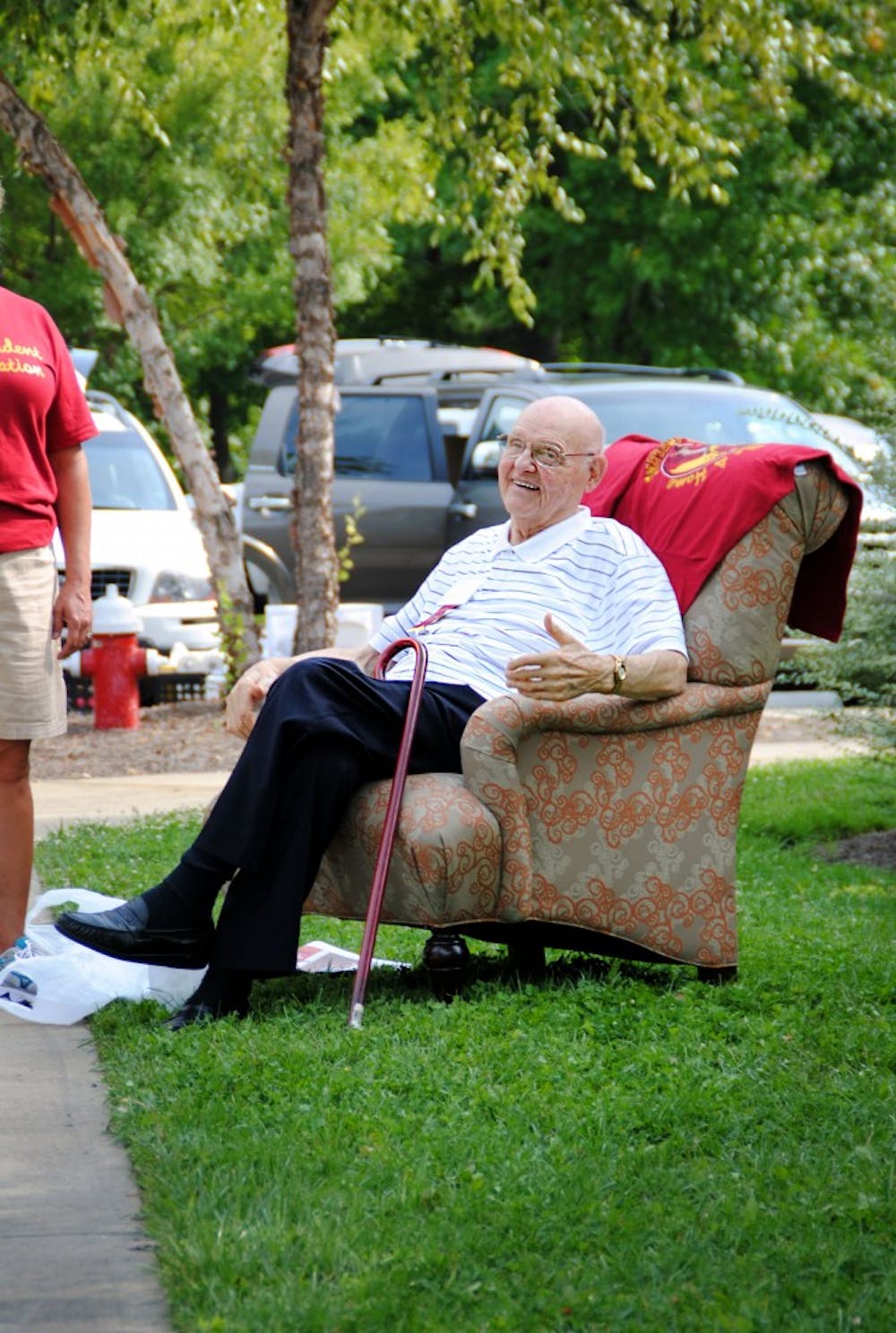 "Since we've had Danieley Center, I've been stationed here every year. But this is the most luxurious chair I've ever had," said Earl Danieley, president emeritus, who was stationed out near Danieley K on Freshman Move-In morning. Photo by Claire Esparros.

But for those moving into Danieley Neighborhood, at the end of the longest line sat the man the neighborhood was named after: President Emeritus J. Earl Danieley.

"He would just be sitting in his armchair and just cracking jokes and asking people where they’re from, and then honestly making small talk just to make them feel better," said Evan Skloot '16. "And then give out some nice big hugs."

A 'way with connecting'

But though those lunches and speeches meant a lot to Skloot, he said nothing was more important to orientation than Danieley sitting outside in his faded red armchair, the most important friendly face in a sea of orientation and residence life staff.

"Dr. Danieley just has this way with — I won’t even say way with words, just way with connecting with anyone," he said. "He just understands. He’s been here for 70 plus years. He has seen every type of student, every type of parent, of family — he gets it.

"He knows what to say, what to do to make them feel better."

Even toward the end of his life, Danieley still stuck it out — even in the steamy North Carolina August.

"My first year it was so hot outside during move-in, and he was just smiles the entire time, shaking hands," she said. "I kept checking in like, ‘Do you need water? It is so hot.’ Because he wasn’t under shade. But he was still just as smiley, just as positive, shaking hands with all the parents."

Skloot remembers that move-in day, too. He was an orientation leader working move-in day in Danieley Neighborhood then.

"[Danieley], despite being a 90-year-old in brutally hot weather in the middle of a North Carolina summer, you could not tell," Skloot said. "You would not know that he probably was incredibly uncomfortable physically. His demeanor and the way he interacted, you could have thought he was in the air conditioning. It did not matter to him."

Skloot remembers moving into Danieley Neighborhood his first year at Elon and shaking Danieley's hand, but he has no idea when the tradition started. As far as he and Biermann remember, Danieley has just always been there.

"It was just a thing," Biermann said. "I don’t even know when it started, it was just like, ‘This is a thing that always happens.’ Dr. Danieley’s chair is gonna be outside, it’s gonna be waiting. So they’d set that up ahead of time."

Biermann — who was still community director in Danieley Neighborhood in 2014, the last time Danieley was able to sit outside during move-in day — said she has seen the impact the move-in day conversations with Danieley has on new students.

"He is still willing to come and make that positive mark when students are moving in their first day," Biermann said. "[New students think,] ‘I get to meet a former president of Elon that still comes to every single basketball game and is still a big part [of Elon] — on my first day moving into here?’"

"I think through those conversations [with Danieley], students have better understood the impact that they can have during their experience here, even if it’s not as long as Dr. Danieley’s been here," she added.

Skloot is one of those students who was forever changed by his interactions with Danieley.

"When he spoke this past summer during orientation leader training, that was actually the moment when I realized that I really wanted to go into higher ed administration," he said. "When he was speaking about their community and the relationships he’s built and the amazing life that he’s had, I realized at that moment that that was what I wanted to do."