Trump to one accuser: ‘She would not be my first choice’ 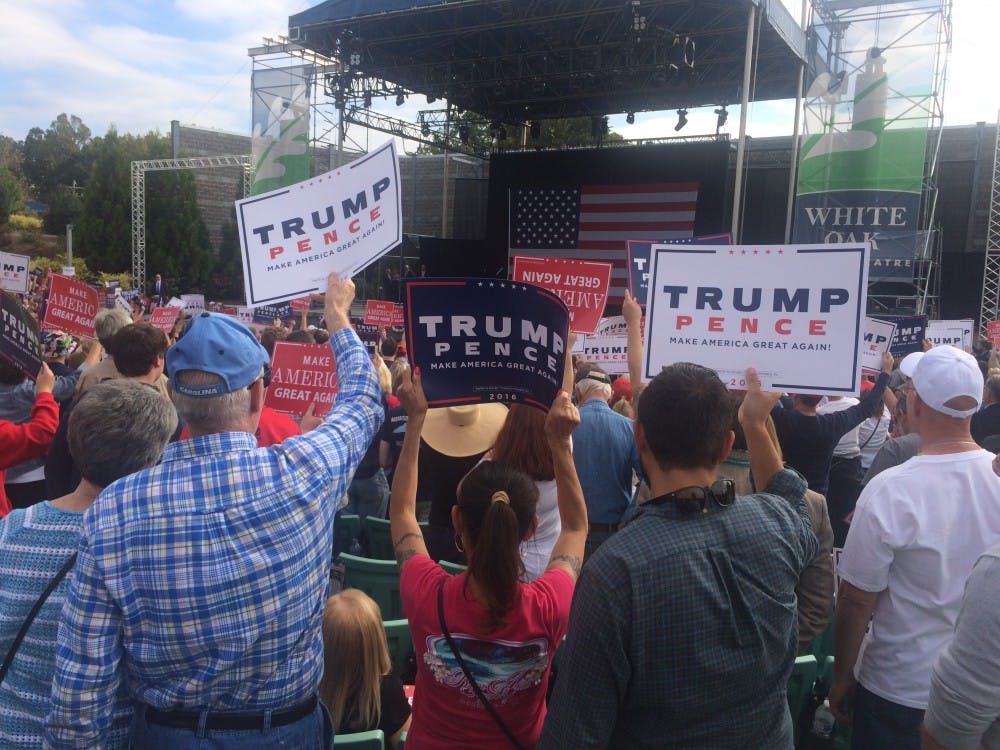 
Supporters at the White Oak Amphitheatre in Greensboro express support for Republican Donald Trump during rally.

GREENSBORO — Republican presidential nominee Donald Trump spent much of his time at a Friday-afternoon rally in Greensboro bashing the media and defending himself against sexual assault allegations.

One of the more notable moments of the rally came as Trump discussed Jessica Leeds’ accusation that he had inappropriately touched her on a flight to New York in the 1980s.

“The only way they figure they could slow it down is to come up with people that are willing to say, ‘Oh, I was with Donald Trump in 1980. I was sitting with him on an airplane and he went after me on the plane,’” Trump said.

Trump’s speech was evenly divided, with the first half focused on responding to recent accusations of mistreating females and lashing out at members of the media.

“The stories are total fiction,” Trump said. “They’re 100 percent made up. They never happened.”

"It's a total setup," Trump said. "Now, suddenly after many, many years, phony accusers come out less than a month before one of the most important elections in the history of our country."

Greensboro resident Lisa Fullington, 64, arrived three hours before the event to protest Trump’s appearance and speak out on his lewd comments toward women in 2005.

“He does not respect females,” Fullington said. “He is a misogynist. He’s a narcissist. He thinks he can go in and grab anybody’s private parts. That is just absurd in this day in age. This is 2016 — this isn’t the 1600s.”

“All of us across this country have just been appalled by the news, the allegations, the stories that are coming out every day now about Donald Trump’s outrageous behavior,” Schrock said. “His actions, not just his words.”

The rally was charged with emotion for those in attendance as well. While Trump was speaking critically of the press and his accusers, one protester was escorted out of the White Oak Amphitheatre. As he was being escorted out, one Trump supporter pushed the protester in the back.

Trump was interrupted by a protester in Greensboro and this happened: pic.twitter.com/Hzc2Z82gNu

Appears that a Trump supporter got escorted out after pushing a protester. pic.twitter.com/dXn6VQ3GTY

Recognizing the divisiveness of this election season, Trump told the audience he would offer a unifying message for the country if he were elected president.

“I’m going to fight to bring us all together,” Trump said. “We’re a divided nation, a very divided nation right now. We’re going to be a unified nation. Imagine what our country could accomplish if we started working together as one people.”

At one point in the rally, Trump asked the roughly 4,000 attendees whether they wanted to hear him defend himself on the recent sexual assault accusations. The audience reacted largely with applause, though one person shouted at him, “Stay on the issues!”

Trump later said his movement should try to stop the sickness of the media and overcome the, “terrible deception” that has taken place.

“We are destroying our country with these sick people back there, and they know it better than anybody in this arena,” Trump said, pointing to members of the media.

Trump specifically called out the New York Times for publishing an article with two women accusing him of sexual assault.

He talked about the Mexican heritage of Carlos Slim, a major shareholder in the paper, and claimed reporters are not journalists.

The second half of Trump's speech went back to his typical talking points of immigration and trade.

“If I win, day one: We are going to announce our plans to renegotiate NAFTA,” Trump said. “If we don’t get the deal we want, we’ll leave NAFTA and start over to get a much better, a much more fair deal because right now we’re a one-way highway into Mexico.”

Mark Small, 46, said he supports Trump because he believes Trump will best be able to solve the nation’s economic problems. A former welder with current health problems, Small said he thinks Trump would do a better job than Democratic presidential nominee Hillary Clinton in creating jobs.

“They keep talking about how he may not be as rich as he thinks he is, but he’s a lot richer than most people, and he’s created a bunch of jobs,” Small said. “She hasn’t created any jobs.”