After a petition to have the speaker banned, students explain the meaning behind the outrage 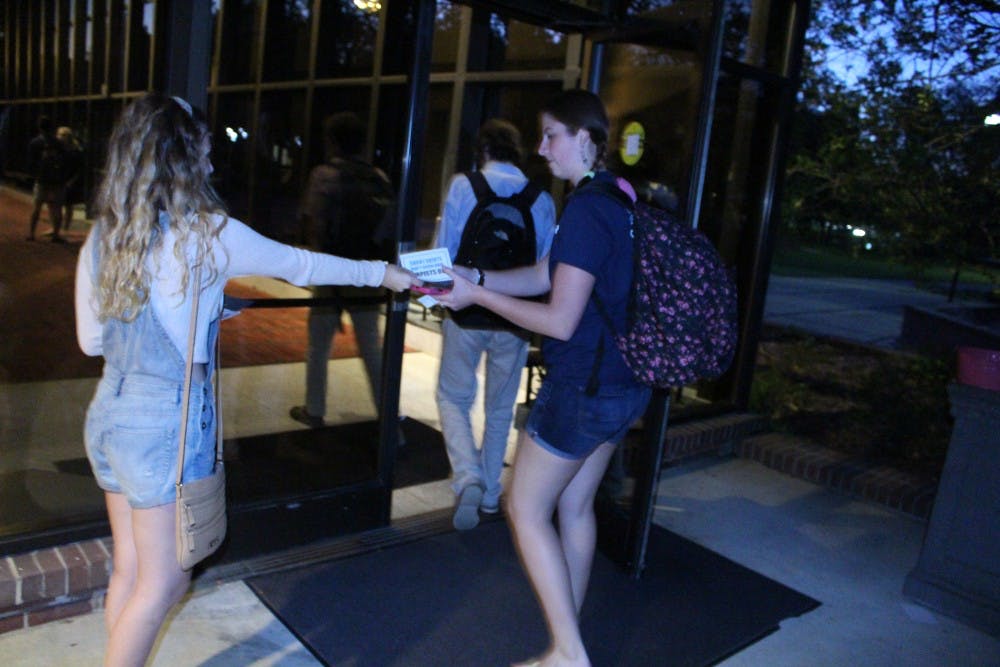 
Students from EFFECT handed out literature on feminism and rape culture before they attended Kathleen Parkers speech.

Outside McCrary Theatre Tuesday night, some unexpected faces greeted faculty, students and community members. At the doors on either side of the venue, Elon Feminists for Equality, Change and Transformation (EFFECT) handed out flyers in silent protest of the Kathleen Parker Baird Lecture inside.

“Would you like some literature?” said the greeters as they passed out flyers about feminism, being an active bystander and rape culture victim blaming, along with resources for survivors of sexual assault.

“I’m here to challenge and present a perspective that will make other people feel safe,” said senior Stephanie Scro, a member of EFFECT.

Scro claimed that Parker’s 2008 book, "Save the Males: Why Men Matter, Why Women Should Care," is harmful toward domestic violence victims because of the way it portrays sexual violence as the fault of the female.

Scro hoped to protect those victims on campus who may have felt uncomfortable by this rhetoric.

“Our only option was to directly challenge her and show our support for survivors,” she said. “By not speaking up, there would be a lack of resources and a lack of support.”

Though Parker began her speech by addressing the petition that sparked this controversy, she focused the rest of her talk on the current election. In her book, Parker acknowledged she probably wouldn’t have written it the same way today and claimed to have never read it when it was fully finished.

After the hour long lecture, Scro and a few of her fellow EFFECT organization members sought to challenge Parker by asking strategically planned questions in the Q&A session.

It was then that the students asking questions felt she responded defensively.

In response to Scro’s question about her 2008 book and the portrayal of sexual violence victims, Parker said, “That was years ago, I’d rather talk about something much more recent.”

Scro continued, providing the facts and quotes she carefully researched before the event. She brought up the statistic that one in four females are victims of sexual violence and wanted to know why Parker wrote in a way that suggested these instances were the female's fault.

"I think you're boring other people," Parker interjected. "I'm against rape, and I've never been raped."

When Scro attempted to continue to ask the rest of her question, she was interrupted again.

"This is one of those subjects that isn't worth it,” said Parker. "I'm a devil's advocate ... I would never blame a victim."

And then, "Can somebody ask me something nice now?"

“I think she was very rude to my questions," Scro said after the lecture. “She cut me off a lot and wouldn’t let me speak. It was almost as if she couldn’t be wrong.”

Sophomore Stefanie Milovic felt similarly. When Milovic stepped up to the microphone to ask a question about Parker's demeaning language about Trump supporters, Parker responded, "I'm kind of a comedian as well as a columnist. I like having a little fun. It's just a joke. Can't you take a joke?"

“With both others and myself, I felt like she was very unprofessional and inappropriate,” Milovic said.

Associate Professor of Communications Amanda Sturgill, who introduced Parker, showed support to Milovic for speaking up about an issue that was important to her after the event.

Milovic expressed her disappointment in the evening, claiming Parker would not take responsibility for what she had said.

“Be a voice to the students. Be someone who inspires us. As a female, I should look up to her,” Milovic said.

Professor of Communications Glenn Scott reflected on the event with an appreciation for Parker's work, but he did not deny the tension during the Q&A session.

“If I were to advise [Parker], I might have said it’s OK to be a little bit more sincere and appreciate and respect what people were saying," he said. “I think [the students involved in the silent protest] are glad they at least had the chance to air their thoughts and their concerns."