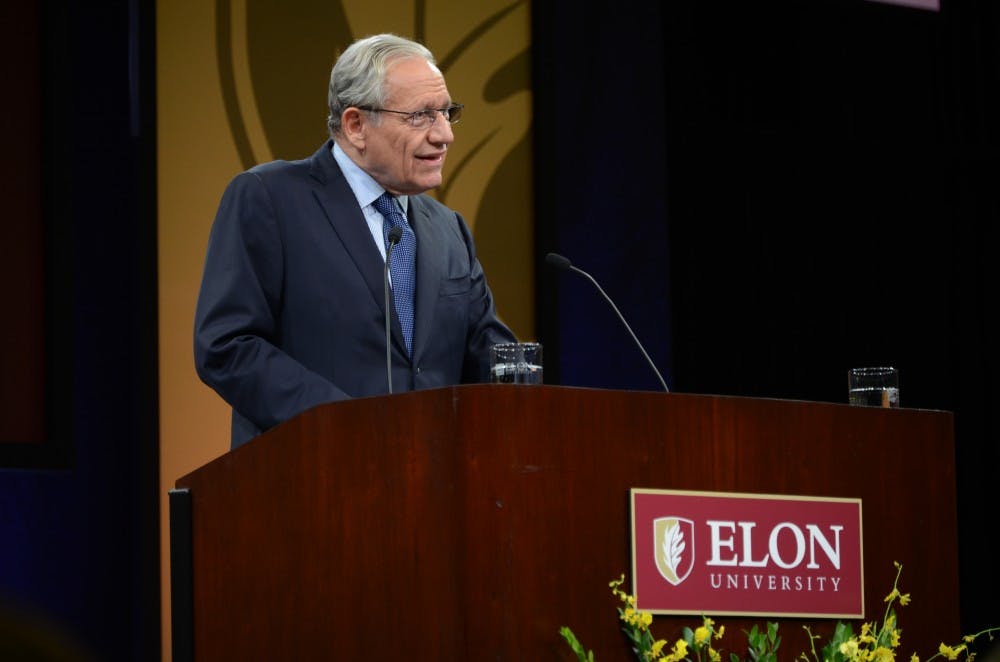 Pulitzer Prize-winning journalist Bob Woodward will deliver Fall Convocation at 3:30 p.m. today in Alumni Gym. This page will be updated with a live blog for today's Convocation beginning at 3:30 p.m.

4:52 p.m. Event has concluded. Thanks for tuning in to our live blog. Stay tuned for further coverage from the Elon News Network.

4:47 p.m. "We don't know enough about what goes on in the centers of power, particularly the White House." -Woodward

4:45 p.m. Woodward on how much people know about Clinton and Trump's personalities: "We do not know what's going on on the inside of these two candidates."

A week before Nixon resigned, his chief of staff came to Gerald Ford and said Nixon would resign if he got a pardon. Ford rejected the deal and couldn't talk about it otherwise he would implicate the chief of staff. Ford told Woodward he never wanted to be president. Ford then said the only way the country could move on from Watergate was with a pardon.

4:35 p.m. Woodward not talking about mistakes in reporting.

4:28 p.m. He estimates Clinton's chances of winning are about 75 percent.

4:25 p.m. According to Woodward, there are two unknowns in campaign: Trump's tax returns and the 14,900 emails that the FBI found on Hillary Clinton's server that are work related but are not turned over.

"She clearly won the debate. No question about it. Here's her problem ... there is a self satisfaction, self congratulation, an unfortunate lack of humility and smugness that comes through to people ... She didn't say, 'I prepared because I want to do things for you, the public."

4:17 p.m.  Woodward shares how Republican presidential nominee Donald Trump rose to prominence: "Trump says I'm going to kick the shit out of the system, and he picks up that anger. It's not just anger, it's a sense of things have not worked for me and I'd like them to be fixed."

4:13 p.m. Woodward on role of president: "My definition of what a president must do is figure out what the next stage of good is for the majority of people in the country. The real majority not of one party, not of an interest group."

4:01 p.m. Woodward jokes presidential candidates may inflicting harm on themselves.

3:54 p.m. Woodward says it was President Richard Nixon's hate that did him in and led to his resignation.

3:51 p.m. "Can you imagine anything today passing in the United States Senate 77-0 unanimously? What happened then was dozens of Republicans joined in voting for this investigation...in the spirit of let's find out what really happened." -Woodward

3:49 p.m. Woodward takes to stage, talks about Watergate Scandal: "The problem we had was by and large these stories were not believed."

3:48 p.m. "You seek the truth and tell the story no matter where or what the facts reveal." -Copeland

Woodward is an associate editor of The Washington Post who began working for the outlet in 1972. He is most famous for helping uncover the Watergate scandal in 1972 alongside Carl Bernstein.

Woodward earned his first Pulitzer Prize in 1973 for his investigative reporting of Watergate and secured his second Pulitzer in 2002 for his contributions as the lead reporter covering the 9/11 terrorist attacks.

His coverage of Watergate revealed President Richard Nixon's administration recruited men to break into the Democratic National Committee (DNC) headquarters at the Watergate office complex in Washington, D.C. The investigative reporting behind the Watergate scandal led to Nixon's resignation.

Woodward's is also widely known for having authored or co-authored 18 books, including his latest book, "The Last of the President's Men." This book analyzes 46 hours of interviews with Nixon aide Alexander Butterfield, who revealed the secret White House taping system. Twelve of Woodward's 18 books have been No. 1 national best sellers.