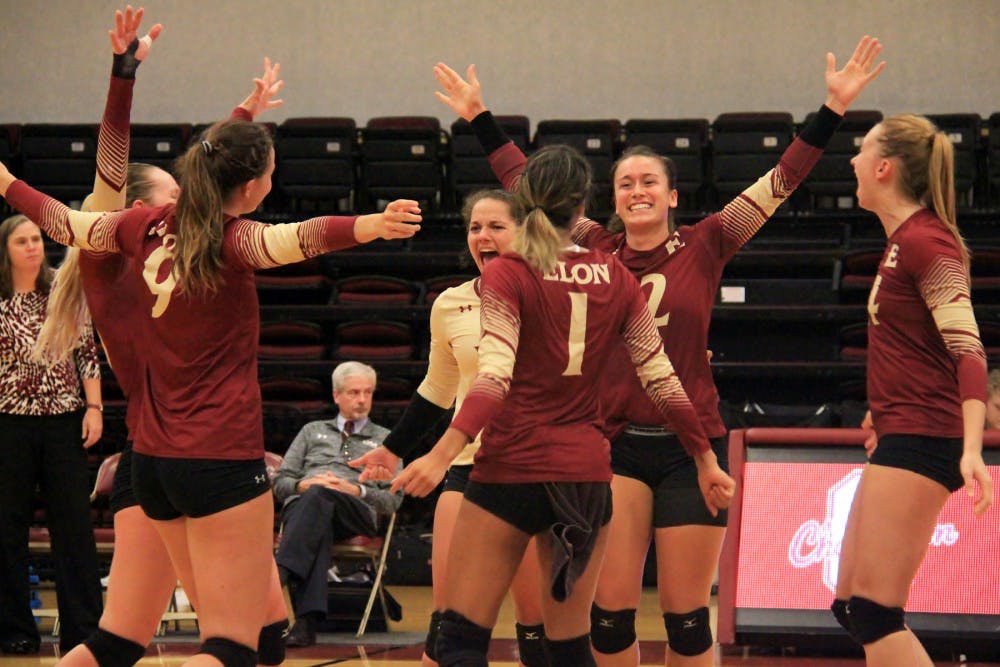 
The Elon University volleyball team celebrates during its victory over Wofford College Sept. 9.

Led by terrific defense from sophomore outside hitter Kam Terry and relentless offensive attacks from a host of players, Elon defeated Gardner-Webb University 3-1 (25-20, 25-19, 22-25, 25-15) to win its sixth straight match.

Terry recorded a career-high 16 digs in the four-set win and said her teammates’ energy was infectious.

“The energy on the court tonight was really high, and it kind of got to me,” Terry said. “I just felt the drive more tonight than we ever have before. Our team chemistry is building every single game.”

Though Terry is known more for her offensive prowess — she leads the team with 152 kills — Elon coach Mary Tendler said she wanted setters to distribute to different players to disrupt Gardner-Webb’s defense.

“Gardner-Webb had a really good block on their side, so we had to mix up our offense,” Tendler said.

Unlike prior tournaments Elon has hosted, the Phoenix played four matches in just two days. Tendler said she was able to give more playing time to those who haven’t gotten as much, which helped boost the team’s confidence and chemistry.

The Phoenix came out swinging from the start with seven consecutive points to begin the first set. After winning the first two sets, Elon struggled to pull off a comeback in the third.

Elon was down 23-17 in the third set but managed to score five straight points to narrow the deficit to one. When the Runnin’ Bulldogs sealed a 25-22 win, the Phoenix went on the offensive in set four. Elon got an 8-0 run to take a commanding 13-4 lead and ultimately win the final set 25-15.

“Our team is capable of doing so much more than we’ve ever done before, and I think it’s definitely showing now,” Terry said.

Junior setter Sydel Curry said she was most proud of her team’s resiliency and cohesiveness throughout the tournament.

“On and off the court, we have such a great chemistry and we all get along and we work together. That’s the main component of volleyball. You can have all the skill you want, but if the team just isn’t cohesive, it’s not going to happen. We’re a really cohesive team.”

Tendler said her players should be confident going forward because of their successes in the Elon Phoenix Classic. Elon went 12-3 in sets during the tournament and pulled off a huge five-set win Friday night against Wofford College.

The Phoenix will look for its seventh straight win at 7 p.m. Tuesday night at North Carolina Central University.