Message to Elon students: "There is no boundary on software. It is a limitless opportunity. Whatever you can imagine, you may, in fact, be able to program." 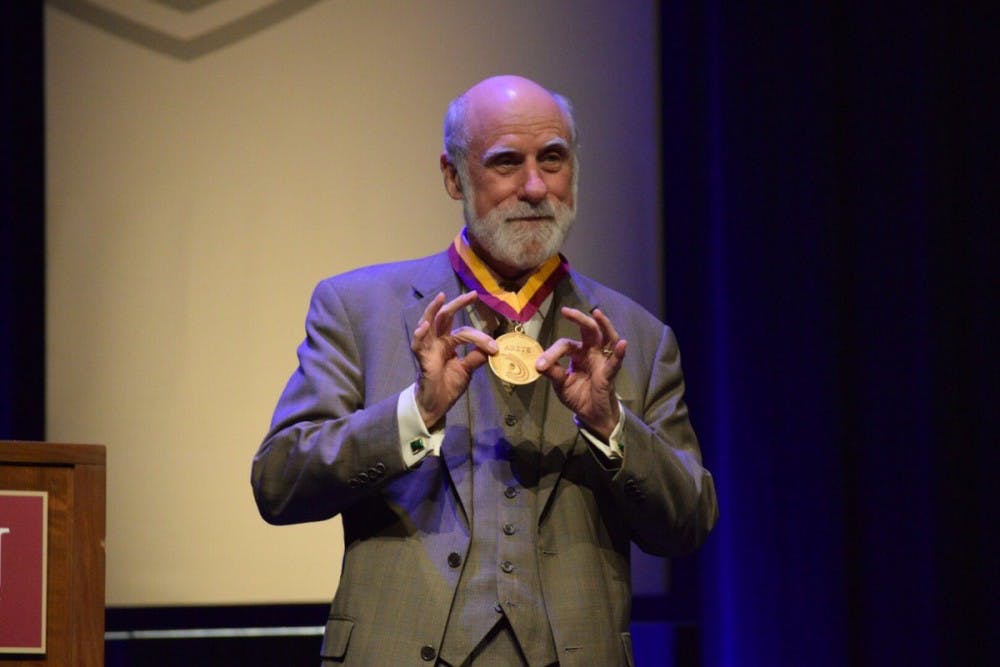 
Elon University presented Vint Cerf, a tech pioneer recognized as one of the "fathers of the Internet," with the Areté Medallion for his public service.

Vint Cerf, a vice president at Google and a tech pioneer nicknamed as one of the "fathers of the internet," spoke optimistically about technological innovation in his talk, "The Internet of Things," Friday afternoon at Elon University's McCrary Theatre.

With artificial intelligence, machine learning and the internet of things as frequent talking points, Cerf showed the sold-out crowd several robotics videos with the hope of offering them a more positive perspective on the future of the technology."These devices actually have the potential to do useful work," Cerf said. "People who are nervous about robots and say that they're going to take over, I think, are overly pessimistic about this. It's my belief from the optimistic point of view that these programmable devices of the internet of things and the artificial agents that we build will actually be our friends and be useful."

Before the event, Elon President Leo Lambert presented Cerf with the Areté Medallion for his public service and promotion of innovation.

Janna Anderson, professor of communications and director of Elon's "Imagining the Internet: A History and Forecast," was enthused to see Cerf gain the recognition and grew emotional introducing him to the event attendees.

"He and Tim Berners-Lee, I think, are the Paul McCartney and Mick Jagger of communications for us," Anderson said. "They rock, okay? They rock, man! You have to be excited about this because this is a wonderful opportunity to spend time with him.

"Where we are today is greatly due to their commitment to do good and tirelessly work for a better future."

Cerf played several videos of human-like robots from Boston Dynamics during his talk to highlight ways in which people are working to build on his progress of creating a better future. The robots shown in the clip below lift up boxes, walk around in the snow and even get up after being pushed to the ground.

"There's something slightly unnerving about this," Cerf said.

Cerf encouraged those in attendance to explore the field of computer science.

"There is no limit," he said. "There's no boundary on software. It is a limitless opportunity."

Senior Maddie Chili studies computer science and communication design at Elon and has a passion for robotics. She left the event pleased with Cerf's thoughts on technology serving as a force for good.

"Robotics is an interesting topic," Chili said. "It does a lot of good. People have fears that it's going to take over, they're going to break and all these things, but we watched a lot of videos that show they're helping in medical industries."

Jonathan Albright, assistant professor of communications, praised Cerf for how he delivered his message.

A consistent theme throughout Cerf's speech was that, while technology may have its flaws and carry unintended consequences, the benefits greatly outweigh the costs.

Cerf used the example of Google's self-driving cars to illustrate his point.

"We've now driven a couple million miles in the San Francisco area with these things," he said.

Though there have been a few accidents, the technology's potential is limitless. Cerf shared one interesting story where one of the self-driving cars stopped at an intersection and didn't go anywhere. When employees tapped into the video to find out what was happening, they saw a woman in a wheelchair in the intersection chasing a duck with a broom.

"I confess to you, I wouldn't know what to do," Cerf joked. "The car sat there just thinking, 'There's stuff moving. I don't want to run into it.'

Cerf made his talk accessible to a student audience unfamiliar with technical aspects of innovative technology. At the same time, he still delved into more complex subjects like speech recognition, the deep web and Google's knowledge graph.

When discussing some of the strides made in speech recognition, he described Google's efforts to enhance the searching experience.

"We're starting to tie conversation together," he said. "One of the big objects of Google has been to achieve a kind of interactive interface. For example, Google Search, where you're not simply asking for search terms, a sentence, statement or question — but rather an interactive engagement."

Though Cerf largely discussed the benefits of technological innovation, he ended his talk reminding those in attendance to make sure innovation is implemented safely and reliably.

"We need to remember that programmable devices are made out of software, and we don't know how to write perfect software. We don't know how to write bug-free software," Cerf said. "So the consequence is that however much we might benefit from these devices, and programmable things in general, we also have to be aware that they might not work exactly the way they were intended to work or the way that we expect them to."