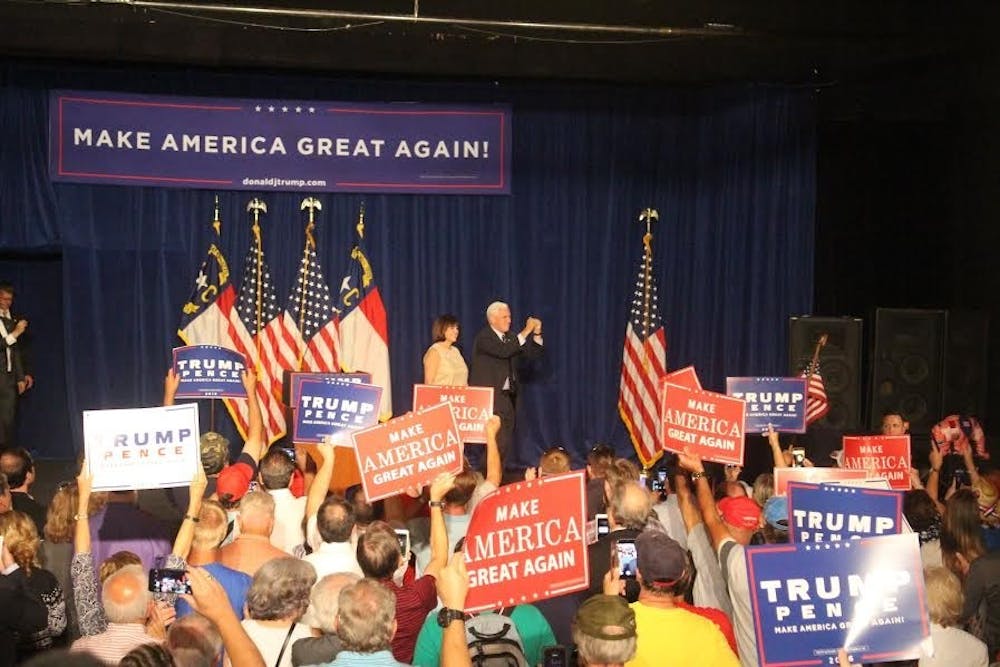 This is Pence’s second time in the state this month. At a rally last week in Wilmington, he said, “The road to the White House is through North Carolina.”

With just 70 days until the presidential election, Pence outlined more concrete ideas for rebuilding the economy and increasing the United State’s global competitiveness.

“Donald Trump has a plan. He has a plan to reignite the American economy,” Pence said.

Pence mentioned trade reform, regulatory reform and cutting taxes across the board for businesses as just some of the solutions. He explained how dissatisfied he is with the current level of spending and urged attendees to fight against more taxes, more regulation, more spending and the continued war on energy, which Democratic opponent Hillary Clinton proposes.

“You and I know better. This is not the best we can do,” he said, regarding the economy.

If Trump were elected president, Pence promised the audience that he would, “lower taxes on American businesses so they can compete with businesses on a global scale." The crowd, many small business owners themselves, cheered.

Pence also criticized the United State’s current relationship with the globe, calling it “weak.” He reiterated Trump’s ongoing promise to rebuild the American military force and “lead on the world stage with American strength.”

Rally attendee Phillip Reeb, 22, said it is this strong stance on U.S. military support that drew him to support the campaign.

Pence also continued Trump's vow to end illegal immigration by building a wall on the U.S.-Mexico border and forcing undocumented citizens out, another stance that was met by excitement from the audience.

An emphasis was also placed on the importance of who becomes the next Supreme Court justice.

“We’re going to elect a president for the next four years, but the election will define the Supreme Court of the United States for the next 40 years,” Pence said.

A firm pro-life supporter, Pence said the current members have “unaccountable power to make unconstitutional decisions,” alluding to their recent ruling on the Texas abortion law.

In a closing statement with emphasis on the American Dream, Pence described the true meaning of Trump’s famed slogan.

“He just simply knows in his hearts of hearts that you get the American government out of the way and the American people will ride the ship to make America great again,” he said.

Pence asked the audience to explain to their community members this meaning.

"American strength" and "the American Dream" were common phrases used by Pence throughout the speech. He explained his background of grandparents who worked for better future and says it is similar to Trump’s story.

Pence joked that the differences between him and his superior running mate are “a lot of zeros.”

After acknowledging this difference, the vice presidential nominee left the audience by saying, “Donald Trump and I believe that there will always be more that unites us in the United States than will ever divide us.”

Pence will continue his campaign in Sarasota, Florida, on Wednesday.