Elon begins move to Under Armour

A month in, a few 'gentle hiccups' shows strength of apparel partnership 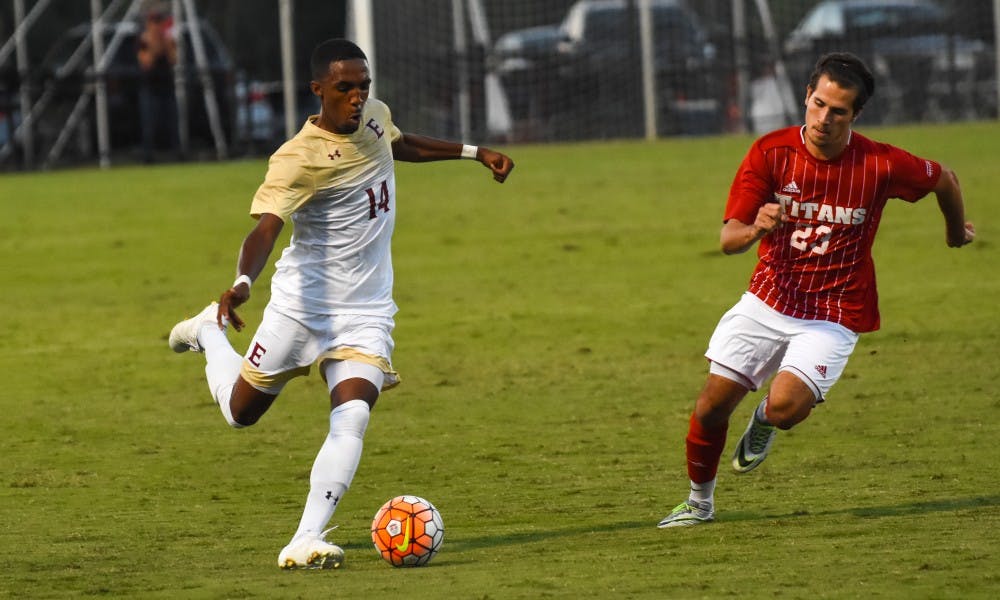 
Redshirt freshman midfielder Hassan Pinto (14) swings his foot at the ball in a match against the University of Detroit Mercy Sept. 4.

It’s been a month since the Elon University athletic teams began competition in 2016-2017, which marked the beginning of Elon’s apparel partnership with Under Armour.

And, since Elon became an Under Armour school July 1, Director of Athletics Dave Blank said that the relationship between the school and company has been great.

“They’ve been outstanding with getting the equipment that we needed,” Blank said. “I would give it an A right now. The relationship’s been really well."

But the move to the Maryland-based apparel company hasn’t been perfect. Blank described some of the issues as “gentle hiccups.”

“In trying to take your time to get everything right, you’re making a wholesale change,” Blank said. “Sizes don’t always match up. Equipment doesn’t match to what you’re used to having. So we’re having some of those [problems].”

The volleyball and men's soccer teams appear to have the biggest issues. According to Elon, Under Armour does not make volleyball shoes, so the team is wearing different shoes.

Under Armour does make soccer cleats, but the team is not currently wearing them. The majority of the team has been wearing either Nike or Adidas because of two main issues with the cleats.

Sizes haven’t matched perfectly for some, and there has been one player whose foot is larger than any shoe Under Armour initially supplied to Elon. The other issue is that the sole of the cleat cannot be removed, which is a problem for players who want to replace them with custom-made orthotic soles. The customization issue is something of which Blank is understanding.

While Elon’s contract with Under Armour is unavailable, and the company said a spokesperson is not available at this time to discuss the contract, 10 agreements signed in the past decade between Under Armour and public universities all have clauses stating that, in the case that the company’s cleats aren’t available, they can wear other cleats as long as the other company’s logos are “covered.”

Elon hasn’t done that, but Blank said that the company is aware of the other cleats and — because of the transition — doesn’t take issue with it.

“Everything we’re doing with this transition is in communication with Under Armour,” Blank said. “They know exactly what’s going on. Taking our time to transition is important, but it’s not like we’re not getting there.”

Blank hopes the transition will take only one year before full implementation, saying, “I can’t gauge a spring sport in the fall.” He also said the implementation process will happen each year with each incoming freshmen class, but appreciates Under Armour’s comprehension of that.

“You’re always going to have new athletes. It’s a situation where, ‘How do you treat that?’” Blank said. “I think that’s the importance of having a company like Under Armour that says, ‘Tell us what the concerns are, even by the individual, because we want to work through that.’

“I think, in this situation, having enough time in advance to prepare for any of those types of issues that might come up — those are the things that you don’t anticipate well enough. Now that we’ve got through that, particularly with fall sports, our transition for the next-year, first-year student-athletes can begin much earlier.”

And while some in the athletic department have been worried about the transition period, Blank firmly believes all is well.

“There’s no reason for anyone to worry about anything on this, because we are working so well with Under Armour,” Blank said. “It’s not like there’s an agenda or something to hide. I don’t get that sense from anybody — even our student-athletes. They all feel like the product is going to be great.”