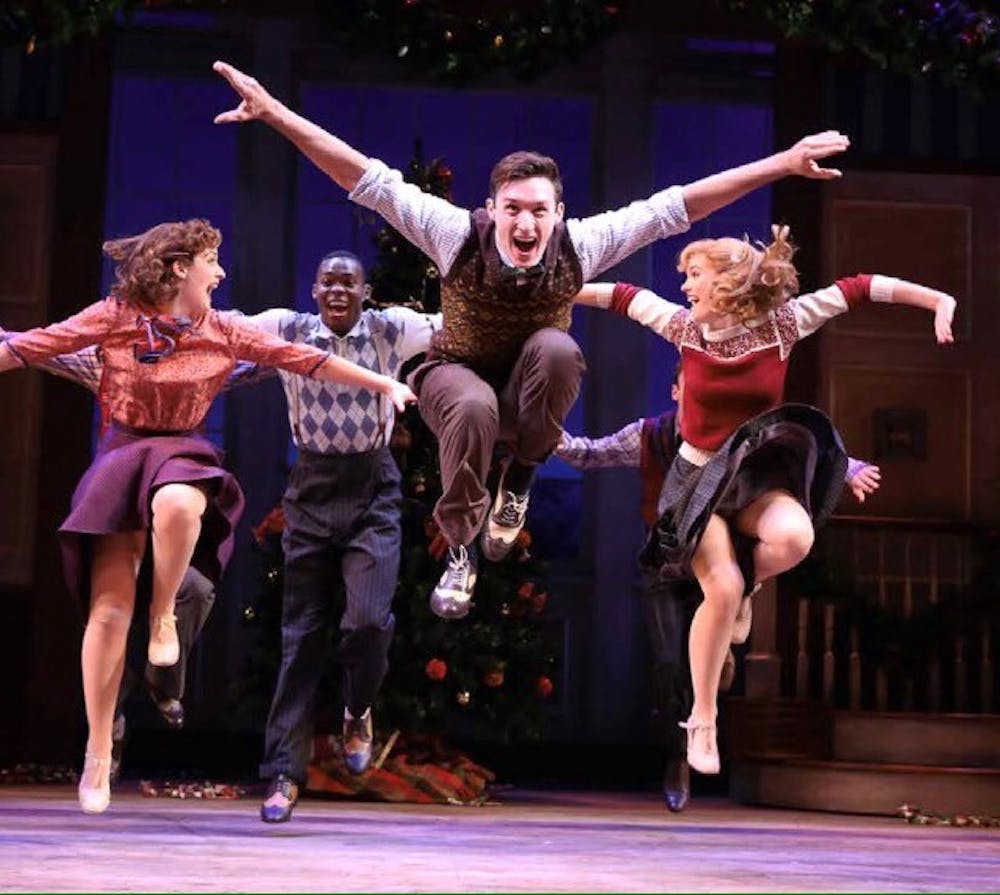 When Drew Redington, Matt Meigs and Gerald Caesar took the stage on Broadway this fall, they remembered how Elon’s music theater program prepared them for their career debut. Now Redington and Meigs are playing in the ensemble in the show "Holiday Inn," while Caesar is playing a swing, or a member of the cast who understudies several characters, in "A Bronx Tale."

“Elon has prepared me for this mostly by teaching me how to audition in New York City,” Redington said. “I think everyone comes into Elon’s musical theatre program already having the talent it takes. However, it’s the technique, heart and hours in class training that makes a whole world of difference.”

Meigs credited Elon’s faculty, saying their nurturing teaching methods and devotion to students led, in part, to his success.

“They cared about me, but also tore me down and let me know how to better myself,” he said. “They give you the tools, but it’s your choice to use them.”

Caesar agreed, and said all one needs to do is take advantage of Elon’s resources, something he did and claims most prepared him to get to where he is today.

And those training and tools certainly paid off. Redington had a three-month audition process beginning this past January, Caesar had a month-long audition process and Meigs was able to utilize past experiences to land his audition.

“After the first initial call, I was invited back by the creative team two more times — once in February and then again in March,” Redington said. “After the final callback, I received an official notice to be a part of the show in April.”

Though Caesar’s audition process was shorter than Redington's, it wasn't short of numerous callbacks.

“After graduation, I began doing summer stock in Connecticut,” Caesar said. “While on a week-long break between shows, my agent sent me in for 'A Bronx Tale.' I auditioned and got several callbacks. A month after graduation, I got the call that I got the job.”

As for Meigs, his audition process was what he called an “absolute rarity.” Though most auditions take multiple callbacks, like Redington’s and Caesar’s, Meigs was able to use past connections to fuel his chances.

“I’ve worked with the choreographer before, so I was lucky enough — and have worked hard enough — to simply come in and sing a bit of music and read a scene,” Meigs said.

For most of Redington, Meigs and Caesar’s lives, Broadway has been the end goal.

Meigs had been on Broadway prior to "Holiday Inn," making his mark in the shows "Matilda" and "Tuck Everlasting," while Redington made his career debut with "Holiday Inn" and Caesar made his with "A Bronx Tale." Now, after years of practice, all three have exceeded in meeting their goals and making their dreams tangible.

“I’ve been wanting to perform since I was little, so it has always been a goal for me to be on Broadway,” Redington said. “I am still stunned that I am here. It’s really cool that my dream has become a reality and I get to live it everyday.”

Meigs grew up in a Broadway family, and had his dreams instilled in him at a young age.

“My family all loves theatre,” he said. “My parents actually met doing a show in high school. My entire family has been in three shows together. Needless to say, I grew up in the right family.”

Noting their success, the alums continued to offer advice for future Broadway-bound Phoenixes.

Caesar, too, hopes Elon students will be kind and continue to inspire each other and create community.

“Take advantage of the resources provided by Elon and continue supporting and lifting each other up,” he said.

“Train, train, train,” he said. “Take the time – you are given at school to improve and enhance your craft. It’s so easy to get wrapped up in the world of ‘college’ that you can sometimes forget why you’re really there. Constantly be aware of your goals so that you can always have something to work for in school, but also have fun doing so.”