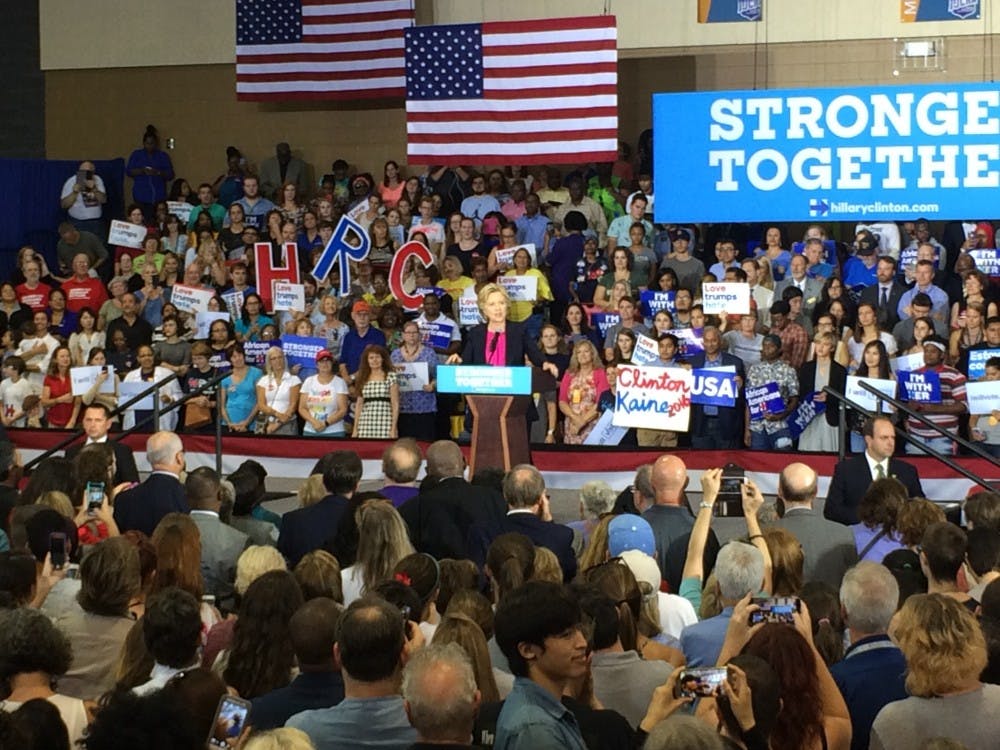 Coming off a hard-fought debate the previous night, Clinton sought to contrast her policies with those of her Republican opponent, Donald Trump, and North Carolina’s Republican leaders. With Tuesday being National Voter Registration Day, Clinton continually critiqued registration requirements she considers restrictive.

Clinton said Republican Gov. Pat McCrory and the state legislature, “did everything they could to make voting harder for people.”

The speech wasn’t without its fair share of attacks of Trump’s debate performance. Clinton criticized Trump for rooting for the housing crisis, not paying his fair share of taxes and being unprepared to debate issues of relevance to U.S. voters.

“I’ve laid out my views on a range of national security and foreign policy issues,” Clinton said. “I’ve laid out my plan for destroying and defeating ISIS. What we hear from my opponent is dangerously incoherent.”

Though Clinton spoke critically of Trump, she adopted a more personable approach in communicating her message. She shared how her mother was raised in poverty and practically abandoned by her parents. She also talked about her father starting a small drapery fabric printing business.

One of the more emotional moments occurred when Clinton said her mother’s first grade teacher provided her mother with lunches because she never had any food to eat at school. She told another story of her mother working as a maid as a teenager, noting that the employer allowed her to go to high school so long as she had finished her jobs around the house.

The purpose was to illustrate the necessity for people to be kind to one another.

"She was so often saved by the kindness of other people," Clinton said. "You know, we overlook the importance of just how we treat each other — the respect we show, the kindness, the love that we show."

Speaking to a young audience on a college campus, Clinton devoted much time to education policy.

“Let’s make sure that every educational opportunity is available without sending you into debt and breaking your budget,” Clinton said.

She added she would go into greater detail about her plan the following day during a New Hampshire campaign trip with Sen. Bernie Sanders. Clinton’s proposal for free tuition at public colleges and universities resonated with one North Carolina State University student, Kimberly Bellingham, looking to get a Ph.D. in microbiology.

“It’s not really possible to work a part-time, or even a full-time job while attending school and end up debt-free,” Bellingham said. “You spend so much of your time after college trying to dig yourself out of that debt when you should be able to form a stable foundation for your future.”

In a news release before the rally, North Carolina Republican Party chairman Robin Hayes said Clinton has, “proven time and time again that her judgment is totally flawed and that she cannot be trusted.”

As Clinton approached the end of her speech, she reminded voters there is too much at stake to sit out the election.

“This is not reality TV,” Clinton said. “This is real. It’s as real as it gets.”