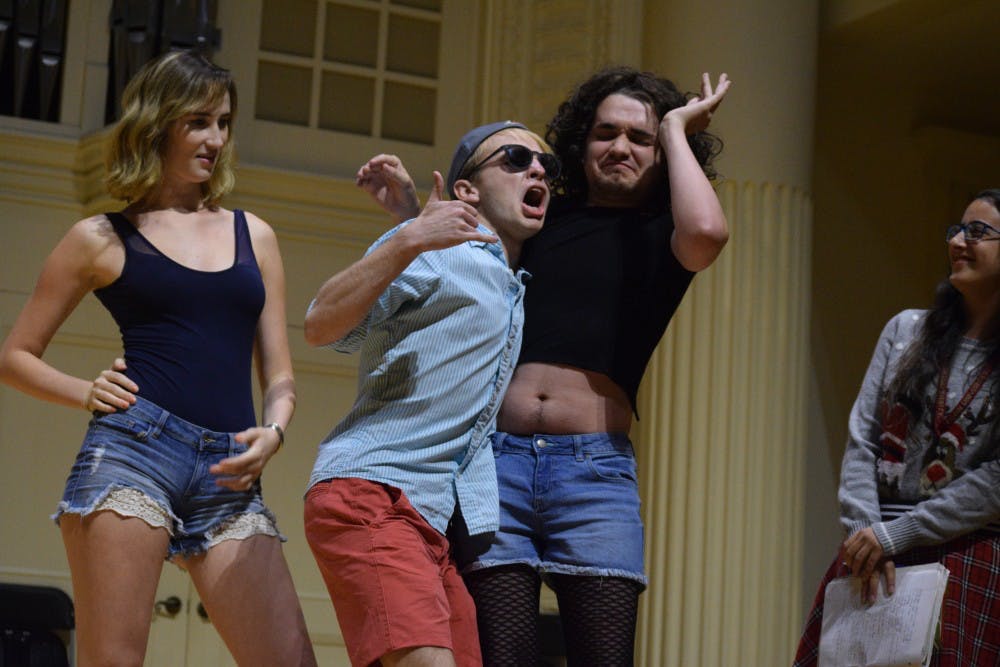 Wrapped in blankets, huddled in the lobby of the Performing Arts Center around 3 a.m. Sept. 10, juniors Genny Tankosich and Karolina Bohn put their final edits on their script for The 24 Hour Plays to be handed off to a director in approximately three hours.

They knew they were on a time crunch as their play was to be performed at 7:30 p.m. in Whitley Auditorium for The 24 Hour Plays, hosted by Alpha Psi Omega, the national theater honors society.

The writing process began at 7:30 p.m. Friday, when they picked “comedy” as their genre and a cast size of nine people out of a hat. Five other writers also picked genres and cast sizes before heading off to write and complete a script by 6 a.m.

Working together, the two bounced ideas off each other throughout the night, with ideas ranging from the seven deadly sins and new students, while still keeping it Elon-related.

To keep on track for the night ahead, Bohn and Tankosich had an idea for how the night would go.

“We’re planning a timeline,” Bohn said. “Maybe brainstorming for another five minutes or so, creating a story arch for maybe two hours and editing after that and seeing how long it takes.”

They worked until roughly midnight to evolve the basic storyline and then moved into writing the dialogue for three hours. Before crashing, they managed to edit the story before submitting it for a director
to use.

The two writers ended up creating a play titled “House Party,” which follows the TV star of “Tracking the Trumps,” Courtney Crunk, and her homely friend Pam as they mingle with different Elon residence halls, personified by actors, to decide where they want to live.

In a plot twist, the two ultimately choose West for housing.

“We’ve been playing a lot with ideas that people in the audience — no matter what their major — will know because we want them to feel like they’re in on the joke,” Tankosich said.

At 6:45 a.m., the script was passed down to senior Sarah Wright to begin the directing process.

Using headshots, the directors picked their casts one by one. Since Wright was last in line and had the largest cast size, it made it more difficult for her to cast the characters she initially wanted.

Because of this, the character Courtney was played by a male actor.

“I ended up having to fit in people and changing the gender of one character because I was last,” Wright said. “I also didn’t know a lot of the people and I was trying to pick people I did not know.”

Around 8 a.m., the nine actors and director sat in a circle in Yeager Recital Hall and began their first read-through of the play.

As the script was read, actors began experimenting with different tones and expressions while Wright scribbled notes for blocking, or the character’s placement on stage, and added additional lines where she felt it necessary.

According to Tankosich, she and Bohn tried to write in a way that would hint at where the characters needed to be on stage and make sure there were no plot holes.

Artists went to great lengths to find inspiration for poetry in a show in The 24 Hour Plays. Photo by Diego Pineda, Photo Editor.

From reading, the group moved to the stage — working on blocking, figuring out what props and costumes would be necessary for the show and trying to memorize their lines in a few short hours.

“I haven’t had much difficulty with it —usually, I have 20 lines at most,” said senior Andrew Gleckler, who acted in the play. “There are some people who have multiple monologues, and they have a tough time. It’s just luck of the draw — you never know what’s going to happen.”

This is Gleckler’s fourth time acting in The 24 Hour Plays. He said he continues to sign up because it’s different every time and very rewarding.

“I remember when I first watched them my freshman year, and I thought it was absolutely hilarious and the kind of work that it took to work on these kinds of projects, and I knew that was something I wanted to do,” Young said.

After many run-throughs on the stage in Yeager, “House Party” did their tech rehearsal in Whitley to work out a few kinks with the change in space — Wright’s biggest worry.

This is the first year that The 24 Hour Plays were performed in Whitley because it is a larger space. But it’s also known for echoes.

“My biggest worry is the transition to Whitley because we’re practicing in Yeager,” Wright said. “I know in Whitley you need to project really loudly, and the shoes make a lot of noise.”

Despite the stress and quick turn-around, participants enjoyed the experience and were happy with the end result.

“The experience has been hilarious,” Young said. “I think I really like the people I’m working with, and we’ve already had so many laughs together. Also just the idea of having satire about Elon is something that is easy to relate to.”

After a long and stressful day of writing, directing and rehearsing, six different shows were performed at 7:30 p.m. Saturday in Whitley.

Shows ranged from poets going to extreme lengths to be inspired to King Arthur’s first drag show, each about 10 minutes long.

On Friday, none of these plays existed.

“It’s just like this unique experience with theater at Elon,” Gleckler said. “It has its own culture and cult following and its just the most exciting, crazy, random thing you can experience here as an actor because you don’t know what’s going to happen every time.”