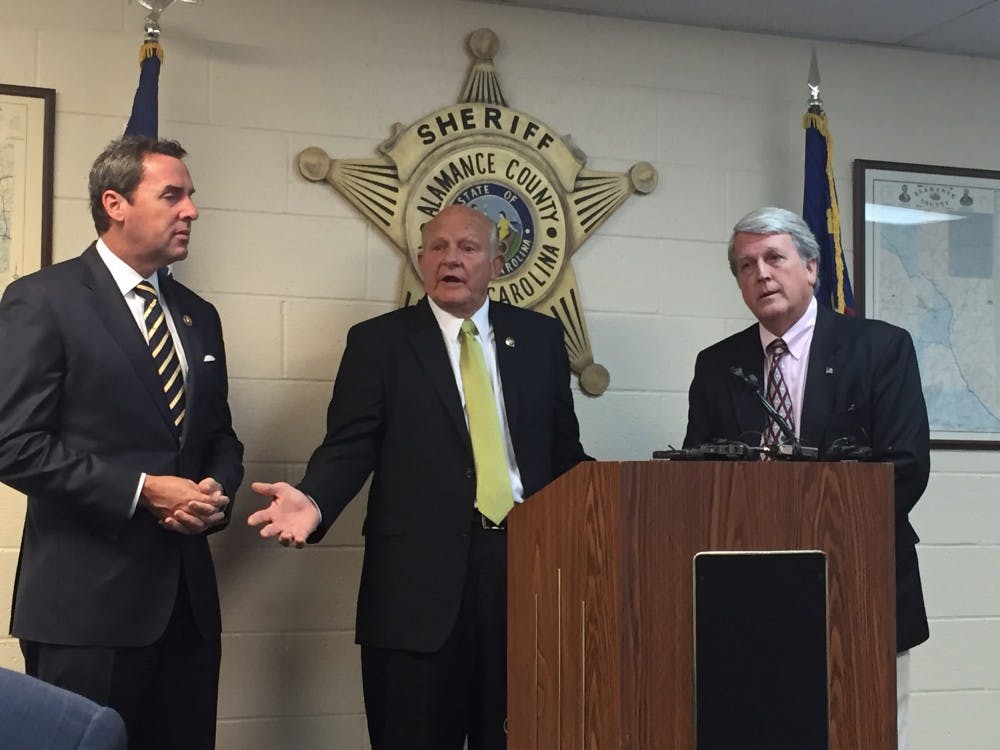 GRAHAM -- Sheriff Terry Johnson and the Alamance County Sheriff's Office held a news conference Friday to speak publicly about the settlement reached that led the Department of Justice to drop its lawsuit against the Office.

Almost a year ago, Federal Judge Thomas Schroeder released a 253-page document dismissing the federal lawsuit against the department, which the DOJ initially appealed.

"It feels like a million pounds has been lifted off me, it has restored my faith," Johnson said.

The lawsuit began in December of 2012 Sheriff Johnson and his office were accused of racially profiling and targeting Latinos since 2007. The DOJ claimed that he and fellow law enforcement officers deprived Latinos of their Fourth and Fourteenth Amendment rights. In September 2012, the DOJ released a report claiming Latino residents were targeted for traffic stops and arrests more often than non-Latino residents.

In a former report, Elon Local News found that from January 2009 to July 2012, Alamance County police stopped roughly 1,450 Latino drivers. Of the Latinos stopped, 14 percent were arrested. This arrest rate is more than twice that of non-Latinos stopped in the same time frame (6.2 percent).

"I certainly hope that no criminal justice system is ever forced to endure what the men and women of the Alamance County Sheriff's Office has had to endure for over the last six or eight years," Johnson said.

The sheriff and county attorney said there was not a complaint that started the investigation and no evidence or named victim to bring this lawsuit about. They said that the lawsuit and investigation were "unprofessional and grossly tainted with politics."

Walker quotes the court judgment statement saying that "not a single person testified that any Alamance County Sheriff's employees carried out any alleged improper directive or otherwise violated any individuals constitutional rights."

Albright alluded to his claim that this entire investigation was not criminally focused, but instead, politically.

"The truth of that came out when we received emails through a public records request with the University of Chapel Hill. And we found out what it was about, some political, politically motivated," he said.

Albright continued later that the investigation was in an effort to get Johnson to resign or to lose the upcoming election in 2010. This has not been validated.

"As a citizen of the United States and a law enforcement officer for 45 years, I was both shocked and disappointed in the methods in which the United States Department of Justice used to bring this suit about," Sheriff Johnson said.

The methods he is referring to are the cutting off of funds used in Alamance County to protect and serve its citizens. "The tactics they used in my opinion, were deceitful. They cut off our funding for federal grants, they cut off our drug asset forfeiture money, which we use to buy equipment to protect the people of Alamance County and North Carolina," Sheriff Johnson said.

Even though the men were upset with the methods used, they stated that they cooperated with everything the DOJ asked them to do. This includes copying tens of thousands of records and even copying and sending the sheriff's hard drive.

Overall, $700,000 taxpayer dollars were used to fight this lawsuit, something that Johnson said could have been used to improve public schools in the area.

Johnson says that although his faith in the criminal justice system was tested, Judge Schroeder's decision changed his mind. "The United States has the greatest criminal justice system in the world and we should never allow the system to falter like I feel like it did in this particular case. The American people deserve better than that."

Sheriff Johnson said that he was most upset that his "officers had been labeled as villains, racists, and profilers and believes that this will hurt them if they ever want to move to a state or federal agency. He cites this as the main reason why he decided to fight the lawsuit.

Since the lawsuit, the Alamance County Sheriff's Office department has made some changes including an online complaint form that can be read, written and sent in Spanish, as recommended by the DOJ. Sheriff Johnson also boasted about the several Alamance County Sheriff's Office personnel who can speak fluent Spanish when needed and hopes to hire more. Currently, there is six personnel who can speak Spanish out of the 272 personnel currently working there. Albright added that any officer who utters a racial slur in a jail is unemployed that day, citing a recent incident with an officer in the last 11 months.

According to the U.S. Census Bureau, 11.8 percent of Alamance County is Hispanic or Latino.