"He shook up the world, now the world is better for it." 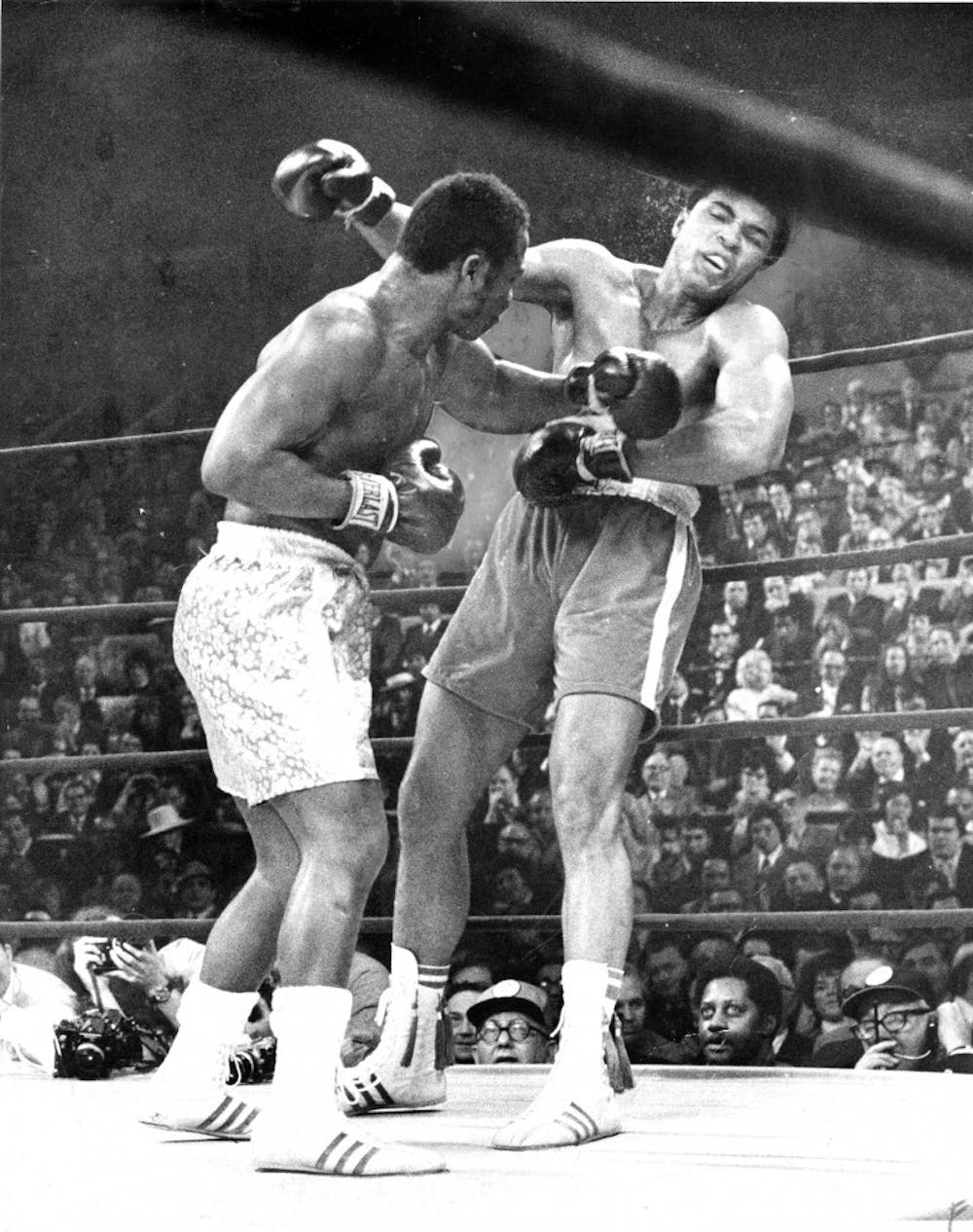 But that is irrelevant.

My parents were only 3 years old when he defeated Sony Liston for the heavyweight boxing title in 1964. I wouldn’t dare disrespect arguably the greatest sports and social icon of all time by hearkening to an instance where he directly affected me.

But legacies are infinite and influence is not bound by the pages of a calendar. Even though the prime Ali’s trailblazing journey occurred nearly a half century before my birth, his impact will unquestionably affect my future as well as the future of other college students of color, especially in light of our nation’s political and racial climate.

Honestly, I did not know much about Ali before he died. I knew he was a great boxer, but I was vastly unaware of his other pursuits and what he meant to so many people around the world. When I saw journalists from respected outlets like The New York Times, The Washington Post, and ESPN pouring out their hearts into cyberspace and on the airways over the loss of Ali last Friday, my curiosity sparked to learn more about him.

The Muhammad Ali, The Greatest Ever -- for all the right reasons -- R.I.P. There's never been anyone like you; never will be.#GodBlessYou

Stephen A. Smith, a renowned ESPN commentator and reporter, offers his sentiments towards Muhammad Ali on Twitter.

That curiosity led to me peruse piece after piece of commemoration towards the late champ, a figure whose persona and charisma eclipsed the ropes and gloves of his trade. I learned in-depth of his stellar 56-5 record, which included an epic “Rumble” against George Foreman, a man whose only recognition for many in my generation spawns from his trademark grill rather than his boxing career.

But the bulk of Ali’s stamp on America’s culture––if not the global culture-––-can’t be gleaned from a mere glance on a fight card.

In the NBA Finals press conference before Game 2, LeBron James said Ali “paved the way for guys like myself.” Stephen Curry — whom I consider a hometown hero for his ties to Charlotte — said Ali was “the example of how to use your platform and speak what you believe no matter what people say.” It’s not a secret that professional athletes are placed on a pedestal to influence those who look up to them. Ask my barber which New York Giants wide receiver’s exotic haircut I show him a picture of every time I need a fresh lineup. But in Ali’s case, he inspired his contemporaries and the generations subsequent to do more than curl their hair and dye it caramel blond.

He proved you can be successful by being yourself — even in the midst of unimaginable adversity.

Shortly after he snatched Liston’s heavyweight crown (as a 7-1 underdog), the then-Cassius Clay swapped the Christian cross for a Muslim crescent, converting to the Nation of Islam and changed his name to Muhammad Ali. This caused uproar in the mostly white media, who refused to call him by his preferred name and instead dubbed him the “Louisville Lip.” When even opponents denied to address him as Ali, he used it as fuel to punish them, even barking, “Say my name!” in the ring while he mercilessly and methodically pounded them. In the darkest time of segregation and civil disparity for African-Americans in U.S. history, he refused to let the oppressing culture define him.

He was the first black person to ever proclaim his greatness. He wouldn’t accept anything less.

He used that same perspective when he notoriously and conscientiously dodged the Vietnam War draft. Out of reverence for his peaceful religious views and opposition for shooting a Viet Cong soldier because, “they ain’t ever call [him] n*****,” Ali argued he would suffer the consequences rather than fight a war he didn’t believe in. He rejected the notion jeopardizing his own life or taking  another man’s in the name of “American freedom” — something black people were forbidden to enjoy. Because of Ali’s defiance, he was ordered to five years in prison and was stripped of his title. He never served his term, but was deprived of three and a half years of his athletic pinnacle while his appeal process played out. Red Smith, exalted as one of the best sports columnists of the twentieth century, wrote:

“Squealing over the possibility that the military may call him up, Cassius makes himself as sorry a spectacle as those unwashed punks who picket and demonstrate against the war.”

Decades after Ali’s rebellion, I am glad he made himself a “sorry spectacle” and aspire to be half of the spectacle he was.

The New York Times remembers the life of Muhammad Ali and what he accomplished.

Before I stepped foot on Elon University's campus last August, I was seemingly negligent and ignorant of the plight of today’s African-Americans. I was raised in the suburbs of an emerging metropolitan city and graduated with only five other black classmates in a small, private school. My whole life has been engulfed in a majority white environment, so it made my transition to a predominantly white institution painless. When I heard other freshman black Elon students were having trouble assimilating to their surroundings, I was unable to relate. But when a white student had the audacity to exclaim his reservations of having Kenneth Brown as our class president because he was black, my eyes were opened the local and national racial epidemic. What I saw was chilling.

My race is literally in crying for help.

I’ve grown up in a culture where every six months, it’s not outlandish to predict there will be another hashtag seeking justice for another one of my African-American brothers whose life was taken too short and another cold-blooded murder got off too easy. I was raised in a system where I had to investigate as if I’m Sherlock Holmes to find stories about the 69 shootings that occurred in Chicago over Memorial Day Weekend while the death of a gorilla was plastered over every reputable news agency, inadvertently implying that this senseless violence doesn’t garner enough importance for the public to know or care about. I was bred in a society where there is so much unrest and protest, streets and college campuses in Missouri are virtually transformed into war zones. I was embedded into a civilization where I’m constantly asked when I will cut my hair to a traditional style because “apparently” I will not get a job or internship if I don’t look like everybody else.

Eerily, I’ve grown up in an era that parallels Ali’s, which makes him a paradigm. If he can trek a similar, treacherous society without losing himself in the wake, than so can I and other black college students.

LeBorn James and the Miami Heat pay tribute to Trayvon Martin, an unarmed African-American who was shot and killed while wearing a hoodie.

With so much negativity — mostly unwarranted but some self-inflicted — associated with African-Americans, it is easily more palpable to migrate away from our roots. That is especially true for black students at Elon, who may feel uncomfortable and want to morph into the crowd because we are in the vast minority as only six percent of Elon's population. But that’s not what Ali did and he set an unrivaled example for myself and other college students of color to follow. He refused to allow the “superior”culture to dictate his destiny. He held fast to his beliefs and spit adversity in the face, even when relinquishing what he stood for could have erased a lifetime of burden.

When final exams were over last month, I went to Chapel Hill to have lunch with C.L. Brown, a college basketball reporter for ESPN.com. As a 19-year-old kid trying to carve my way into an incredibly competitive and evolving field, I try to find mentors who have been in my shoes and can offer invaluable advice. When I asked him if I should apply for a position in Elon News Network — one I didn’t feel I was qualified for — he said yes without hesitation. He said being ambitious is the only way I’ll leave my mark. As the world mourns Ali’s death, I can truly appreciate C.L.’s advice more now that I see how the boxer shook up face of the world with his ambition.

Now the world is better for it.

His fortitude in the face of hardship is admirable and he exhibited how to cling on to your heritage and morals even when it’s difficult. That’s something I will definitely harbor with me heading into the fall, as I was accepted for the position I applied for and am the only African-American student journalist with a prominent title and responsibility at Elon.

When the mind is exposed to greatness, it can't conform to a lower level of thinking.

Ali’s death comes at a turbulent time in America. It seems as if prominent figures in the colored community left the spotlight in masses. The iconic Prince died this spring, Kobe Bryant shot his last shot before retirement in April, and President Obama will know his successor by the beginning of November. En route has been a process defined by prejudice and fear, with people choosing to succumb to their hesitations as they desperately seek change. Ali stands as a constant, displaying that it is possible to not be defined by your hazardous, distasteful circumstances.

"He was one of a kind."@POTUS Obama pays tribute to Muhammad Ali in Facebook video: https://t.co/vEGrVCP3jN pic.twitter.com/8PTmNI3N4t

Legacies aren’t confined to ticks on a clock. I wasn’t even a thought for conception when Ali beat Liston, but the iconic image is the centerpiece graphic of one of my favorite T-Shirts. Now that I am more aware of Ali’s greatness, I have a conviction to wear his courage and determination in how I live my life, not just as an article of clothing or know him as some distant, mystic legend. Ali was before my time, but what he stood for and the fight he fought transcends time.