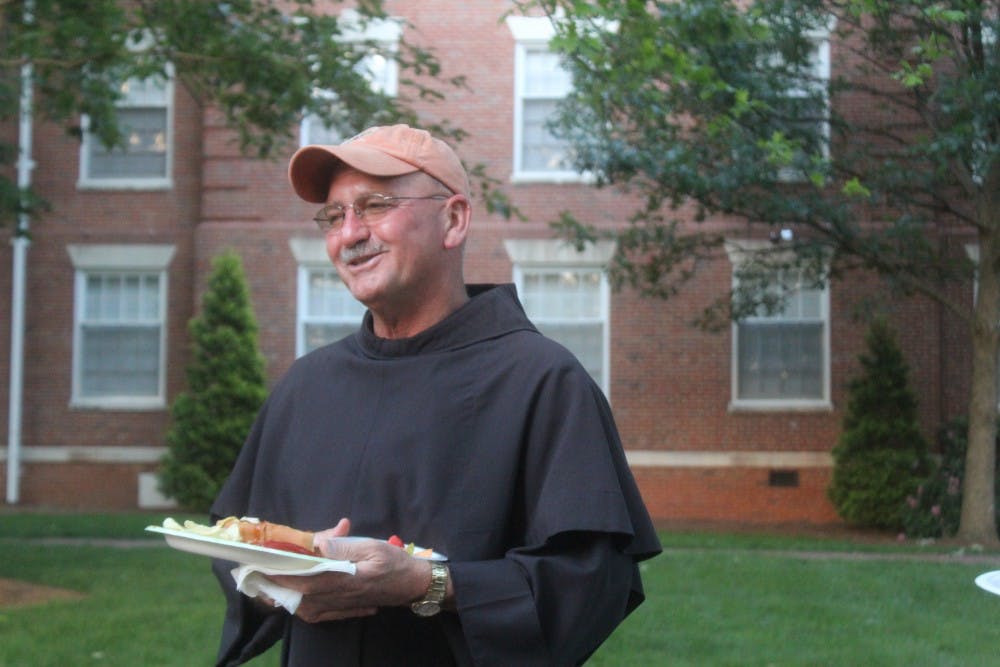 
Father Gerry Waterman enjoys some food during a goodbye picnic for him on May 8.

Speaking in front of executive members of Elon University’s Catholic Campus Ministry at an April retreat in Asheboro, Father Gerry delivered disappointing news. After 11 years of serving the local community, he announced he would leave the university at the end of the academic year to become Catholic Chaplain at Syracuse University.

“You promised that you would be here until our senior year,” said a heartbroken Amanda Corso, CCM servant leader and freshman.

“Amanda, that was certainly my will, but I believe this is God’s will,” Waterman replied.

The bond between Waterman and the students he serves is evident in the way he carries himself on campus every day. When meeting people for the first time, he asks for their first and last name and their hometown.

As he meanders across campus, he can often be spotted chatting with colleagues and students. An extroverted figure, Waterman often introduces strangers to one another in an effort to bring people together.

From leading Sunday services to offering guidance to those who ask for it, Waterman has loved working at Elon.

“He’s been such an important role model for me at Elon,” said Chelsea Semeraro, CCM president and senior. “Elon means so much to me because of Fr. Gerry. It’s hard to imagine Elon without him, but I understand that if it was his choice, he’d stay here.”

Getting the phone call

Though Waterman ultimately decided to make the transition to Syracuse, he said he did not want to leave Elon. Waterman’s provincial superior, the same person who handed him an airplane ticket to visit Elon in 2005, called him on Feb. 5 to see if he would be willing to consider being the new Syracuse Catholic Chaplain.

Waterman received the phone call in the middle of an auction function at Blessed Sacrament School and was immediately skeptical of the idea of working at Syracuse. He was happy at Elon and enjoyed his work with the university. Considering a move to Syracuse filled him with much anxiety, forcing him to have many sleepless nights.

“I kind of put it out of my mind,” Waterman said. “I was happy here, and I didn’t want to give it too much thought. But it pervaded my whole being. I was probably sleeping about three hours a night.”

His gut instinct was to say to decline the offer. Having served as pastor at Sacred Heart Jesus Parish in Danbury, Connecticut, before coming to Elon, Waterman had no desire to return to the chilly East Coast. Sensing an obligation to at least visit the place that was interested in hiring him, Waterman planned a four-day trip to Syracuse in April.

“I heard God saying, ‘This is really what you need to look at, and you need to look at it well,’” Waterman said. “So I planned a trip. I said if I’m going to do my due diligence, I need to see what I’m refusing. My heart said, ‘No, no, no.’ My head said ‘no.’ But I have to see it with my own eyes.”

What happened in Syracuse was what Waterman calls a “God incidence.”

The two students who gave him a tour at Syracuse were former altar servers while he was a pastor in Connecticut. This was a sign.

On a Tuesday evening, Waterman’s second day of his four-day trip, he found himself penning his refusal. When he went to bed that night, he said he would need a major sign from God the following morning to have a change of heart.

The next morning, he met with the chancellor and the episcopal vicar for the Diocese of Syracuse.

“Father, you could probably rest on your laurels for the next few years at Elon University,” the chancellor said. “But I offer you a challenge — probably the same challenge you faced when you went to Elon 11 years ago. I believe that God has work for you to do here.”

Waterman said the chancellor convinced him to change his mind. When Waterman walked out of the office, he decided he would accept the position.

“Once I said ‘yes,’ I started to sleep my regular six hours a night without interruption, and I felt totally at peace,” Waterman said.

It is difficult to condense the 11-year impact of a prominent figure within the Elon community. But one place to start is to reflect on the memorable moments through the voices of those Waterman has touched.

University Chaplain Jan Fuller shared some memories that stand out to her when thinking about Waterman’s legacy.

On March 16, 2015, freshman Gabriela Rosales was in critical condition after a car hit her on North Williamson Avenue. Surgeons weren’t sure if she would survive the night.

Nearly five months after the incident, Rosales visited Elon’s campus for the first time since the car struck her.

“She is a member of the Catholic community,” Fuller said. “Fr. Gerry and I tag teamed on spending time with her at the hospital. I have in my mind a series of pictures. Every time he was with Gabby, he would get a picture of her or her family.”

Fuller said this experience reflects Waterman’s love for taking pictures of the students he is with.

Winemaking and tasting a major passion

Waterman’s love for wine is infectious.

Fuller told a story about a dinner party she had at her house with staff members. A major wine aficionado, Waterman decided to bring his own fine piece of wine to share with the group. Fuller remembers how she and her staff members enjoyed sampling the different wines people brought. But it was Waterman’s that was the group’s favorite.

Elon President Leo Lambert said Waterman helped him become a wine fan as well. From time to time, they met up with one another to share a bottle.

“He’s been a good personal friend of mine,” Lambert said. “We happen to both like wine. Fr. Gerry and I would occasionally get together to share a bottle at The Oak House. I’m really going to miss that because he’s taught me a lot about wine over the last several years.”

When all is said done, it is the students Waterman has touched the most.

A memory that stands to her is a new tradition formed with Waterman of going to The Oak House for a Bible study over wine with fellow CCM members.

“For any CCM member that’s over 21, we have what’s called the Upper Room,” Robertson said. “We’ll meet one to three times a semester, go to the Oak House and we’ll all get a glass of wine and have a theological discussion together. It’s just one of my favorite things that we’ve done.”

Acceptance at cornerstone of Waterman’s legacy

Waterman has had a major influence in the Catholic community. He’s made concerted efforts to be accessible to those seeking his advice. He’s also worked to increase student engagement in on-campus service.

But it is his openness and acceptance of multiple faiths that distinguishes from others.

“While he’s built a strong Catholic Campus Ministry, he’s also been a great partner in our multi-faith initiative,” Lambert said. “He’s been a great colleague with our friends in Protestant Life, Jewish Life and Muslim Life. He’s been a real team player.”

According to Waterman, it is important to embrace students regardless of their religious affiliation or level of participation.

He said he occasionally sees students around campus approach him and apologize if they haven’t attended church regularly.

“What happens when I go through campus sometimes is a student who maybe I haven’t seen in months in church says, ‘Oh Father, I meant to come to church,’” Waterman said. “And I say, ‘Wait a minute, I’m not your parents. I’m not your judge. I’m the welcome wagon.’”

“‘I want you to know that if you ever do come, you feel welcomed. I’m going to put my arms around you.’ That’s what it’s about.”

Semeraro said she has witnessed that acceptance since she joined CCM.

“He doesn’t make you feel guilty,” Semeraro said. “He’s there to help you.”

As Waterman prepares to assume his new role at Syracuse, he grows emotional at the thought of leaving Elon.

Since making the announcement in late April, he has been flooded with emails and warm wishes from students and colleagues.

“I did my Ph.D. at Syracuse, and I know he’s going to do really well,” Lambert said. “It’s a great university and I think they have a wonderful new chancellor up there. We’re going to miss him terribly. But I’ve warned Fr. Gerry to get ready for 60 days of sun and a winter that goes until the end of April.”

Though Fuller is sad to see Waterman go, she is also confident he will succeed at Syracuse.

“We wish him wonderful years at Syracuse,” Fuller said. “He’s clearly the one who’s able to go there and heal the wounds of the community there that lost their chaplain. He has the strength and joy to do what needs to be done there, and we wish him many wonderful, wonderful blessed years.”

Referring to himself as “nobody,” Waterman insists he is just one person walking the same journey as everybody else in the world.

He said he will be the same person going into Syracuse and looks forward to the experiences that lie ahead.

“I hope it comes across how much I love Elon, how much Elon is going to be a part of me forever,” Waterman said. “It’s never going to leave me. I may be taking on orange, but maroon and gold is what I’ll bleed for a while.”