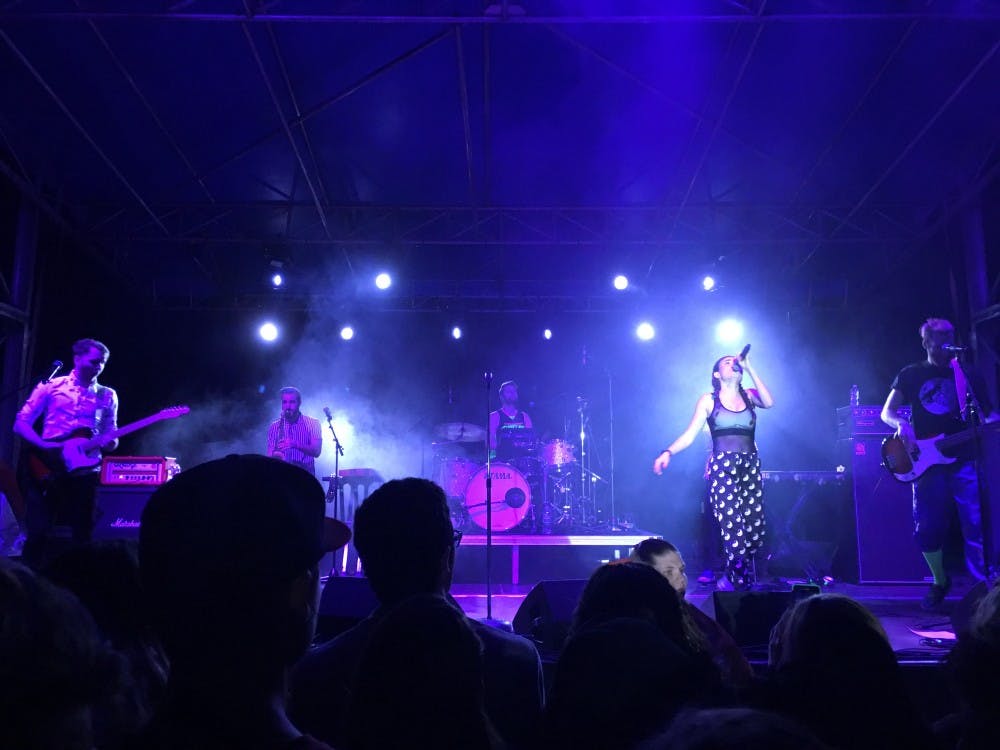 An alternative-indie vibe blasted from the Colonnades parking lot as MisterWives performed at Elon University's Spring Concert May 6.

Though Elon is notorious for bringing rappers to headline shows such as Ludacris and B.o.B, about 2,000 students were packed in the parking lot grooving along to the music.

Doors opened at 7 p.m. for the concert, sponsored by Student Union Board (SUB) and SGA. SUB and SGA created a tailgating experience for those who arrived early by offering free Smitty's Homemade Ice Cream, Pelicans SnoBalls and Soomsoom Pita Pockets food truck, as well as photo booths, corn hole, WSOE music and a beer garden.

At 8 p.m. Elon's student band, The Jeebs, opened the show with a roster of two original songs and three covers including "My Type" by Saint Motel and "Twist and Shout" by the Beatles.

The band, which was established in fall 2014 by Ian Brady '15 and senior lead singer Brett Levengood, has acquired new members throughout the years, including seniors Garret Moore and Carter Newman, juniors Miles Busby, Carey Bina and Josh Scorvern, and Julio Dragonetti through jamming and finding each other at gigs.

Together, The Jeebs has taken an alternative twist on various covers, fitting in with MisterWives' vibe.

"[Our sound] is very blues-y," Levengood said. "What we do is we have a couple originals, but mainly what we've been doing all year is our take on popular songs and it always ends up being 10-minute versions of old popular rock songs."

The Jeebs have played all around the university at the PARC opening, The Oak House and private parties, but this is their largest venue -- and crowd -- yet. The group joked they were the actual spring concert, and MisterWives was closing for them.

To get the gig, Dragonetti approached SUB asking if they needed an opener. After seeing students open for other SUB events, such as senior Rebecca Hurd opening for Saturday Night Live comedian Colin Jost earlier this spring, he thought they would be able to too.

"I saw MisterWives was the show and they needed an opener," Dragonetti said. "I saw them in Philly last year and I remember having a good time and I thought, oh it'd be cool to open. If a student opened for [Colin Jost], why can't we open for this?"

According to junior Taylor Obzud, SUB performance chair, they sent a recording of The Jeebs to MisterWives to get the opening act approved.

After taking the stage, The Jeebs performed for 30 minutes, pumping up the crowd for the anticipated headliners.

At 9 p.m. MisterWives took the stage, beginning with "Best I Can Do" from their latest album.

Through the concert, lead singer Mandy Lee made a few political statements in regards to equality and the upcoming presidential election.

"We live in a world where love trumps hate," Lee said to the crowd, referencing to Donald Trump before performing "Hurricane." "We will not allow a racist, homophobic, misogynistic president."

Lee also gave motivational speeches, reminding students to not give up their dreams or feel the need to conform to society's standards.

MisterWives is working on their second album and performed a new song from the album, entitled "Chasing This." But it wasn't until the end of the concert that they played their more well-known songs, "Reflections" and ended with "Our Own House," having the entire crowd sing along.

Though not as well-recognized as past concerts, the band captivated the audience, keeping them entertained throughout the night.

"I like [MisterWives'] music," Dragonetti said. "I think they're much better live, which is especially good for people who don't really listen to them."

This story was contributed to by Courtney Campbell