2017 shows record number of students away from campus 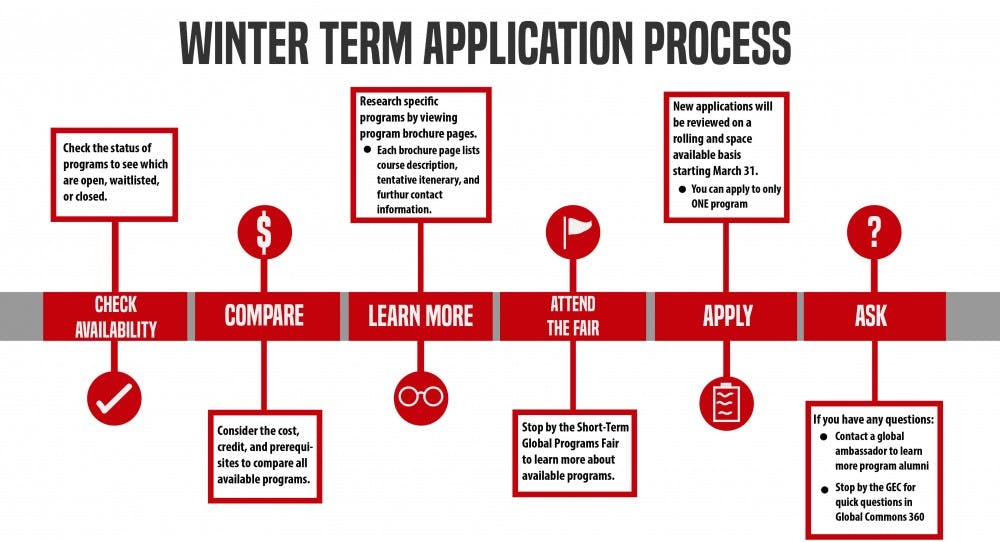 Six hundred students received notification of their abroad application status for global engagement during Winter Term this past week. Of those 600, only 100 were waitlisted for their program of choice. With Winter Term 2016 bringing in record numbers of enrollment for short-term Study Abroad and Study USA programs, students and staff consider varying factors in the admission process.

This past January, more than 1,100 students spent the month in different places around the world, due in largely because of an expansion in domestic and international programs. This year, the Global Education Center is offering 36 programs ranging in cost from $1,600 to $8,100.

Since these costs are an addition to the price of fall semester tuition and fees, Assistant Director of Study Abroad Shanna Van Beek said Winter Term is often not the most cost-effective way to participate in global engagement.

“I don’t think cost is the most motivating factor,” Van Beek said on students’ process of choosing programs. “For some students it is, but many times they could spend the same amount for a full-semester program.”

For those who do require aid, the Global Education Center offers access scholarships, which awards need-based aid. Van Beek says this is the best opportunity for students to receive funding, as there are less outside scholarships available to grant aid for short-term study programs.

Aside from cost, students consider programs based on their interests and academic and career goals. Some programs have more involved applications, and Van Beek says this is intentional. For example, South Africa is a particularly well-liked program gaining popularity through what Van Beek called “word-of-mouth momentum,” but its application requires an extra essay question.

Every program offers something different. South Africa’s added service-learning component can be draining, which is why the program’s faculty, along with the Global Education Center, decided the extra question was necessary. Van Beek says the staff wanted to make sure students were considering the impact of the experience and wanted to determine their “readiness” for the service. Essentially, that’s what all the applications are aimed at ascertaining.

Freshman Katie Wyatt will be participating in her first study abroad experience in Africa next Winter Term. Wyatt was accepted to the “Malawi: Warm Heart of Africa” program, which also has a hands-on community-based component specifically for education majors. She said while she considered the cultural differences and hands-on experience may be taxing, the program offered what was best for her specifically as an education major.

For Wyatt, cost was also a factor.

“Cost definitely played a role for me. My parents want me to go abroad at some time and they were originally concerned with the cost of the program, but we also agreed the experience was definitely worth it.”

Wyatt was also lucky enough to be placed in her top-choice program. With taking various factors into account, the majority of the students who applied during the priority deadline were placed in their program of choice.

Van Beek explains that the admission procedure comes from a mandate from the university to “provide 100 percent access to global engagement.”

In reviewing applicants, a main factor in the decision process is whether the student has already had global experience and studied abroad before, and if they will have the opportunity to do so before they graduate. After that, factors such as GPA and individual application answers are taken into account.

If a student is wait listed from their first program choice during the priority period, they are given the opportunity to change to another program with openings as long as it is within a two-day period. Many programs still have openings and are now accepting applications on a rolling basis.