Kicking it in San Antonio 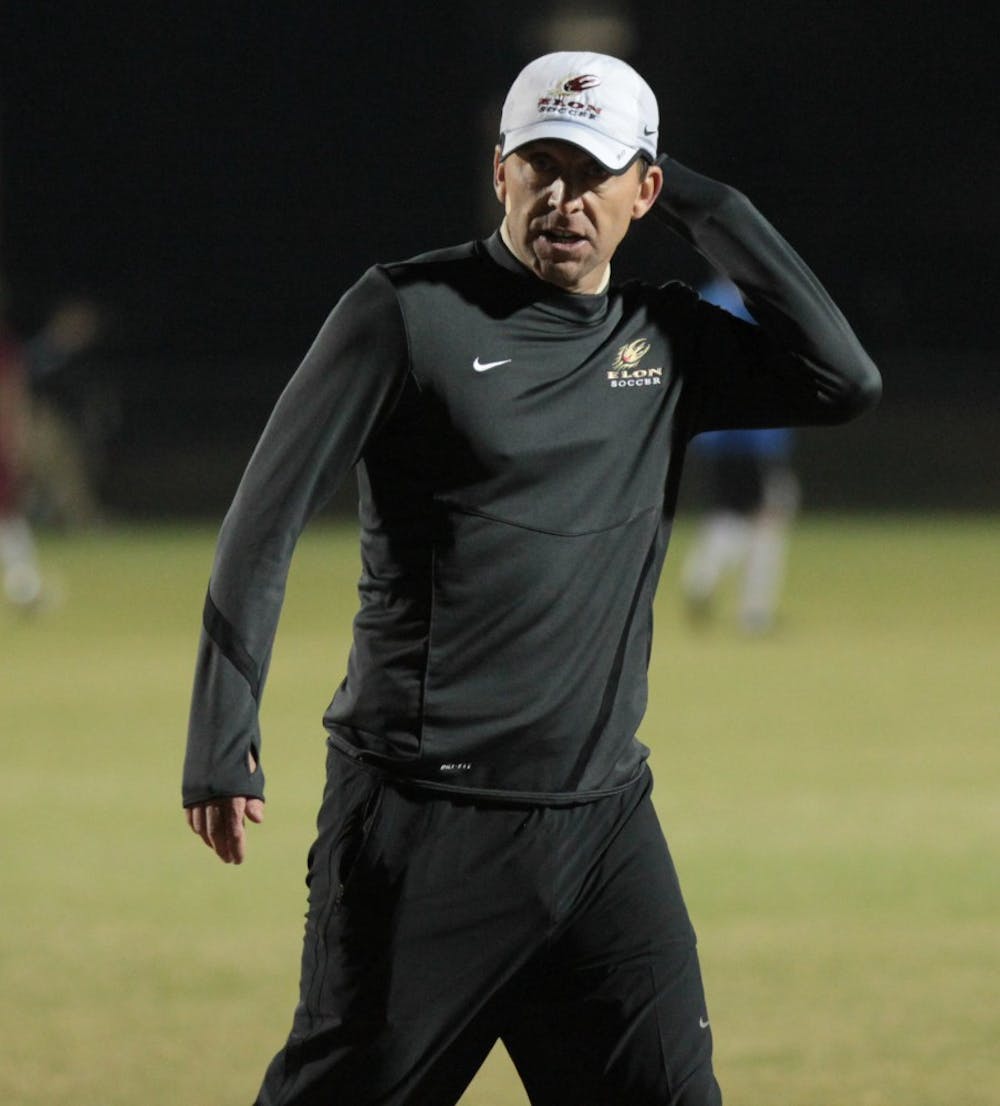 “It was a no-brainer to play here,” Dunker said. “It’s a dream come true to play for him again.”

Dunker and McBride have each known Powell for more than a decade. The two started playing for the Greensboro Soccer Club, which Powell helped run, from a young age.

“That’s the exciting thing for me — to see them develop, see them grow and sharing that journey with them,” Powell said.

Powell coached Dunker for his first three years and McBride and Salazar through their first two years at Elon before leaving to head up the Orlando City SC youth academy. In his final season with the Phoenix in 2013, Powell took Elon to its first ever appearance in the second round of the NCAA Tournament after a dramatic victory over Clemson University in a penalty shootout in the opening round.

McBride said he has stayed in touch with Powell since he left Elon. Now reunited, McBride said Powell has matured a bit, but he still sees the same energetic coach on the sidelines.

“We go out there at 8:45 in the morning. Most of us are yawning and kind of tired, and he’s out there ready to go, clapping his hands and can’t wait to get started with training every day,” McBride said.

He said one of Powell’s best qualities is his pragmatism and his ability to change tactics for whichever situation he’s thrown into.

Though, McBride expects the team to play true to Powell’s philosophy of attacking soccer and putting opponents on the back foot.

Elon Director of Athletics Dave Blank was sad to see Powell leave for Orlando City, but he knew the coaching in the professional ranks was always a career objective for him.

“When you’re driven like that on a specific goal, the trick to that is to learn that level as best you can,” Blank said. “Darren did a great job with his network of knowing who he needed to know and how to get into the major leagues from the college level, so he was ready when the call came. But more importantly, the other end of the phone knew who they wanted to call.”

For Powell, San Antonio is just the latest stop as he traverses the world of coaching.

“I see it as a profession,” he said. “I see it as a journey of coaching and where it all ends up, you can never tell, but you’re always striving to extend yourself and test yourself.”

McBride said the opportunity to sign with San Antonio without having to go tryout was a major factor in signing with the club. He said some clubs had expressed interest in taking a look at him for a brief tryout, but McBride said he was looking for something more promising.

“I didn’t want to be traveling around the country trying to go to different tryouts,” he said. “I wanted to sign with a team right away.”

Powell had reached out to McBride soon after he was hired. He told McBride he would be the third choice center back — if one of the two starting central defenders got injured, McBride would be the next man up.

“I drove down to San Antonio, 22 hours, met up with Darren the first or second day I got here and we reconnected just like we were at Elon, or when I was a little kid,” he said.

Dunker took a more circuitous route to San Antonio. After playing for the Seattle Sounders’ team in the Professional Development League (PDL), Dunker picked up an injury, forcing him out of action. With the help of a former teammate, Dunker was set up with Soccer Smart, a recruiting agency which helps place players with clubs in Australia, the United States, the United Kingdom and Gibraltar.

Dunker said he was always intrigued by the opportunity of living and playing in Australia. He had been negotiating with a club, and the two came to a mutual understanding that Dunker would get himself down to Australia where they would then finalize the details of the contract.

Then there was a slight change of plan.

“Everything was set. I had my flight, my visa and everything,” Dunker said. “Darren had gotten the job a few days before he had called me. Five days before I was leaving for Australia he called me and said, ‘Here’s the deal. The situation in San Antonio is exciting.’”

But Dunker didn’t sign when he arrived in San Antonio. He had to prove his fitness and was eventually signed more than a month after McBride and Salazar.

“He came, and what he did was impress the whole coaching staff on his current form and current fitness,” Powell said. “He has some aspects that we think can be useful — maybe not in the immediate future, but certainly in the long-term.”

While the timing was near perfect, it was no coincidence. Elon head coach Chris Little, who previously served as Powell’s assistant and coached McBride and Dunker with the North Carolina Fusion academy team while they were in high school, helped convince Powell to take a look at Dunker.

Dunker had been training with Elon to regain fitness when Powell came calling.

“Darren was looking for some cover at left back and I said, ‘Look, he’s been training with us, he’s fit, he’s committed, he’s working hard, he’s desperate for the opportunity and he just wants a chance to be able to prove himself,” Little said.

Salazar was in a similar boat, unsure of where he would end up playing. Much of the debate came down to Salazar’s player status by Major League Soccer (MLS). Salazar is not a U.S. citizen, and despite having family who are, MLS classified him as an international player. With only eight international players allowed per team (excluding exceptions), Salazar’s prospects soon dried up.

While he’s had to drop down two tiers, Salazar said there are obvious benefits to playing for San Antonio. He added having Powell coach him during his early professional career is “crucial” to his long-term success.

“The main thing is gaining experience, adapting to the game and getting playing time is the most important,” Salazar said. “If you get drafted [by an MLS club], sometimes it’s harder for the rookies to get playing time.”

One concept Powell has brought with him to San Antonio is the idea of having a “family atmosphere” surrounding the club. He said it’s especially important in his new setting, with so many different players coming from drastically different backgrounds.

Part of the family atmosphere stems from the players constantly being around each other. Dunker, McBride and Salazar share an apartment close to the team’s facilities. Many of the other players also have their own places in the same complex.

Salazar said the set up was similar to when he was a part of Real Salt Lake’s academy.

“We lived together in a residential program and just interacting with the players every day and getting to know them day-by-day is very crucial for the chemistry of the team,” he said.

McBride directed the team collectively and in small groups to come up with a pyramid of team goals. He said at the bottom of the pyramid are “buzzwords,” or words they want to describe the team and how they play, and “character goals,” which come from the Spurs Sports and Entertainment organization, who own the club.

Regardless of where Elon’s triumvirate of players end up after their inaugural season, Little says they all have the skills needed to sustain a professional career at the highest levels.

“They all have the ability and potential to be MLS players,” he said. “That’s easier said than done, and sometimes you need luck. You need to stay injury-free, performing well at the right time and I think at their age the key thing is to get an opportunity and to get games.”