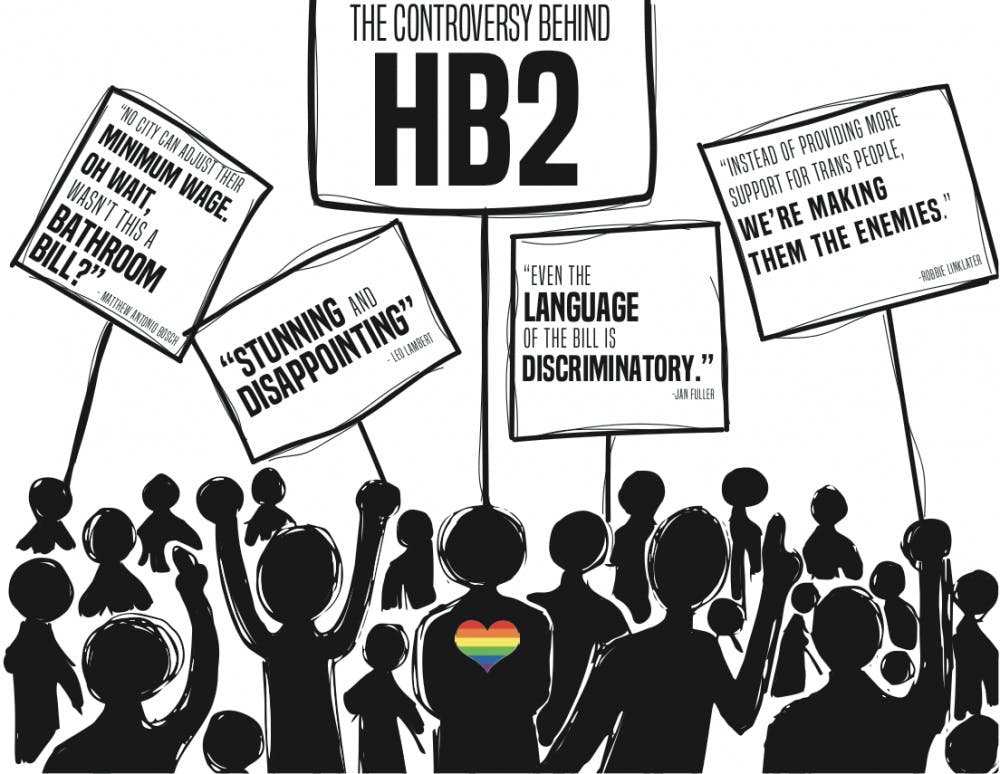 
Since the passage of House Bill 2 on March 23, the Elon University community has expressed significant backlash.

As students and faculty walked past restrooms on Monday, they saw signs taped on restroom doors throughout campus expressing backlash against House Bill 2 — a bill passed by the state legislature that, among many things, requires people to use restrooms of the sex on their birth certificate.

“We’re hoping that the signs draw more attention to the issues that are present in our community,” said Robbie Linklater, a senior at Elon University who identifies with the LGBTQIA community.

After the bill, viewed as discriminatory, was passed March 23, several members of the Elon community along with people around the country immediately expressed discontent on social media through the #WeAreNotThis hashtag, used state and nationwide. But not all of the bill’s opponents used the hashtag to voice their opposition — senior Claire Lockard, for instance, sees it as a way to pass on the feeling of responsibility.

“I’m seeing a lot of reaction against the bill, but it’s often with the #WeAreNotThis hashtag,” Lockard said. “This is really distancing the people of North Carolina from our lawmakers.”

The North Carolina General Assembly’s bill was passed with bipartisan support, with an 84-25 majority in the House and a 32-0 unanimous vote in the Senate.

Lockard said ordinary citizens should hold themselves more accountable since they voted for those who supported the bill.

“While it’s true that most of us didn’t actually vote to pass this bill, most of us are responsible for voting for those lawmakers,” Lockard said.

“The bill was passed in a special session of the legislature and rushed through in just a day, ensuring that no one was able to speak out against it until it was already law,” she said.

Though the final vote reflects strong support for HB2, Jason Husser, assistant professor of political science and policy studies, explained there was heated debate on the floors of the House and Senate. The House debated the bill for three hours, and several Democratic senators left the floor in protest.

In wake of the bill’s passage, Vice President of University Communications Dan Anderson released a statement March 25 on behalf of the university.

“Elon remains committed to inclusion and equal protection for all people,” the statement read. “Elon does not discriminate based on sexual orientation or gender identity.”

After the statement was released, members of the Elon community on both sides of the issue offered criticisms of the statement.

“The Elon statement does a very similar distancing thing that the #WeAreNotThis hashtag does,” Lockard said. “We’re saying, ‘Oh, it’s OK because Elon’s private. So the bill won’t affect us because we’re not really part of this North Carolina.’ But Elon’s in North Carolina.”

Others have expressed similar criticism with regard to other aspects of Elon’s response to HB2.

In an email exchange with Media Matters for America — a politically progressive media watchdog that seeks to debunk conservative misinformation — Anderson said, “Elon University has received no reports of incidents of harassment or inappropriate behavior related to the use of restroom facilities by transgender students.”

“This bathroom predator talking point is basically a big myth that anti-LGBT groups have created,” Percelay said. “There’s no evidence behind it.”

Guerrieri said that by focusing on this bathroom “myth,” the public is missing the greater point.

“HB2 is a truly awful piece of legislation,” Guerrieri said. “It’s biased in fear, hatred and discrimination, disguised as concern for our safety. It’s been reduced to a law about keeping men out of women’s bathrooms, when, in reality, it’s a law about making it easier for discrimination to happen, in a number of different ways,” she added.

As Linklater reflected on the bill and the university’s statement, he grew emotional and said he wished Elon’s statement had specified the impact HB2 would have on the LGBTQIA community.

“Instead of providing more support for trans people, we’re making them the enemies while in all reality they are so much more likely to be harmed,” Linklater said.

In spite of these concerns — that the university weakened its response by distancing itself — a large consensus at Elon argues HB2 is discriminatory and Elon did a good job articulating the need to promote inclusivity.

Elon President Leo Lambert went a step further than the university statement by writing a letter to the editor March 31 in the Burlington Times-News, emphasizing the impact it will have on LGBTQIA citizens.

“I want to add my voice to those decrying any attempt to legislate discrimination in any form, and in the case of HB2 specifically, deny rights to LGBTQIA citizens of North Carolina,” Lambert wrote. “I have been stunned by the lack of compassion and respect for transgender North Carolinians in this debate.”

“Letting people know all the pieces of information and all the parts about the bill can help people make informed decisions,” Husser said.

Bosch added that the discussion about HB2 has ignored some important topics. Bosch expressed concern with a minimum wage clause being buried in the bill to intrude on local government.

“No city can adjust their minimum wage,” Bosch said. “Oh wait, wasn’t this a bathroom bill?”

HB2 emerged after the city of Charlotte passed an ordinance to expand nondiscrimination protection to the LGBTQIA community. Though the ordinance previously failed by a 6-5 vote, it passed Feb. 22 with a 7-4 vote.

In essence, HB2 overturned a Charlotte ordinance that would have extended protections to those in the LGBTQIA community beginning in April.

After attending the March 30 event, University Chaplain Jan Fuller said the bill created a dangerous precedent by allowing discrimination to be legislated.

“Even the language of the bill is discriminatory,” Fuller said. “It certainly opens the door for [the belief that] it’s okay to discriminate [as long as you] pay attention to your own conscience.”

Several members of Spectrum who attended the event walked away not only with a more complete understanding of the bill but also a plan to recruit Elon community members to express their opposition. The group organized a trip to an anti-HB2 rally in Greensboro April 3.

Elon University students attend a Greensboro rally on April 3 to express their opposition to House Bill 2, which passed March 23 in the state legislature. Photo courtesy of Spectrum.

Vice President of Spectrum Bella Salmon explained in a statement on behalf of Spectrum how community members can become engaged in their public opposition to HB2.

“We need Elon University to join us in making a statement,” the statement read. “We need members of Elon to take action and raise their voices against this harmful bill. You can help by contacting your state representative and joining Spectrum in their efforts to bring attention to this discriminatory bill.”

According to Lockard, HB2 sends a message to the LGBTQIA community that they are not worthy of fair treatment. She said she hopes more students will take the initiative to better educate themselves on the issue and form alliances.

“I would encourage students who are upset about the law to come to a Spectrum meeting, to see what’s going on at the GLC, to talk to their queer friends and see what they could do to support them and to pay attention to things around campus that may be challenging this bill,” she said.

There has been widespread discussion in the wake of HB2 that a court could strike it down and that parts of the bill are not enforceable. Though this is a possibility, members of the LGBTQIA community say the damage has already been done.

“I’m not sure how it’s going to be enforced, but either way, imagine yourself as a trans person,” Linklater said. “Every single time you choose to go to the bathroom, you’re looking at these two different signs. There’s the one that you feel safest using. But then there’s the other one you are legally supposed to be using. It’s a lose-lose situation.”