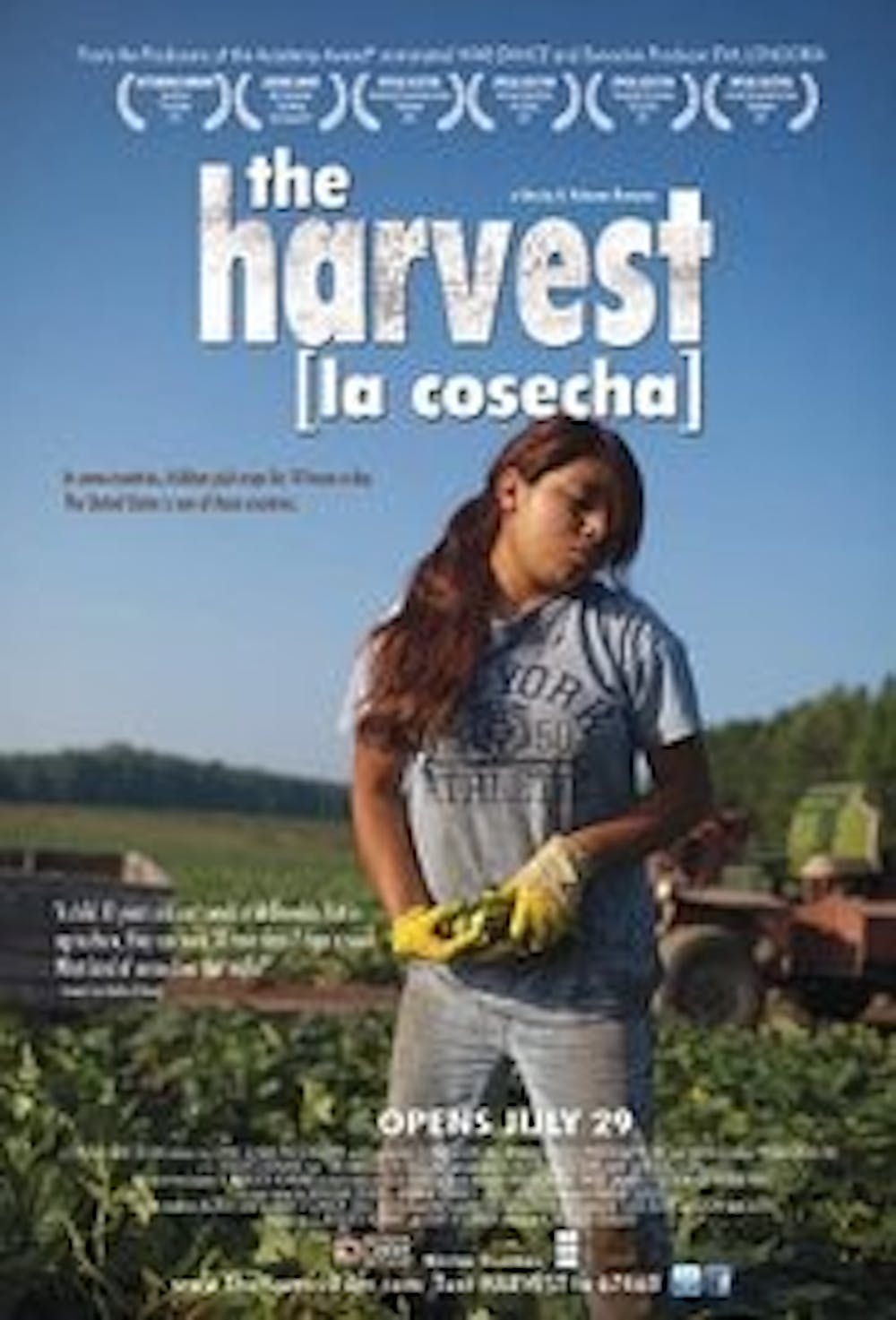 On Tuesday evening, Elon University’s Global Neighborhood film series aired its last film, “The Harvest / La Cosecha.” This year, films were held in the Global Commons Media Room and the series theme was Food: The Culture, Politics and Ethics of Eating.

This award-winning documentary explores the theme of child labor while following the lives of three migrant children who work in the agriculture industry with their parents.

Zulema, a 12-year-old migrant worker, has picked crops with her mom since she was 6 years old. Every year, she travels from Texas to Michigan to pick crops where they are in season. Victor, 16, has been picking tomatoes for eight years. He can’t quit because his family needs money to bring his two sisters to the United States legally. A 14-year-old girl, Perla, wants to grow up and be a lawyer, but she can’t manage to finish middle school because her family moves around too much.

As the documentary switches between the three stories, it is clear that all of these kids have one thing in common: they are loyal to their families and work towards a better life — but their opportunities are limited as migrant workers.

Migrant children work in 48 states across America, and around 400,000 pick the food we eat each year. At such young ages, the hard and long work days have adverse effects on their lives – migrant children drop out of school at four times the normal rate of kids. On top of this, over 300,000 farm workers will suffer from pesticide poisoning annually, including children. And an average farming family makes $17,500 a year, while the average American household brings in $32,000 a year.

When the interviewer in the documentary asked each of the three children what their dreams were, there were disheartening responses.

Zulema said, “dreams… I’m working on those,” while the other two both had high hopes of becoming something other than a migrant worker. Perla’s dream of being a lawyer was so she would one day be able to help people in her same situation.

After the documentary, there was a discussion led by Elon professor Ken Fernandez from the department of political science and policy studies.

At the beginning of the discussion, students gave their opinion and general reactions of the film. One student made the startling remark that while she was playing on a playground, these kids were picking from a field.

Students discussed how the documentary puts their own lives into perspective. Teenagers and young adults in this generation may complain about having no time to cut up their fruit in their dorm room, so instead they buy pre-cut fruit like strawberries. Watching a documentary such as this one makes this seem like a trivial issue. These children workers pick all this food, and at the end of the day do not even have access to affordable fresh produce.

Fernandez pointed out that how long you live in a certain place is a measure of success. Migrant workers like Zulema, Perla and Victor do not have the advantage of living in a permanent home, because the work they do is only available in certain places at certain times of the year. This constant moving around costs them their education and money.

The last part of the discussion focused on initiatives America could take to combat the issue of child labor. While many people feel the solution is to eliminate child labor entirely, many families rely on the income made by even its youngest members.

“If we banned child labor, some of these families would feel a pinch. There needs to be some sort of safety net,” Fernandez said.

Some U.S. citizens believe that migrant workers are stealing their jobs, but Fernandez points out that citizens don’t show up for the kinds of jobs showcased in the documentary. He believes migrant workers create an economic benefit, not a drain.

“We have done things in the past to make working safer, so clearly the government has stepped in, but policies need to be direct and sustained,” Fernandez said. “We all need to be aware of what’s going on.”