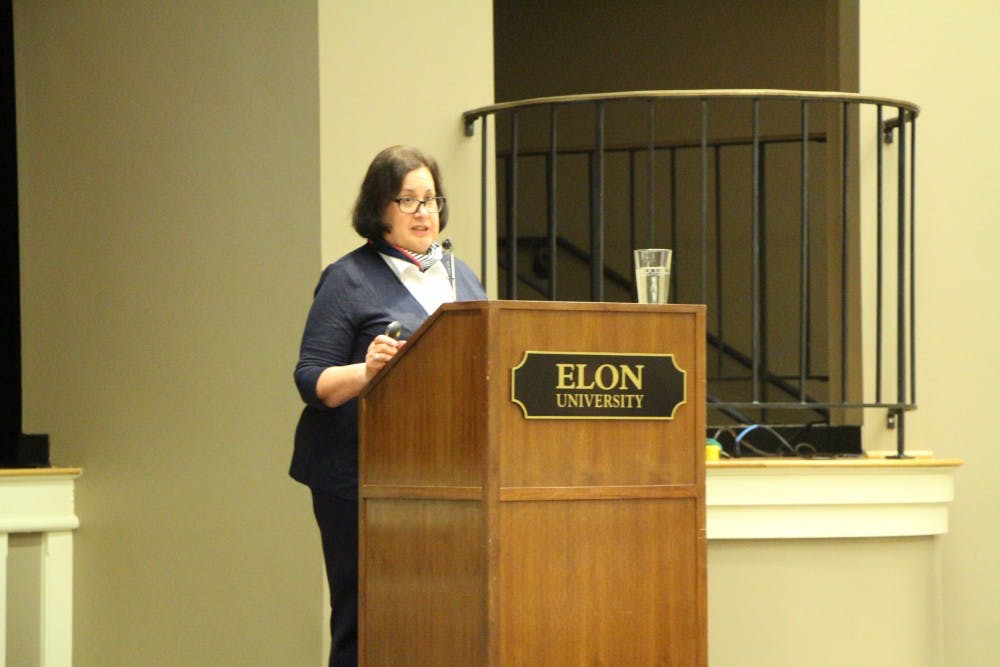 
Executive in Residence of Elon University's Love School of Business and Founding President of the Center for Climate and Energy Solutions Eileen Claussen discusses effects of climate change during April 19 lecture in McKinnon Hall.

Executive in Residence of Elon University's Love School of Business and founding President of the Center for Climate and Energy Solutions Eileen Claussen addressed a large audience at 7:30 p.m. April 19 in McKinnon Hall to share ideas about changing the way both citizens and governments view climate change.

She began her talk with an important fact: there is clear science indicating that the earth is warming.

As temperatures continuously rise and carbon-producing energy is used, solutions become more necessary to combat the issues. But little has been done to address these alarming changes. Claussen outlined the history of attempts made to cap emissions and temperature increases, calling it “a very long road” to stabilizing climate.

From the first environmental convention to address changing climate in 1992 to the 2015 United Nations Climate Change Conference in Paris, no binding limits or legal parameters have been placed on greenhouse gas emissions. The Paris agreement only instilled voluntary actions and involvement for nations, with no enforcement or penalties . Only a legal obligation to provide reports on emission levels was expected.

The Obama administration made significant efforts to reduce greenhouse gas on a national level, including the goal to achieve 26 to 28 percent gas reduction by 2025 through regulatory measures. But while this goal targets total United States emissions, states are allowed to set individualized methods of reduction. Eighteen states currently have greenhouse reduction targets, though many were implemented by executive orders of governors who are no longer in office.

Claussen pointed out that the major failure has been to enact a policy worldwide. On the previous actions taken to combat the issue, “no one can argue that it’s been a success,” she said. Her talk focused on the need to create meaningful global and national actions that broaden the efforts to address the issue of climate change.

“The gases that warm the planet can come from anywhere, and the effects can be felt everywhere," she said.

Without a viable, large-scale solution, the current climate shifts will result in more floods and droughts, as well as a general decrease in agricultural activity and food production.

Activism towards a plausible change is fueled through citizen pushback and helpful advances in technology, according to Claussen. She cited the backlash against the Keystone XL pipeline and the reduction in renewable energy costs as two cases where activism lead to advancement.

In moving forward, “future generations will be far more affected than we are,” Claussen said. She believes that solutions come from the bottom up and the top down, including governments at all levels making policy changes, businesses implementing changes in energy use and citizens being active in holding the government and businesses accountable for their environmental actions.

“All of us have a role to play,” Claussen said on actions citizens can take. She encouraged voting for candidates who prioritize climate change, intentionally investing only in companies that make solutions towards cleaner, greener futures and making wise product and lifestyle choices. Claussen said these small solutions, along with a push towards more renewable, affordable energy, will be beneficial in combating this issue of global scale.