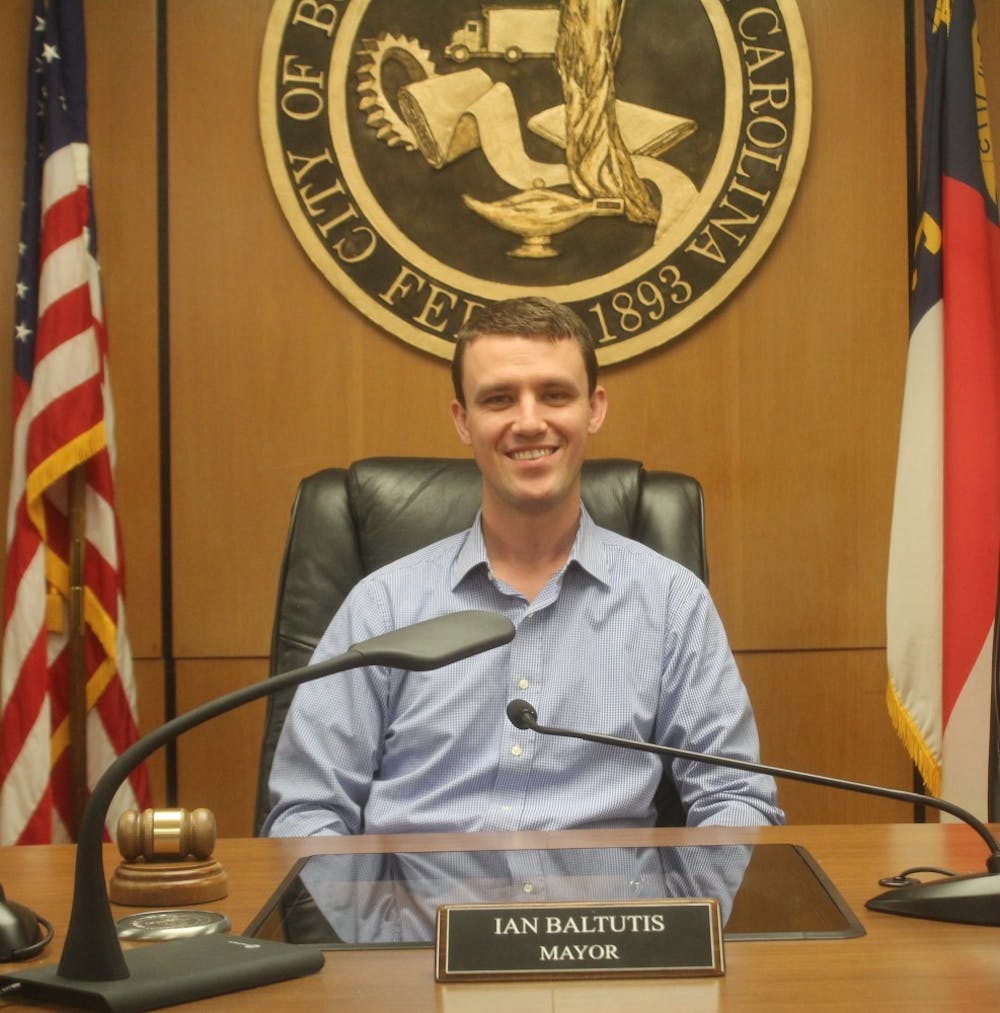 
Burlington Mayor Ian Baltutis adjusts to political career as the younger mayor in the town's history.

The weather was less than ideal on election day. Soggy roads and inclement weather led many prospective voters to stay home, hurting the 30-year-old candidate’s chances of becoming the youngest mayor on record in Burlington history.

After knocking on almost 600 doors Nov. 3, 2015, and speaking with dozens of local residents, Ian Baltutis ’08 rode in a car with his wife, Kristina, to a results after-party at Mellow Mushroom.

Baltutis had lost a couple of previous elections but was the favorite to win this time around.

“Do you want to know?” Kristina Baltuis asked Ian Baltutis while on the way to Mellow Mushroom, referencing the early voting results.

After saying, “Yes,” Ian Baltutis learned he had an early lead with a 70 percent majority against City Council member Jim Butler.

“We’re ahead — somewhere we’ve never been before,” Ian Baltutis said at the time.

First day on the job

Baltutis’ first day in office was Dec. 1, 2015, and began at City Council at 7 p.m. Leading up to his first day, he spoke with former mayor Ronnie Wall to receive advice and learn more about the city’s goals.

“I got great input with him, watched a lot of the council videos and stuff just to review and take notes on how to do everything,” Baltutis said. “When the meeting starts, Ronnie Wall kicks it off, opens the meeting, get [the mayor] sworn in, hands off the gavel. You take your seat and the meeting is yours.”

After collecting input from several council members, Baltutis realized he wanted to allow for more discussion time during meetings so residents in attendance could have their concerns more fully addressed.

“By slowing down the meeting and allowing members to explain the reasons behind decisions and questions for staff,” he said. “Working through all that, folks can understand the decision process a little and get more background information about it.”

Though the first meeting went well, there was a split vote about a townhouse complex. Because the mayor gets a vote on all matters, Baltutis supported the decision to allow a 20-unit townhouse. In essence, his vote resulted in a 3-2 decision allowing the plans to be implimented.

“I was the deciding vote in my first meeting 15 minutes in,” he said.

He added how that particular final vote is reflective of a larger trend within the council.

“One of the things that I think you’ll see more from our council is less consensus but more problem-solving and more discussion,” he said. “We don’’t necessarily need a unanimous vote on everything. I think it’s actually better for the city if we address some issues that we’re not going to support unanimously.”

Baltutis now finds himself as the youngest mayor on record to serve as the city’s mayor. While he is proud of the position he is in, he works day and night to prove himself worthy of the title.

There is a learning to curve to being a young mayor. He must learn about the needs of his community. He must serve as a voice of the people he represents.

Today, Baltutis sees several needs within the community. At the top of his priority list is revitalizing the downtown area, putting Burlington on the map with larger communities and implementing the town’s 20-year strategic plan.

“We’ve seen increased interest in people being engaged on boards and commissions,” Baltutis said. “That’s speaking to that engagement and getting people going after the election and helping them find a place to be a leader in the community.”

Though Baltutis makes efforts to include more people in the political process, he is limited in his abilities because of the structure of local government.

He said he often receives requests from constituents to take unilateral action in offering assistance, but he has to remind people that smaller areas like Burlington operate in a weak mayoral system.

In this structure, mayors get one vote on the council and must go through an extensive process in implementing their agenda.

“A lot of folks think, ‘If I go talk to the mayor, it’ll get fixed if I just give him a call or send him an email,’” Baltutis said. “Being a weak mayor, my strongest point is advocacy and working on citizen engagement.”

Baltutis tells citizens he is willing to work with them but he cannot simply sign a document to fix their problems.

Jeff Colbert, adjunct instructor in political science at Elon University, said weak mayors might have more information than certain individuals in local government and be better able to delegate citizens’ issues to specific department. Nevertheless, authority is quite limited.

“Their powers are relatively weak, so they’re the face and voice of city government,” Colbert said. “Typically, there aren’t many other powers other than that.”

A proud  alumnus, Baltutis has spoken with Elon President Leo Lambert to address how Burlington and the university can become more engaged with one another.

Baltutis said he has discussed efforts to increase student engagement in the downtown area and ensure that critical questions start getting discussed.

“Dr. Lambert and I have talked about how we continue to connect our communities,” Baltutis said. “It’s four miles from Elon to the heart of downtown. So how can we build a connector, whether it’s a greenway or a bike path or even just a bus route? How do we keep students coming to downtown and get them more active in the community?”