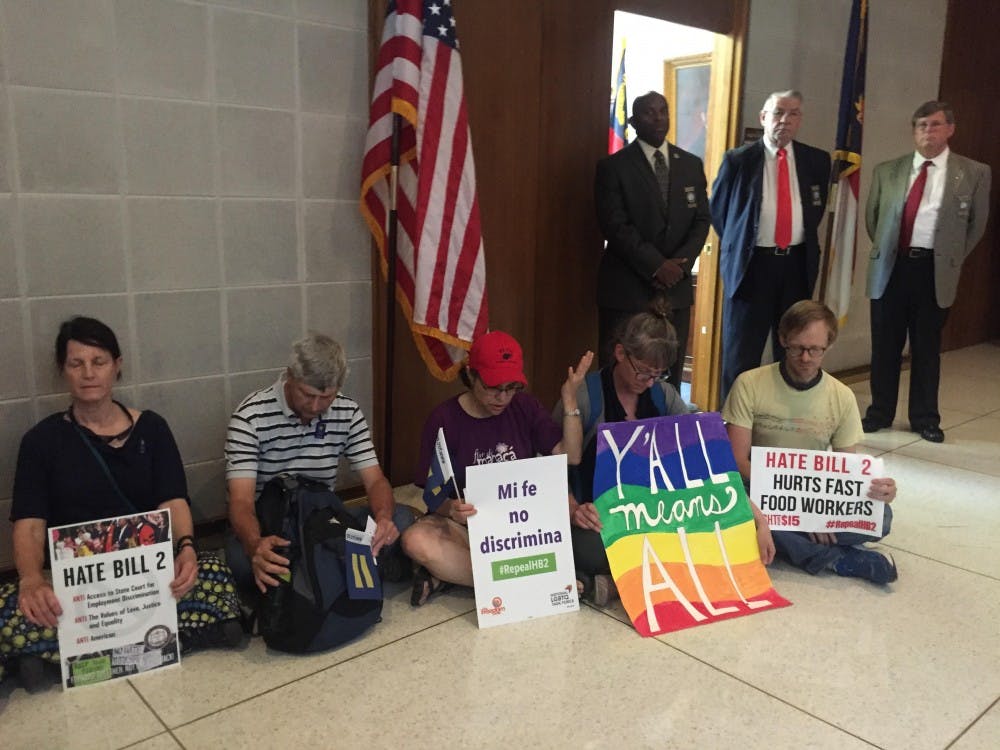 Protestors "sit-in" outside Speaker of the House Tim Moore's office in the North Carolina General Assembly building in Raleigh on Monday, April 25, 2016.

Monday brought the first day of the North Carolina General Assembly's "Short Session." It also brought thousands of protestors to downtown Raleigh, for an anti-House Bill 2 rally and sit-in at the state capitol.

Transgender woman and Charlotte-based pastor Debra Hopkins says the law, now in place for more than a month, puts her in  uncomfortable and potentially even dangerous situations. "You're forcing me now to go into a restroom where I will not only be harassed," Hopkins said, "I might become attacked, or even my life taken."

Hopkins says it is not just about LGBT rights.  The law also includes issues involving employment discrimination and minimum wage.

"We really need to advocate equality for all and pay attention to jobs, housing and decent wages for all of mankind. Not just the $7.25 which was enacted when I was in high school."

"Everyone should have these basic human rights," Belfer said. "The government is taking that away from us. We all need to stand in solidarity and fight for human rights."

Belfer worked as a marshall for the NAACP, handling crowd control throughout the sit-in. Though organizers stressed the rally and sit-in was symbolic in nature, Belfer says standing up for others rights is worth risking some of her own.

"This is something I am very passionate about, because equality can not be delayed we need to fight for equality now," Belfer said. "So yes, I would be willing to get arrested."

Protestors of all ages voiced their opinions on this controversial issue.