Elder members of the church reflect on memories 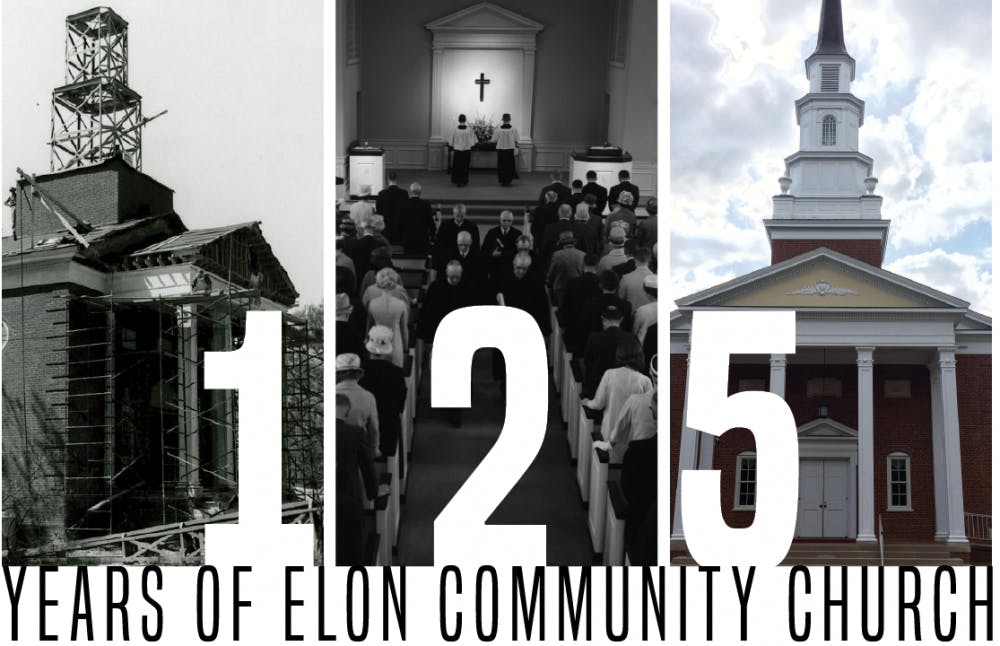 
The Elon Community Church has significantly evolved since its foundation date of April 19, 1891.

Elon University President Emeritus Earl Danieley wrote the Elon Community Church constitution from the back of his car while a student was driving him for a trip to Alabama. As Danieley laughed at the fact that he wrote the document on a portable typewriter he had placed on a piece of plywood across his knees, he could not help but think of the fond memories he has had with the church.

“I thought that this big historic occasion would be a good time to tell you because most of you Latter-day Saints didn’t know about that,” Danieley said. “I simply sat down and wrote it and brought it home, and, without apology, turned it over. We’re still using it today, and I thank God for the opportunity of serving in this church ”

Danieley was one of about 160 members of the Elon community gathered at the Elon Community Church, United Church of Christ Sunday in celebration of the church’s 125th anniversary.

The festivities began with a 10:30 a.m. service, which was then followed by an afternoon luncheon. As the church reflected back on its 19 founding members and the growth since its founding, it also embraced the future.

“We want to exhibit one very profound thing today, and that is thankfulness,” said senior pastor Randy Orwig during the service.

About 160 members of the Elon Community Church gather to celebrate the church's 125th anniversary during special April 17 service. Photo by Bryan Anderson.

Sunday was a day of thankfulness not only for the church’s rich history but also for the tremendous changes that have taken place within the past several decades.

The Elon Community Church finds itself with an identity today that is more separate from Elon University than ever before. But Orwig said caring for others is one characteristic that will always remain.

“We have a caretaking function, and I’m so glad we’ve been able to do that,” Orwig said. “We are builders, and we have more left to build ... In the last 25 years, we’ve seen something quite different. I ask you to celebrate the changes. There is more of a colorful sense of who we are in the last 25 years and a growing sense of diversity not unlike that of Elon University.”

Sunday’s service was unique in that it paid tribute to past members while embracing those who are just beginning to form a tighter-knit relationship with the church.

Rather than recognize the names of the 19 founding members, the church brought forward seven new members to the altar.

One of the newly accepted members was Richard Denault ’84. Elon has been a major part of Denault’s life ­— he even fell in love with his future wife, Dody ’81, during his time as a student.

After attending Elon Community Church on and off for the last couple of years, Denault decided it was time to become an official member because of the accepting message the church offered him and his family.

“The people are so nice and friendly, and you feel excited,” Denault said. “It makes my week go better seeing these people.”

During the service, Orwig made efforts to distinguish Elon Community Church as a place of inclusivity, accepting of all of its members.

“We are a part of a belonging,” Orwig said. “God says to us through Jesus Christ that we belong. There are many ways of being sent away or even trying to figure out what the future holds, but we are people who belong and we celebrate belonging.”

University Chaplain Jan Fuller attended the service and luncheon to acknowledge the historic occasion and represent the university’s commitment to future collaboration with the Elon Community Church.

Until September 1959, Whitley Auditorium was the main place of worship for Elon Community Church. Though the church has been in a new location ever since, its influence with the university community remains.

“This church has really been the church of the university or college for so many years,” Fuller said. “So many of our staff, faculty and students have been touched by this church and its ministries have come through this church and really consider this church home.”

Though the church celebrated its 125th anniversary on April 17, its official foundation date was April 19, 1891.

Elder members of the Elon Community offered personal stories of their bond with the church during the luncheon.

Edith Brannock ’39, the oldest active member of the Elon Community Church, provided one of the more inspirational moments of the day by talking about the historical significance of the 125th anniversary.