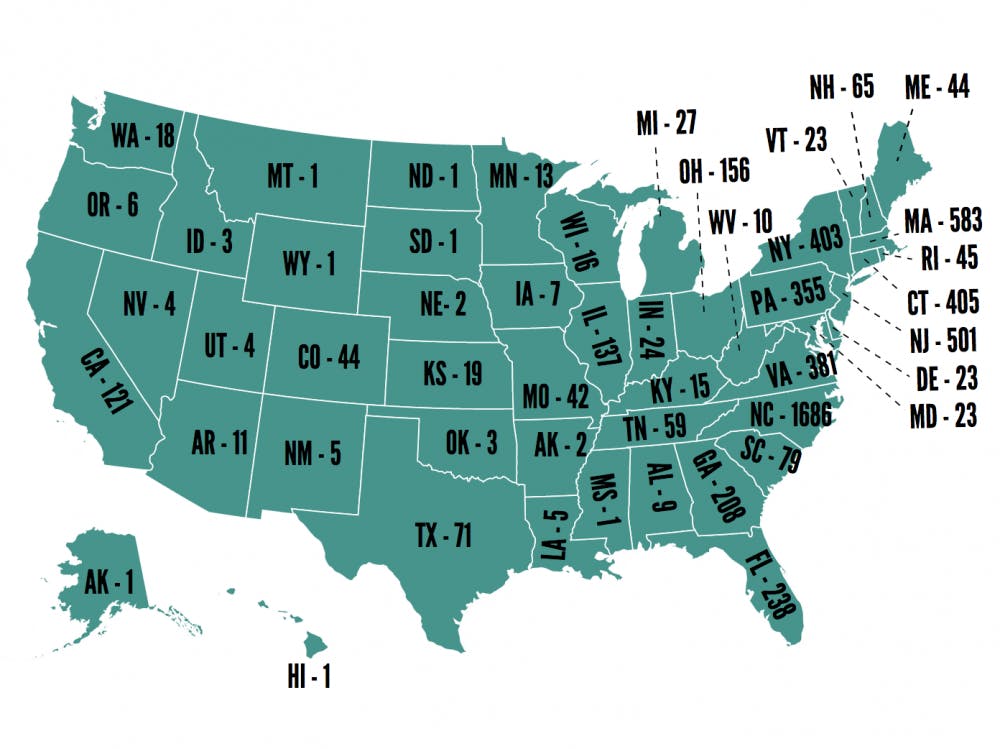 
Much of the Elon University student population is from out of state, causing high travel expenses.

When students say they are going home for spring break, “Are you driving or flying?” is often the follow-up question. With just 27 percent of students calling North Carolina home, students weigh the costs and benefits of different travel options for returning home for break.

Driving is a comparable option for those who live within a reasonable distance because it often comes with less of a financial cost than flying. Beth Lester is a junior who frequently drives to her home in Westport, Connecticut. She said she makes the drive not only for the cost, but also for the convenience.

“It’s definitely cheaper,” Lester said. “But I also work a lot while I’m at home for breaks, and if I didn’t drive I wouldn’t be able to get to where I need to be while my parents work. Being able to be independent and drive myself where I need when I’m home makes it worth it for me.”

Lester has done the 10-hour drive about five times. She said she’s getting used to the long hours spent driving and even has a plan for making the best time in getting back.

Since Lester knows how many students come from around her area, she often posts in the Elon University Facebook page offering her services to students who can’t afford plane tickets or change their plans to come home at the last minute.

Aside from Facebook posts and simple word-of-mouth on who is making the drive to various states, Elon offers an online posting space called RideShare, which launched in 2009 as a way to promote carpooling for students and staff.

Rideshare has recently partnered with a service called Zimride, which allows people to make a profile and post ride requests or offers. Zimride matches them accordingly with postings that meet their needs within the network. The website also allows users to see how long the drive is, where it falls on a map and how much money different drivers are requesting for gas and other expenses.

For some students, driving is a less desirable or unreasonable option because of distance. Since breaks are short and long drives can cut into the time students have to spend at home, flying is a popular option for students from several states.

Under Elon’s tuition and fees, personal expenses are listed at an estimated $2,600. This non-billable cost is a university estimate that factors in the cost of insurance, books and travel cost. This figure can quickly add up.

The average cost of a round-trip ticket to some of the most popular airports in New Jersey, New York and Massachusetts can run for $200 while students who are from West Coast states, such as California, are likely to pay upward of $400 to get home.

Sophomore Konnor Yurchak said he thinks the benefits of taking a plane home to Pennsylvania outweigh the costs.

“I don’t have a car, so I always fly,” Yurchak said. “And since flying is the easier and faster option, my parents don’t mind having to pay for the plane ticket. I guess it’s worth it for both me and them.”

For those students who chose to fly, Elon’s Facebook pages and RideShare site also advertise car rides going to airports.