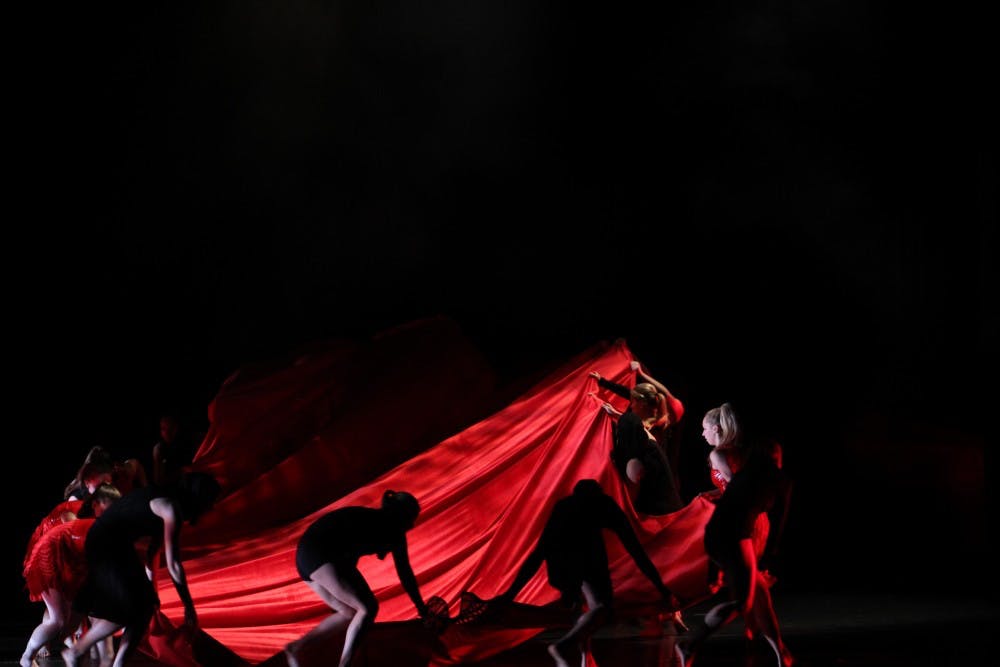 “Pulse” is usually used to describe heartbeat — but to Elon University’s dance majors and faculty it’s much more. The jittery beats of the heart have become the overarching theme of the emotions of the dance concert, “Pulse.”

This year’s annual spring dance concert, to be performed March 11-13 in McCrary Theatre, will be an evening of original, innovative dance production. There will be six dance pieces performed and choreographed by faculty members and guest artist Trent Williams, dance professor at the University of Florida.

Elon’s dance program hosts two main stage concerts, one in the fall and one in the spring. The fall concert features both faculty and student work, while the spring show features only faculty and guest work. Kearns brought Williams to campus during Winter Term to choreograph and rehearse a dance, hoping Williams would challenge and inspire current students pursuing dance.

“The whole evening is geared around a question that I posed to the choreographers: ‘What makes your pulse race?’” said Lauren Kearns, artistic director and associate professor of dance. “Is it excitement, laughter, fear, anger, seeking justice? I’m also one of the choreographers, so it’s also been fun to watch all the dance pieces.”

Each of the five faculty choreographers and Williams have taken creative approaches to answering this question through body movement and dance.

After posing her question, Kearns saw how engaging a snappy, quick title would capture the event.

“Every year for the spring dance concert, I pick a particular theme,” she said. “The theme this year was obviously, ‘What makes your pulse run?’ and I just thought that would be a great title, a short, to-the-point title.”

Each piece has a modern aesthetic, including contemporary ballet pieces, contemporary modern pieces and a humorous theatrical piece, all performed by Elon BFA dance majors and including three male musical theater majors.

Kearns is looking forward to audiences reacting to the eccentric costumes, lighting, music and heart-inspired pieces.

Junior Lucas Melfi is performing in three different pieces, each varying in terms of style. After working with Williams on a contemporary modern piece, Melfi said the theme is “salt” and dancers are tasked with portraying how it is used, how it affects society and what it represents.

When the dancers symbolize objects, each piece becomes drastically different in terms of genre and perspective of emotion.

“I think it will be fun for the audience to know that and then to see these six very different pieces,” Kearns said. “Fear gets my pulse racing, and I actually created a very large piece, and the German film ‘Nosferatu’ is a very big influence in the piece. There’s a lot of athleticism, driving and sinister forces at work in the piece.”

To create the diverse production, more than 50 student dances and production crew worked together, allowing for several groups of students the opportunity to collaborate on an original dance production. Senior Kayla McGrath has been rehearsing since October on her two contemporary and theatrical pieces with other dance majors and faculty choreographers.

“[Audiences] can expect a very eclectic show,” McGrath said. “There are a lot of large group numbers, which is very entertaining, and one duet. There are six total pieces, one by a guest choreographer, but most are contemporary or modern. There’s definitely something for everyone, especially with the theatrical piece at the end.”

The variation of style aims to shows the versatility of the dance department and its ability to capture and display emotion.

“I think it’s a dynamic concert,” Melfi said. “Every piece I’m a part of, I love to do. Each piece brings something different shows off different aspects of what we do as a dance department.”