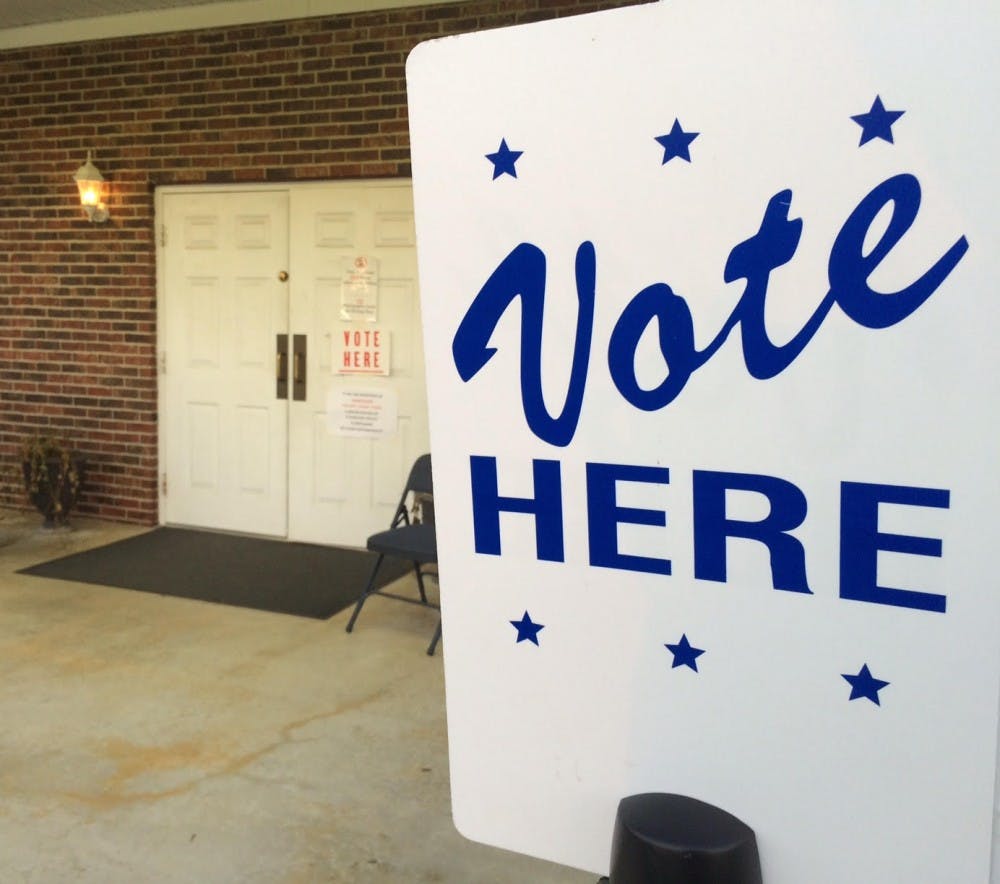 
At Elon's Antioch Community Church, voters were able to cast ballots for the North Carolina primaries.

There were few surprises in Tuesday's North Carolina primaries. Democratic frontrunner Hillary Clinton got nearly 55 percent of the votes, defeating Sen. Bernie Sanders (I-Vt.) by 13.8 percent. On the Republican side, businessman Donald Trump defeated Sen. Ted Cruz (R-Texas), but he only won by 3.4 percent.

As expected, McCrory's $2 billion Connect NC bond referendum — half of the $2 billion will go to the UNC system and $350 million to community colleges — passed easily with 65 percent of the total vote.

"There were no surprises in the slightly lower-level races going on," said Jason Husser, assistant director of the Elon University Poll and assistant professor of political science. "To me, what I was most surprised by was that Donald Trump didn't win even bigger than he did."

At the Antioch Community Church, the lone voting site in Elon, several members of the local community cast ballots because of the magnitude of the 2016 presidential election.

Hugh Fields, a former student who attended Elon during the 1970s, said he has always felt it was his patriotic duty to vote. Though he has voted since he was 18, he recognized this election could be the most important one of his lifetime.

"This one is all up in the air because on one side, issues are not being discussed," Fields said. "And then there's a lot of distrust about several of the candidates on either side."

Burlington resident Debbie Jacobs said she went to the Antioch Community Church to vote for Sanders because of his proposals and his optimism.

"He is talking about issues and he is also talking about specific things he's going to do for this country," Jacobs said. "Some of it might happen, some of it might not. He has dreams like all of us do, and I think he could make something really happen if he wins. He's got so much experience behind him and he's very knowledgeable."

Video Clip: Local residents explain what they look for in a candidate and why they come out to vote.

Though much spotlight was placed on the presidential race, there were several other important elections and proposals.

McCrory and Cooper, the two candidates now squaring off in the gubernatorial race, were decided by an overwhelming majority along with Burr and Ross in the senatorial race.

Husser said he expects the McCrory-Cooper election to be the most contentious gubernatorial race in the general election.

"I expect the McCrory-Cooper race will be the most heavily contested gubernatorial race in the United States," Husser said. "It will probably be the most expensive governor's race in the country."

He explained how the passage of the $2 billion Connect NC bond referendum could give McCrory an advantage going into the general election, but he also recognized Cooper is highly regarded because of his experience as Attorney General.

Though the United States is often considered divided when it comes to politics, one universal point of agreement local residents expressed while at the Antioch Community Church was the importance of voting.

"If you don't vote, you don't get your pick," Jacobs said.

"I think it's a patriotic thing to do," Fields added.

North Carolina played a key role in Super Tuesday. While overwhelming support for Clinton allowed her to obtain a significant number of delegates and put her closer to a Democratic nomination, the neck-and-neck race between Trump and Cruz lowered Trump's chances of capturing the 1,237 required number of delegates for the Republican Party nomination.

Beyond the Tar Heel State, Ohio Gov. John Kasich won all 66 delegates in his home state while Rubio lost badly in his home state of Florida. Not only did Trump capture all 99 delegates, he also secured nearly 20 percent more votes than Rubio. Shortly after the results were announced, Rubio decided to suspend his campaign.

With a three-man Republican race between Trump, Cruz and Kasich and a two-person Democratic field with Clinton dominating Sanders, the 2016 presidential election is growing increasingly suspenseful.

"It's been a long time that a primary was this consequential," Husser said. "And North Carolina today made some big decisions."