A letter to the dinosaurs of the 21st century 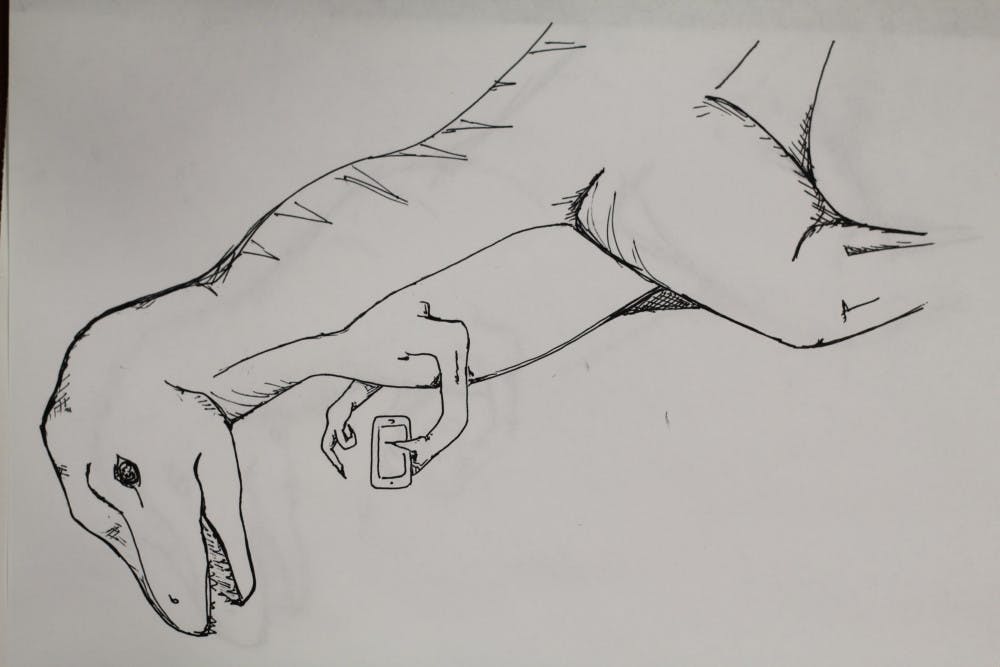 We’ve all seen the political cartoons: A group of Millennials, maybe at a party or on an airplane or subway, have their eyes on their phones instead of each other.

The point? Technology is destroying culture and conversation. No one talks anymore unless it’s over the airwaves — or however these newfangled devices work.

Hate to break it to you, dinosaurs of the 21st century, but everything is technology. A pencil is technology — and the yellow sticks of doom aren’t keeping anyone from calling their grandmothers on Sundays.

Let’s take it back, shall we? Back to a few key moments in anti-tech history.

Ancient Greece was an oral culture. Traveling bards like Homer told vast epics like “The Odyssey” completely from memory, and speakers in the Athenian Assembly utilized a variety of intricate mnemonic devices to memorize their speeches instead of writing them down.

Even Plato warned against writing as a learning strategy, saying it will “create forgetfulness in the learners’ souls, because they will not use their memories.”

Meaning, writing will rot your brain. Sound familiar, 21st century dinos? Replace “writing” with any “new technology plaguing the youth of today,” like video games or social media, and you’ve got a Facebook mom status.

Fast forward a few millennia to one of the most polarizing inventions in the history of publishing: the printing press.

Throughout the Medieval Era, books had to be copied laboriously by hand by monks. This process, called illuminating, was artistic, but hardly efficient.

Round about the 1440s, Johannes Gutenberg literally revolutionized the publishing process when he rolled out the first books printed en masse.

The ability to print as many identical copies of a book as you want? Yes, please. The benefits are endless, especially to an increasingly entrepreneurial and literate Europe.

But not everyone saw it that way. Your ancestors, 21st century dinos, were probably the people who said then what you’re
saying now.

Back then, naysayers thought that mass printing books would destroy the art of bookmaking, that monks would get lazy without all that copying to do, that printed books just weren’t up to the same standard as the monks’ work… etc.

Doesn’t that sound like the same worries of early 2000s moms who thought the ability to spell words correctly would collapse under the combined menace of texting and spell check? I bet y’all were the ones clutching your dictionaries then, too, 21st century dinos.

Here’s the thing: Every time a new innovation makes us reconsider our understanding of how we interact with one another in the world, there are people who cling to the way things were as a security blanket. These people harken back to the good ol’ days of the same technology that their technophobic ancestors fought.

That newest complaint? That no one talks to anyone else anymore, that we spend all our time on our phones and no time talking to the people sitting next to us?

Just look back to the popularization of newspapers, and you’ll find exactly the same arguments about commuting professionals reading papers on the subway instead of engaging in conversation with their traveling partners. It’s the same complaint, just with a newspaper instead of an iPhone.

We’re able to engage in conversations about topics we’d never even know about with people we’d never have met if it weren’t for the innovations of people who ignored the haters and pioneered the Digital Age.

As long as there is innovation, there will be those who naysay. But that shouldn’t discourage us from innovating anyway or from learning how to interact with exciting new technology. So be polite to the 21st century dinos — nod and smile — then go back and enjoy your much more interesting life. They’ll catch up eventually.