Elon faculty get involved in electioneering 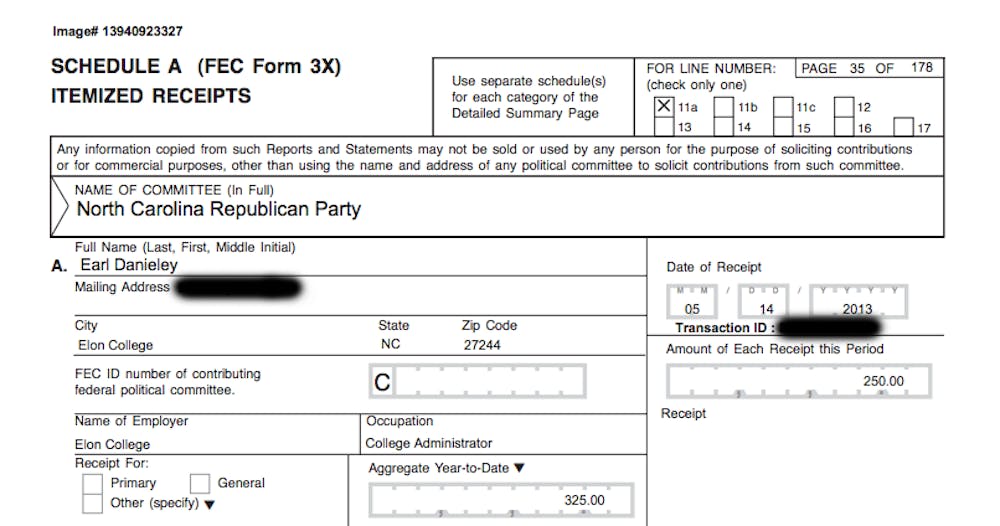 
Elon Univeristy President Emeritus Earl Danieley is one of many university staff members who have contributed to political candidates.

The 2016 U.S. presidential election has motivated millions of people from across the United States to contribute to their preferred candidates. Members of the Elon University community have had, and still have, a role in shaping who wins local, state and national elections.

By law, political candidates are required to submit regular filings to the Federal Election Commission (FEC). While there is a bit of a gray area in campaign finance, it is fairly easy to learn which individuals contribute to which candidates.

And with 2016 being an election year, it is worth examining how the Elon community seeks to exert influence in the political system.

Before analyzing which individuals have contributed to which candidates, it is important to note that FEC data available online through individual advanced searches only includes financial activity from 1997 through the most recent filing period. Moreover, it is difficult to obtain and analyze a larger history of campaign contributions.

Additionally, there are certain limits as to how much money individuals can contribute. For the 2016 presidential election, the maximum amount an individual may give to a candidate’s campaign committee is $2,700. The FEC has reported very little activity from Elon students and faculty this year, but has reported much activity in previous years for non-presidential elections.

Based on this data, it is fair to say contributors who have supported candidates while being employed by Elon College or Elon University have generally leaned toward the Democratic Party. Influential figures like previous presidents have made contributions in the past.

Given the limitations, there are still noteworthy findings about campaign finance through Elon contributors.

Former Elon President James Fred Young contributed more than $3,000 to John Kerry and the Democratic Party between 2001 and 2006. Young’s smallest contribution occurred in 2001 when he contributed $250 to the Democratic National Committee (DNC).

Young became more economically invested in February 2004 by supporting John Edwards for president when George W. Bush was running for a second term in office. He contributed $500 to Edwards’ campaign, but John Kerry eventually secured the Democratic Party’s nomination. In July 2004, Young contributed $2,000 to Kerry.

When Bush was elected president, Young only made one more political contribution: a $300 donation to the DNC.

Young wasn’t the only Elon president to have contributed.

President Emeritus Earl Danieley’s first contribution through the FEC on record occurred in 2008 when he contributed $200 to North Carolina Republican Elizabeth Dole’s senatorial campaign. Dole ran for re-election for a second term but lost by 8.5 percent of the popular vote to Kay Hagan.

In 2013, Danieley made two contributions one month apart to the North Carolina Republican Party. The combined total was $460.

When searching through contributions with Elon University as the searched employer, only one result came up for individuals who have contributed a 2016 presidential candidate.

Upon further review, the individual listed was a student who contributed $2,700 to former Florida Gov. Jeb Bush.

Outside of this election, there has been heavy involvement from professors in previous elections. Not surprisingly, a significant portion of professors who have contributed are teaching at Elon Law.

Johnson made the largest number of contributions with a total of 15 — all of which were made to President Barack Obama for his 2012 re-election campaign. Johnson’s contributions totaled $3,750.

While much information has been provided, there is more that is widely available. For example, every contributor’s zip code and mailing address is easily accessible through the FEC’s campaign finance disclosure portal.

Such accessibility can be both a powerful and a dangerous tool for gaining insight into the political makeup of a population.

Only time will tell how involved members of the Elon community choose to become in the 2016 presidential election.

Note: Per the FEC, campaigns must identify anyone who gives more than $200 or if total donations add up to $200 (but sometimes they'll request information from those who donate less and publish that, too): http://www.fec.gov/pages/brochures/citizens.shtml.