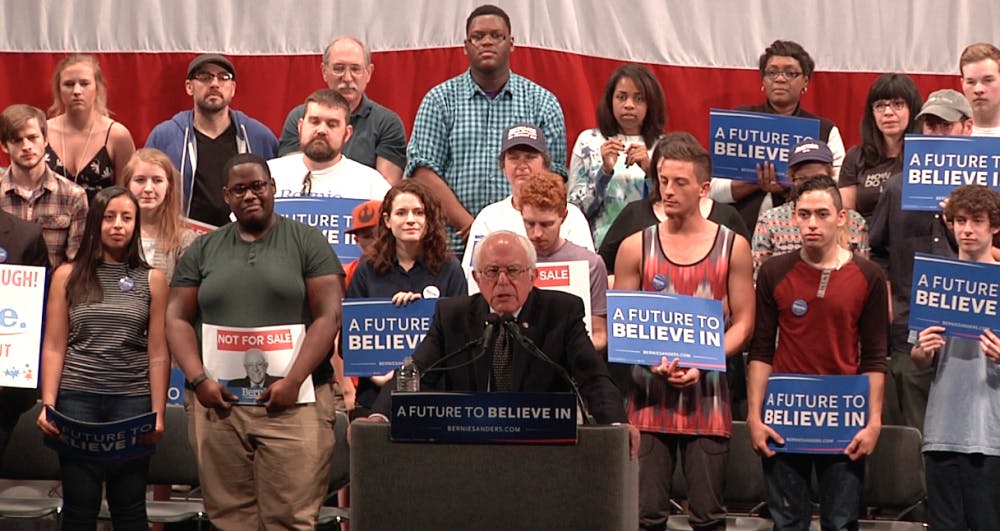 RALEIGH-- Democratic presidential hopeful Sen. Bernie Sanders drew thousands of supporters to a rally in Raleigh on Friday afternoon, four days before North Carolina and four other states are set to vote in their primary elections.

More than a thousand people couldn't make it into Memorial Auditorium, which seats 2,300, and supporters were lined up more than five hours before the event began.

The crowd of primarily young people was loud, cheering and chanting Sanders name from the moment the doors opened two hours before the candidate was set to arrive.

In his speech, Sanders went over many of his campaign's talking points, including student debt, campaign finance reform, universal healthcare, minimum wage and the environment, among other other topics.

"When you have these horrendous Super PACs, which are funded by Wall Street and billionaires," Sanders said. "When you have one family, the Koch brothers, and a few of their billionaire friends spending some nine hundred million dollars in this campaign cycle, to elect candidates who represent the rich and the powerful, that is not what democracy is about, that is called oligarchy... And together we are going to end that cancer on American democracy. We're going to overturn Citizens United and move to public funding of elections."

"[Clinton] has raised substantial amounts of money, from the drug companies, from the fossil fuel industry," Sanders said. "You don't have to be a PhD in political science to understand that you cannot be an agent for real change in this country when you take huge amounts of money from the most powerful special interest."

Sanders railed against Republicans for their rejection of climate change, saying that they cared more about campaign contributors in the fossil fuel industry than the future of the country.

He also embraced his "radical ideas", such as Universal Healthcare and free public college tuition.

"Health care is a right of all people, not a privilege," said Sanders. "That is why I believe we must move to Medicare for all program."

Sanders ended his speech calling for those in attendance to make sure they vote and to encourage others to vote.

"If we can get a large voter turnout, if many, many people stand up and fight back and tell us that our government belongs to all of us and not a handful of campaign contributors - if that happens, we're going to win here in North Carolina and other states as well," he said.

Tanith Fortney, 18, will be attending Western Kentucky University next fall and said after the rally that Sanders' plan for free public tuition was a big reason for her support.

"I'm going into college soon and I'm going to have $100,000 in debt and I can't pay that," Fortney said. "I don't understand why it's so expensive to go to school. College is a necessity now. You can't do anything without going to college and I'm so excited to be part of this giant movement and can't wait to see what he's going to do.

But Sanders has a lot of ground to make up if he wants to win when North Carolina votes on Tuesday. A High Point University poll, released on Friday, shows Clinton leading Sanders 58 percent to 34 percent among likely Democratic primary voters in state.